Learning from her life, Korean woman works to help others 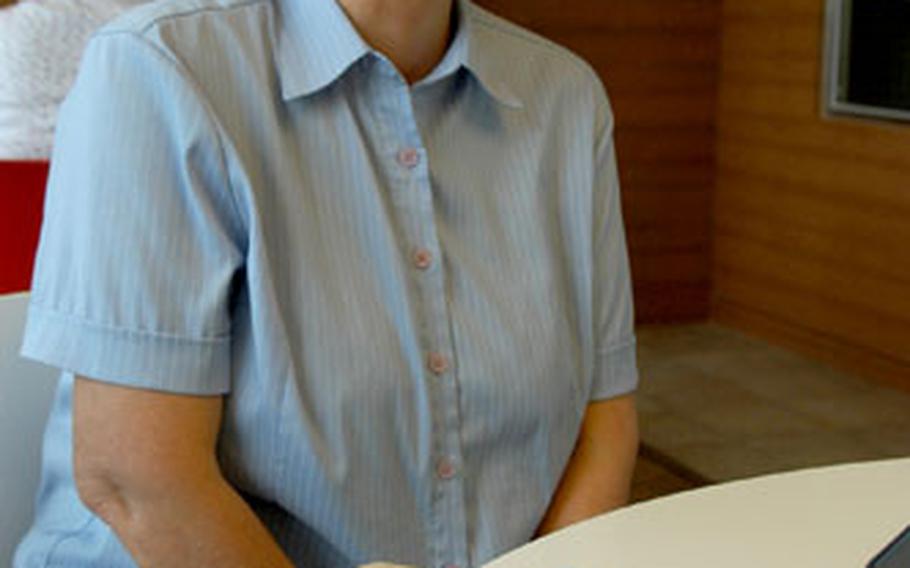 Kim Yeon-ja laughs during a talk about her memoir, “The Big Sister in American Town Bawls Until the Last Five Minutes Before Her Death.” Kim, 62, was a prostitute at bars that catered to U.S. servicemembers when she was in her 20s. Now she is trying to help other Korean women avoid becoming prostitutes. (Teri Weaver / S&S)

SEOUL &#8212; At one point in her life, in the midst of prostitution and alcohol abuse, Kim Yeon-ja wanted most to save a little money, return to her mother&#8217;s home at South Korea&#8217;s southern tip and open a bakery.

Kim said the savings plan worked while she was a prostitute during her 20s, in Dongducheon and then Songtan, towns just outside U.S. military bases. She even earned enough to buy a house in Songtan.

But she started playing blackjack and ended up losing everything.

Now, decades later, she&#8217;s back in Songtan, helping younger Korean women who are prostitutes, who have children with no fathers or who might be on the brink of becoming prostitutes in order to make a living.

Lee Kyung-sil, a pastor at Korea Methodist Church in Seoul, is director of Hope Sharing Center.

To help educate the women about the harsh realities of trading sex for money and the future it holds, Kim said, she wrote a memoir describing her life as a prostitute. &#8220;The Big Sister in American Town Bawls Until the Last Five Minutes Before Her Death&#8221; was published in June.

Kim, now 62, wrote the book as a warning to other women about the dangers of prostitution and the cultural differences that sometimes arise when Americans and Koreans date, have sex and fall in love, she said through an interpreter during an interview earlier this month.

A turning point for her came a few years ago when she visited a New York City shelter where Korean women went for help after being abandoned by their American husbands. She weeps when she talks about how helpless they were without the language skills or education needed to earn enough money to make ends meet.

She came back to South Korea with hopes of helping other Korean women have more choices about their jobs and their lives. She and about 10 other women opened Hope Sharing Center earlier this summer.

Kim wants the center to grow into an educational center, where women can come to learn job skills and work on their English. She also wants to set up a tutoring system for the women&#8217;s children, who are often mixed race and shunned in certain Korean societies.

Kim thinks both the Korean and U.S. governments should work together to give more support to women who may become prostitutes whose customers include U.S. servicemembers. She said she wished the governments would invest in off-base centers for women at risk.

USFK&#8217;s public affairs office did not respond to a query from Sept. 9 about what help already might be available through its efforts to combat prostitution and human trafficking.

Goh Hyun-ung is the head of the International Organization for Migration in Seoul, a group that keeps track of proposed policies and legislation related to prostitution and human trafficking. He said he knew of no policy currently aimed at preventing prostitution. Most of the Korean government&#8217;s recent efforts to crack down on prostitution are aimed at punishing the customers and sex brokers, he said.

Hope Sharing Center is looking for volunteers to help teach English to Korean women at the center&#8217;s newly opened office in Songtan. To learn more, call Lee Kyung-sil at 011-449-5429.