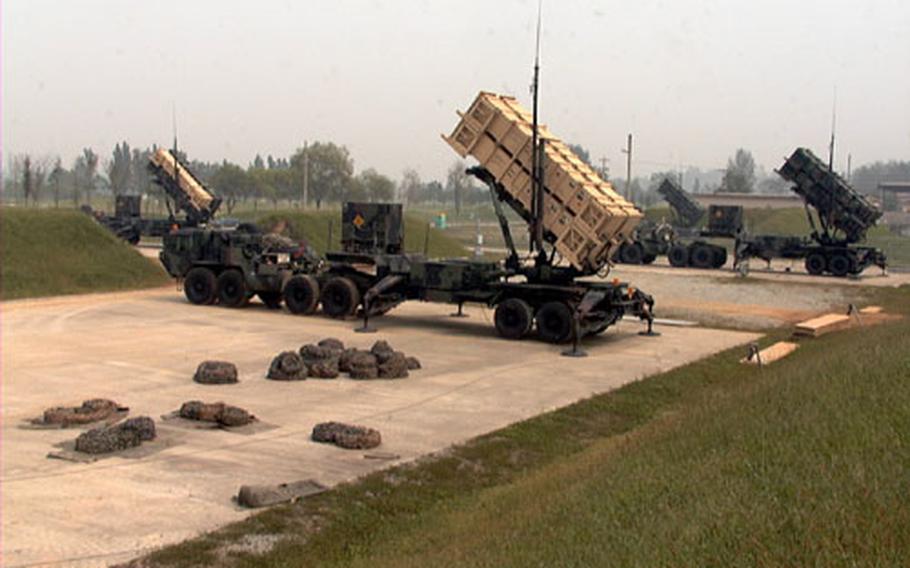 At Osan Air Base, South Korea, some of the U.S. Army&#39;s Patriot PAC-2 missiles in place to counter missile strikes against air bases in South Korea. The U.S. military recently added the newer PAC-3 "hit-to-kill" variant to its Patriot force in South Korea. (Franklin Fisher / S&S)

OSAN AIR BASE, South Korea &#8212; Army Spc. Alan Laughter&#8217;s job is to help blast North Korean missiles out of the sky before they can slam into South Korean air bases.

Laughter is with the U.S. Army unit that has Patriot missile batteries ready around the clock at three air bases on the peninsula. His job is to hit the firing button that sends a Patriot thrusting skyward at incoming missiles.

So Laughter, pronounced &#8220;Lawter,&#8221; of Battery C, 1st Battalion, 43rd Air Defense Artillery Regiment, is glad his unit has added a more lethal version of the Patriot to its inventory.

Called the Patriot Advanced Capability-3, or PAC-3, the battalion has placed them alongside its arsenal of PAC-2 Patriots already poised in their boxlike launch canisters.

Besides its Patriots at Osan, the battalion has batteries at Kunsan Air Base and Suwon Air Base, a South Korean air force installation where the unit is headquartered.

The PAC-3 is smaller than the PAC-2, so 16 missiles will fit onto a launcher that would accommodate only four of the earlier version.

And the PAC-3 is more accurate, faster and easier to maintain than the PAC-2, with a longer range, Pendergast said.

&#8220;But the big bang for the buck is the missile itself,&#8221; he said. &#8220;The basic differences are hardware and software. The PAC-2 missile had a warhead on it that would explode in close proximity to the target we were shooting at.&#8221;

Citing security concerns, the Army won&#8217;t divulge the PAC-3&#8217;s speed or range, nor the number of Patriots it has in South Korea.

Though the PAC-3 relies on &#8220;hit-to-kill&#8221; when used against a ballistic missile, it also has a small-blast fragmentation warhead, a &#8220;lethality enhancer&#8221; in case it has to be used against a plane, helicopter or cruise missile.

North Korea has indicated it is pursuing a robust missile program. The communist nation possesses missiles that can strike anywhere in South Korea and parts of Japan.

The PAC-3 upgrades in South Korea are part of a U.S. plan to spend $11 million over the next three years to bolster its forces on the peninsula.