Capt. Richard Tyson, an internal medicine doctor at Yokota Air Base, demonstrates the use of a portable ventilator with a mannequin. (Jennifer H. Svan / S&S)

Capt. Richard Tyson, an internal medicine doctor at Yokota Air Base, demonstrates the use of a portable ventilator with a mannequin. (Jennifer H. Svan / S&S) Most equipment in the Expeditionary Medical Support package is lightweight and portable. Here, a tube takes dental x-rays, which are transmitted to a laptop computer for review. (Jennifer H. Svan / S&S) 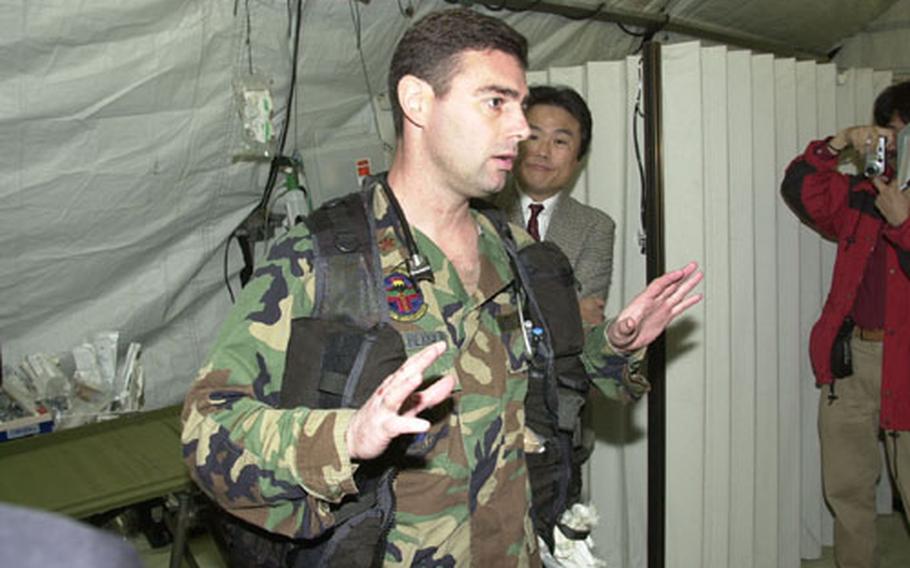 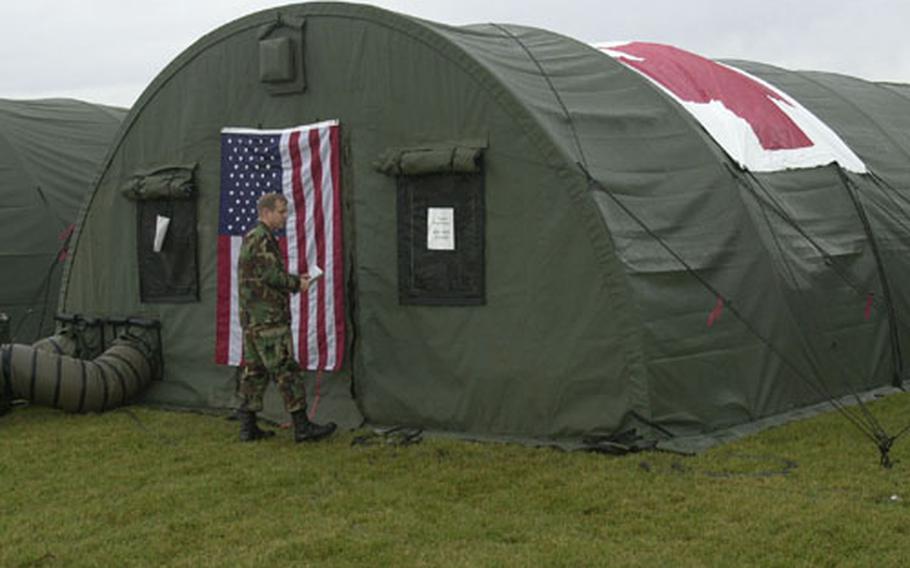 The Expeditionary Medical Support team set up its 25-bed mobile hospital in Alaskan shelters &#8212; green tents resembling cavernous igloos. Team members are treating patients with portable, lightweight medical equipment in an exercise to practice for the real thing: deploying to a combat zone or natural disaster.

The exercise this week marks the third time the 86-member team has deployed or trained together, said Lt. Col. Mike Culhane, EMEDS commander. The team most recently deployed to Guam in December to help recovery efforts after Super Typhoon Pongsona.

Lessons learned then, during the team&#8217;s first real-world deployment, reinforced the need for training, Culhane said: &#8220;We learned that training with the actual EMEDS equipment is critical prior to deploying because some of the equipment is different from what we use day-to-day&#8221; &#8212; equipment such as a battery-operated, portable ultrasound machine not much larger than a textbook.

Just as in the hospital, technicians can use the small ultrasound to look for internal bleeding. It&#8217;s a different machine but &#8220;the same standard of care,&#8221; said Maj. Mary Guye, a general surgeon.

Some field medical supplies are even smaller: The first EMEDS doctors who deploy pack their tools in a trauma vest and backpack that can weigh 60 pounds. That initial EMEDS team can perform up to 10 emergency surgeries or 20 non-operative resuscitations before the tents and mobile emergency room arrives, said Maj. Patrick Muehlberger, an emergency medical physician.

As the medical team expands, it can provide more specialized treatment, such as dental and lab work. The Air Force dentists can do everything in the field except orthodontics, said dentist Victor Maggio, a major.

The 374th Medical Group&#8217;s EMEDS team is the only Air Force unit of its kind in the western Pacific. In the Air Force, the concept of a lightweight field hospital that could deploy quickly evolved after Operation Desert Storm, said Capt. Terrell Freeman, medical readiness flight commander.

Other services already are eying the EMEDS concept. The field hospital was opened up Wednesday to a bevy of visitors, from media representatives and Japanese government officials to Army and Navy medical planners.