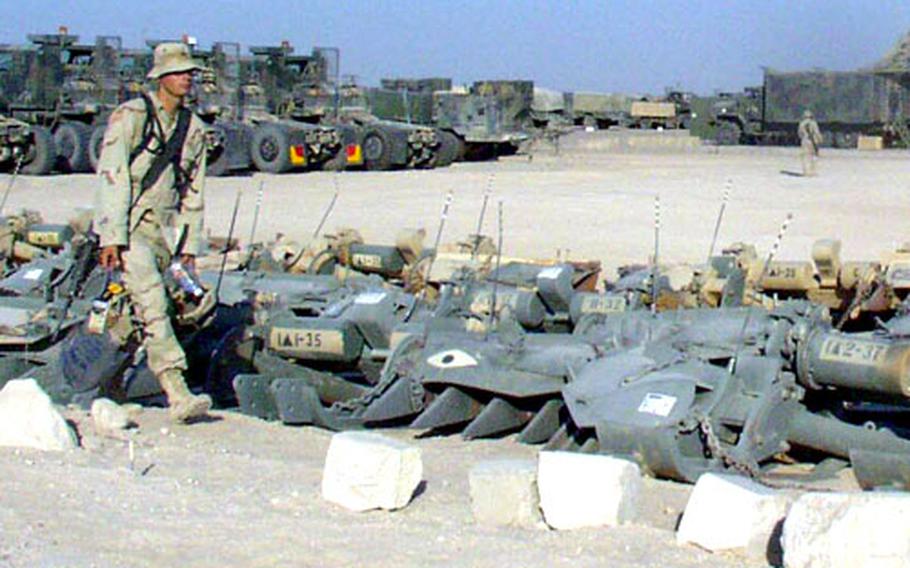 A soldier walks by tank attachments used to clear land mines at Camp Dogwood, south of Baghdad. Though living conditions in Iraq are expected to improve greatly as time passes, many troops are concerned with deeper issues. Decisions made by the leaders of the armed forces on issues such as length of deployment and troop rotations will do more to decide the experience of servicemembers in Iraq than anything else, both troops and observers say. (Scott Schonauer / S&S)

A soldier walks by tank attachments used to clear land mines at Camp Dogwood, south of Baghdad. Though living conditions in Iraq are expected to improve greatly as time passes, many troops are concerned with deeper issues. Decisions made by the leaders of the armed forces on issues such as length of deployment and troop rotations will do more to decide the experience of servicemembers in Iraq than anything else, both troops and observers say. (Scott Schonauer / S&S) 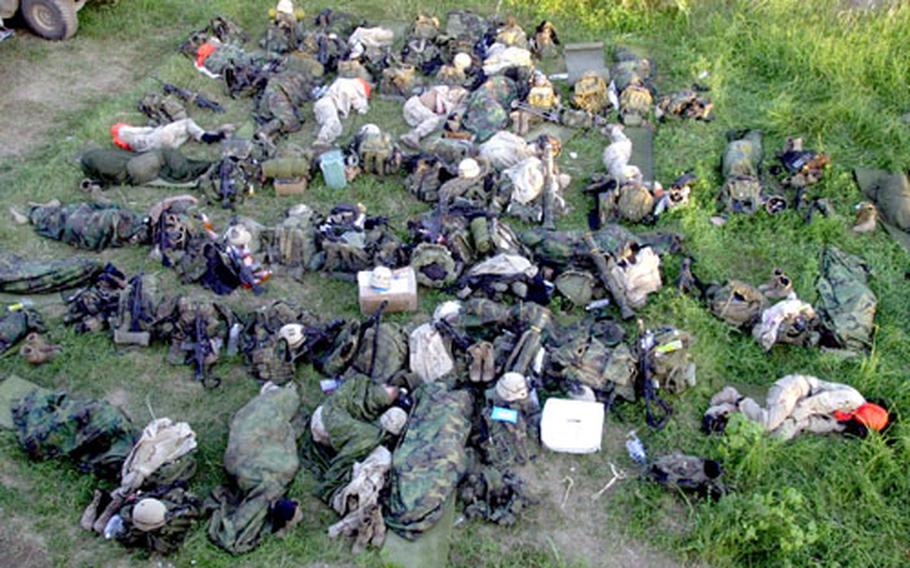 Soldiers with Company A, 1st Battalion, 508th Infantry Regiment find a place to sleep where they can at a patrol base near the Tigris River. (Jon R. Anderson / S&S) 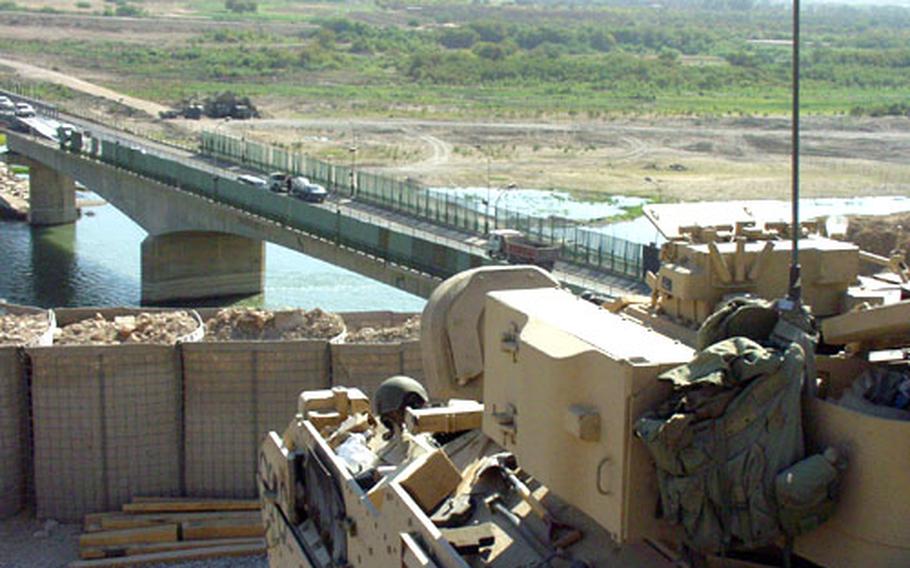 A Bradley Fighting Vehicle looks over a nearby bridge outside of Tikrit, Iraq. Plans are in place to vastly improve the living conditions in Iraq, but troops still have concerns. (Jon R. Anderson / S&S)

Day Seven of a seven-day Stars and Stripes series on conditions and morale in Iraq.

The typical private arriving in Iraq next spring more than likely will live far better than even some generals do now.

He will sleep in a building with solid walls that is heated in the winter and air conditioned the rest of the year. He&rsquo;ll eat three or four meals of plentiful, tasty food each day, have ready access to the Internet, and watch any of six American Forces Network channels on television in his spare time &mdash; that is, when he&rsquo;s not playing video games or watching DVDs on his personal player.

He may even get a chance to take weekend MWR trips outside the battle zone, and go home for 15 days in the middle of his tour. In short, he&rsquo;ll live better than any soldier before him in the long history of warfare, thanks to efforts already begun by U.S. military commanders in the Middle East.

What is not guaranteed, say close observers of the U.S. military in Iraq, is that they&rsquo;ll be much happier than the current crop of troops, many of whom told Stars and Stripes in a recent questionnaire that they are hot, tired, bored, homesick and disillusioned.

While they welcome better living conditions, hundreds of troops said they are unhappy for deeper reasons that are not as easily fixed. Some have lost confidence in leaders who often can&rsquo;t tell them clearly what their mission is or who keep postponing the date they can go home to their families. Most of all, they&rsquo;re worried about an operations tempo that threatens to keep them at war more than at home for years to come.

&ldquo;A lot of stuff we&rsquo;re doing here doesn&rsquo;t make any sense at all,&rdquo; said a 21-year-old 101st Airborne Division infantryman at Qayyarah West air base. &ldquo;Now that we&rsquo;ve been lied to, we don&rsquo;t trust anyone. They could turn this place into the nicest living conditions, and it still wouldn&rsquo;t matter if they&rsquo;re going to keep us here for a year.&rdquo;

Some critics have blamed a na&iuml;ve media for mistaking the routine grumbling of troops in the field for a crisis in military morale. There&rsquo;s no question that bellyaching in the barracks is a sport as old as war itself.

&ldquo;Soldiers gripe, because that&rsquo;s what soldiers do,&rdquo; wrote a 26-year-old 4th Infantry Division staff sergeant on a Stars and Stripes questionnaire. &ldquo;We could be in the middle of Hawaii, and people would complain.&rdquo;

But last spring&rsquo;s good-natured griping about lousy food and no showers has given way to edgier complaints about inequality among the forces and lack of confidence in their leaders. About one-third of the nearly 2,000 troops questioned by Stars and Stripes in August &mdash; and 54 percent of those who rated their own morale as low &mdash; doubted the value of fighting the war in Iraq.

Improving living conditions certainly will make troops more comfortable. It may even help them do their jobs better. The Air Force is famous for making sure its troops live well no matter where they are stationed.

&ldquo;There&rsquo;s a light year&rsquo;s difference between the airman who&rsquo;s had the opportunity to relax [and one who hasn&rsquo;t],&rdquo; said Col. Jim Callahan, commander of Air Force troops at Kirkuk air base. &ldquo;He&rsquo;ll be more focused, far more combat-effective.

Giving soldiers better camps and more rest is important, said David Hackworth, a retired Army colonel and self-styled crusader for the well-being of the common soldier. But it&rsquo;s not everything.

&ldquo;Spirit is more important than all the cappuccino you slop down their throats,&rdquo; Hackworth said. &ldquo;Morale is everything. You give me 10 spirited soldiers, and I&rsquo;ll take on 100 who don&rsquo;t give a rat&rsquo;s ass.&rdquo;

Hackworth thinks morale in Iraq can only be fixed with strong, down-to-earth, mission-oriented leadership.

&ldquo;There&rsquo;s a disconnect between the top and the bottom,&rdquo; Hackworth said. &ldquo;The magic panacea is caring leadership, leadership that&rsquo;s down with the troops, talking to them. That&rsquo;s what&rsquo;s missing now in the U.S. Army.&rdquo;

He praises Gen. John Abizaid, the new head of coalition forces in Iraq, as the kind of hands-on leader who can fix morale.

&ldquo;He&rsquo;s going to have to go out and grab a bunch of generals, a bunch of colonels, and thunk their heads together,&rdquo; Hackworth said. &ldquo;The officer corps, from 2nd lieutenant to four-star general, needs to look in the mirror.&rdquo;

But even Abizaid can&rsquo;t solve the problem of a military &mdash; especially the Army &mdash; that is stretched to its limits. About 130,000 soldiers are currently on duty in the Middle East, including five of the Army&rsquo;s 10 divisions.

Even the greenest soldier can figure out he or she is likely to spend every other year in Iraq until things stabilize and forces can be reduced, a prospect that now seems far away. Next spring, thousands of unlucky soldiers likely will find themselves rotating from a unit that has just finished a year in Iraq to one that is just arriving.

&ldquo;The big question is, will this become a semipermanent mission?&rdquo; said Tom Donnelly, a military affairs analyst for the American Enterprise Institute in Washington.

&ldquo;Are [soldiers] looking at a career that is measured by constant duty in Iraq?&rdquo;

Forty-nine percent of the soldiers Stars and Stripes surveyed said they were unlikely to stay in the Army after their current tour is over. The figure jumped to 74 percent for those who rated their own morale as low.

&ldquo;We&rsquo;re not an Army of draftees, like in Vietnam. You&rsquo;ve got to give me some time with my family,&rdquo; said Staff Sgt. Scott Riley, 29, of the 101st Airborne. &ldquo;I have a rock-solid marriage, but my wife gave me an ultimatum: it&rsquo;s her or the Army.&rdquo;

Michael O&rsquo;Hanlon, a military analyst at the Brookings Institution in Washington, said the burden in Iraq is about twice as heavy as the Army can bear. In a column written for The Washington Post in July, he proposed a series of measures that might help the service through this rough patch. The Bush administration already is trying some of them:

&para; Temporarily add 10,000 to 20,000 troops to the Army, a step he acknowledges would be costly and time-consuming.

&para; Make the Marine Corps a full partner of the Army in peacekeeping, reducing the Corps&rsquo; presence in Okinawa.

&para; Establish any new bases added in Eastern Europe as part of the Defense Department&rsquo;s &ldquo;transformation&rdquo; in areas where troops can be accompanied by their families.

In an interview with Stars and Stripes earlier this month shortly after he had visited troops in Iraq, O&rsquo;Hanlon said the pace of deployments is at the top of their list of concerns.

He said President Bush had taken a large gamble by stretching U.S. forces so thin, hoping the extra burden won&rsquo;t cause a mass exodus of soldiers, reservists and National Guardsmen.

&ldquo;Definitely, the Pentagon is assuming they&rsquo;ll suck it up and drive on,&rdquo; O&rsquo;Hanlon said. &ldquo;If the assumption proves wrong, then you&rsquo;ve broken the finest volunteer Army in history.&rdquo;

Until more foreign troops can be found or the country turns peaceful enough that American forces can leave, U.S. commanders must do their best to keep their lonely, listless troops motivated. How well they meet that challenge will determine if the Army can weather the war on terror.

If they&rsquo;re looking for inspiration, they may want to chat with Spc. John Stubbs, 20, of College Station, Texas. Six months into his Middle East rotation with the 101st Airborne, he&rsquo;s as excited to be in Iraq as the day he arrived.

&ldquo;Everybody here joined for a reason higher than ourselves, but having this experience makes you understand what your oath means,&rdquo; said Stubbs, whose father served in the first Gulf War.