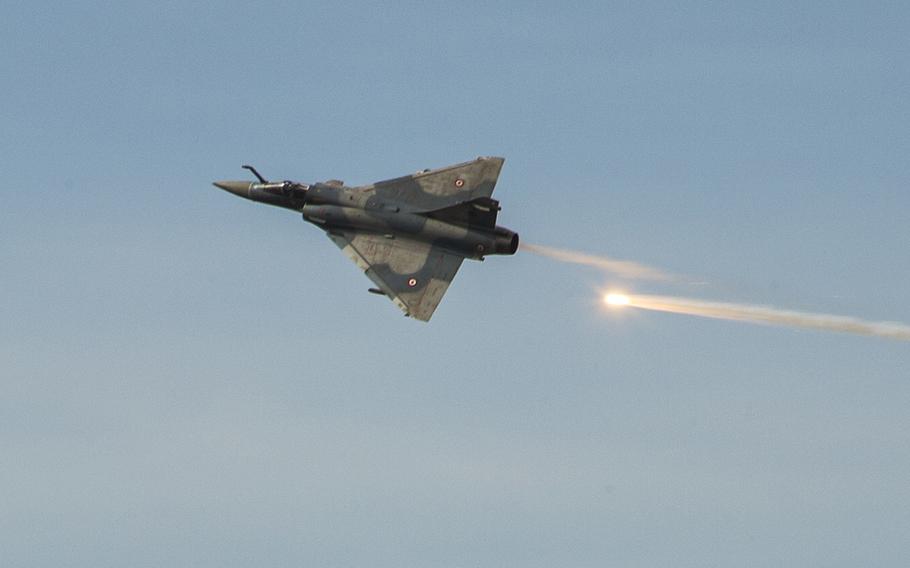 A French Mirage fighter aircraft drops flares during a French live-fire demonstration near Arta Plage, Djibouti, Jan. 14, 2017. An attack by French warplanes and commandos against a terrorist camp in a Mali killed the leader of a group that claimed responsibility for the deadly 2017 ambush on U.S. troops in Niger. (Christian Jadot/U.S. Air National Guard)

French warplanes and commandos struck a terrorist camp in Mali, killing the leader of a group that claimed responsibility for the deadly 2017 ambush on U.S. troops in Niger.

Mohamed Ag Almouner — a top leader of the Islamic State in the Greater Sahara — was found dead after an airstrike Sunday night by two Mirage jet fighters, the French army said Monday. The strike was followed by a raid by a French-led unit that seized the area. The soldiers on the scene found Ag Almouner dead along with his guard, the French military said in a statement.

Two civilians — a woman and a teenager — were also killed in the attack, the French military said. Another militant and two civilians were treated for injuries that resulted from the assault.

“The French criteria for opening fire are particularly strict and aim at avoiding civilian casualties,” the statement said.

“The proven presence of civilians near the target would have led to the cancellation of the mission. An investigation is underway to determine how civilians were hit during this strike.”

In October, four U.S. soldiers were killed while on patrol near Niger’s border with Mali, a region that is home to a mix of militant groups.

U.S. Africa Command said Tuesday that it was aware of the French mission report but could not elaborate.

“That said, I can tell that U.S. Africa Command routinely works with our French partners in the Sahel region, who provide a bulk of the force with more than 4,000 military forces,” said Maj. Karl Wiest, an AFRICOM spokesman.

“We remain committed to assisting the French-led operations to degrade violent extremist organizations and to build the defense capacity of ... Mali and its neighbors,” Wiest said.

A Pentagon investigation into the ambush that killed four soldiers found systemic failures in planning and training that put the soldiers at risk. Still, the investigation determined that the U.S. unit, along with Nigerien counterparts, fought bravely to fend off the attack, which lasted nearly six hours.

The Green Beret captain who led the troops — and came under criticism in the Pentagon probe for part of the mission planning — is being considered for the Silver Star, The New York Times reported.