Lead in water at Wiesbaden base being addressed 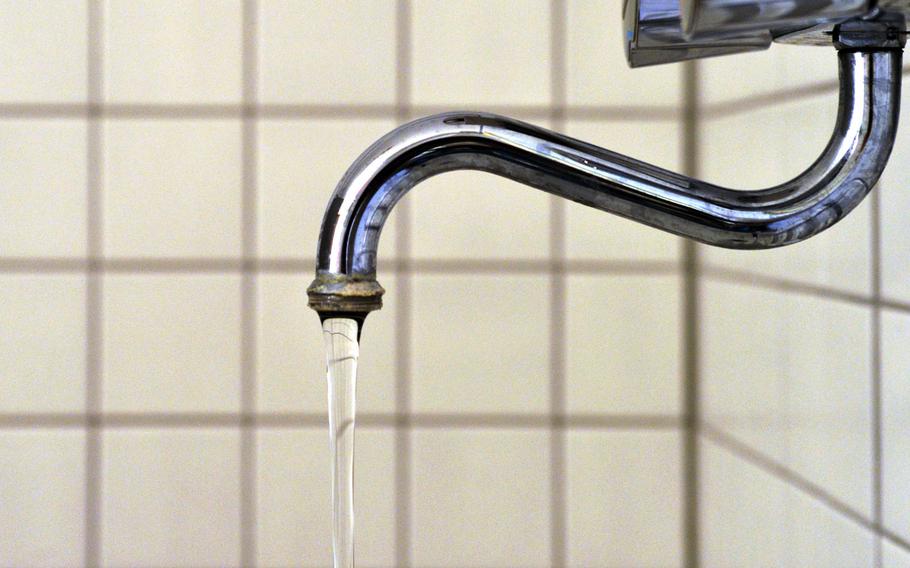 A regularly scheduled water sample conducted by Installation Management Command in Wiesbaden, Germany, showed that the water from five sinks and drinking fountains in Child, Youth and School Services buildings on Clay Kaserne contained unsafe levels of lead. IMCOM said the faucets and drinking fountains have been replaced, or are awaiting replacement, and will be retested. (Stars and Stripes)

WIESBADEN, Germany — Five faucets at youth service buildings on Clay Kaserne have been replaced or will be replaced after drinking water from them tested positive for elevated lead levels during a routine examination by Installation Management Command Europe.

IMCOM tested 15 drinking fountains and faucets at four Child, Youth and School Services buildings on Clay Kaserne and Hainerberg, drawing three samples from each. The first sample of faucets showed lead levels above 15 parts per billion — the Environmental Protection Agency’s threshold for taking corrective action — in five of the faucets, according to IMCOM. The positive results ranged from 15 parts per billion to 29 parts per billion.

Second and third draws, made 30 seconds and two minutes after the first, at those five locations showed lead levels below the 15 ppb threshold.

“All five faucets and drinking fountains with first draw samples above 15 ppb have been replaced, or are awaiting replacement, and will be re-tested,” IMCOM said in a memo on Monday. “Those pending replacement will be flushed for a minimum of 30 seconds before the first use of the day.”

The affected facilities were all on Clay Kaserne, where many buildings date from the 1950s and ’60s. According to the EPA, the most common source of lead in drinking water is from faucets and fixtures with lead solder, which is more common in older buildings.

The 45 sinks and faucets tested included every one that produces drinking water, USAG Wiesbaden said. Only faucets not used as sources of drinking water — such as those found in utility closets — were not tested.

The sites were the teen center in building 1215 and both the small and large Child Development Centers in buildings 1501 and 1502. About 550 children use these facilities daily, according to USAG Wiesbaden.

The EPA first began providing guidelines for testing lead and copper levels in water in 1991 and has revised the regulation since.

Lead in the blood can cause serious health problems, particularly in children.

“A child’s mental and physical development can be irreversibly stunted by overexposure to lead,” according to an EPA factsheet.

“This additional testing is done as part of the Army and U.S. Army Garrison Wiesbaden’s commitment to ensuring the health and safety of our children and being as protective as possible of those in our care,” the garrison said in a statement. “This specific, additional, triannual testing of facilities which house children 6 years and under is the very first step in assuring our community’s parents our water is safe.”

Other garrisons in Germany have recently reported positive tests for chemicals and contaminants, but the water supply was not affected. In June, Stars and Stripes reported that high levels of a discontinued chemical were found in groundwater near the Ansbach Military Community, though the drinking water was found to be unaffected.

Later that month, residents of the Baumholder garrison were asked to boil their water in response to a test that found the municipal water contained traces of E. coli. There, also, no contamination was found in the garrison supply, which is separate.