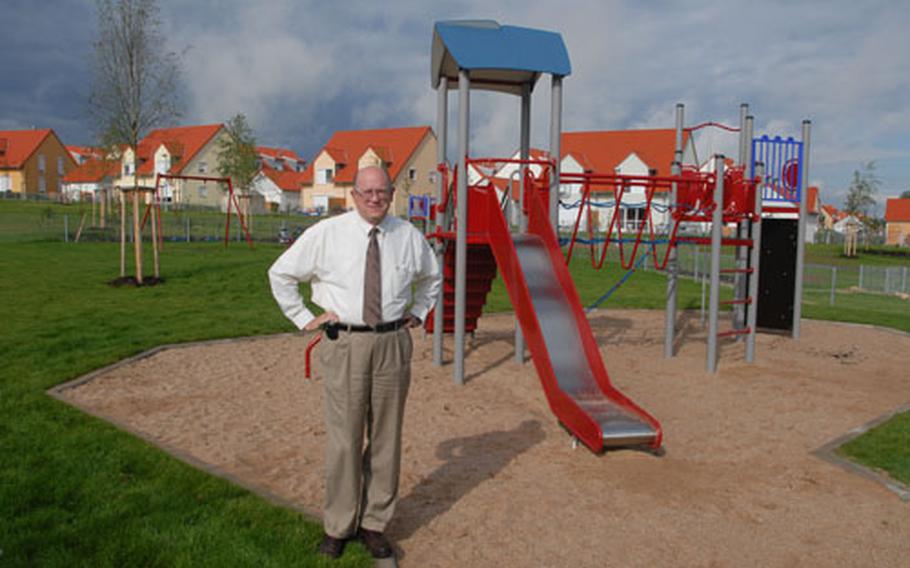 Last month Der Neue Tag, a German newspaper, published data on potentially dangerous lead levels at Netzaberg, which recently welcomed its first residents. Soil samples taken in 2004 showed concentrations of up to 6,600 milligrams of lead per kilogram (mg/kg) of soil, with most samples in excess of 3,800 mg/kg, the article said.

German regulations allow for only 200 mg/kg of lead in playgrounds, 400 mg/kg in populated areas and 1,000 mg/kg in parking lots. The U.S. Environmental Protection Agency limit for soil lead in populated areas is 300 mg/kg and University of Minnesota scientists recommend lead content for garden soil of 100 mg/kg, according to the article.

&#8220;With a lead content of 300 mg/kg the admission of a three-quarter teaspoon per week would already be enough to increase lead values in children&#8217;s blood. Even the smallest quantities in the human body&#8230; lead to chronic poisoning. Endangered particularly are children and pregnant women,&#8221; the article states.

On Friday, Tom Hays, Grafenw&#246;hr director of public works, said investigations at the site before construction started found higher lead levels in some soil. But German construction officials have assured the Army that there are no risks associated with lead at the site, he said.

&#8220;The builder knew in advance what the requirements were to mitigate the problem. Lead doesn&#8217;t produce any gasses. It is very stable and sits in the ground. So if you cover it with a house or parking lot the lead in the soil stays in place and isn&#8217;t dangerous,&#8221; he said.

Contractors are covering exposed ground at Netzaberg with a layer of topsoil. Each load of topsoil is tested to make sure it contains safe levels of lead, Hays said.

&#8220;In this case the German standards are more stringent than the American standards. We have to adhere to the most stringent standards,&#8221; he added.

Once the lead-contaminated soil is covered with top soil and grass it is not dangerous, Hays said.

The Neue Tag story also contained allegations that lead in dust churned up by on-going construction at Netzaberg might be harmful to residents.

Hays said the dust is not a health hazard and that there is not much of it in areas where people are living. Officials are looking at the potential impact of lead on plants grown in soil at Netza- berg, such as an orchard on the site of the former Netzaberg guesthouse.

However, Hays said residents are discouraged from growing vegetables in off-post housing areas. There are on-post plots set aside for people who want to grow their own vegetables, he said.

Netzaberg resident Staff Sgt. Ramon Fonfrias, who moved to the housing area last month, said he hadn&#8217;t heard about lead in the soil.

Fonfrias said he and his family feel safe in their new neighborhood.

The concerns about lead follow recent revelations that wells earmarked to provide water to Netzaberg are contaminated with radioactive substances. The Army says the water will be treated to remove the contaminants.