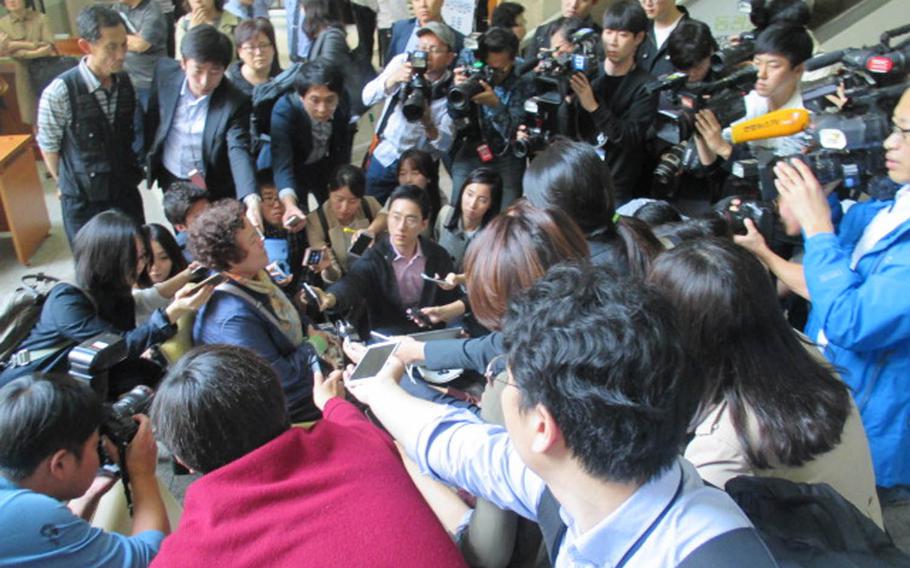 Lee Bok-su, mother of homicide victim Cho Joong-pil, told reporters after a pretrial hearing Thursay, Oct. 8, 2015, in Seoul, South Korea, that Arthur Patterson, an American accused of the 1997 stabbing death, must be punished and that she is angry at his attorneys for defending him. "I have no more tears left," she said. (Ashley Rowland/Stars and Stripes)

SEOUL, South Korea — Attorneys for an American accused of stabbing a South Korean college student to death almost two decades ago said during a hearing Thursday their client has already served time on other charges related to the case and is being unfairly tried.

Arthur Patterson, 35, was extradited to South Korea last month after years of legal maneuvering in the United States to avoid a trial for the 1997 death of Cho Joong-pil. The 22-year-old was stabbed in the neck multiple times in a Burger King bathroom near U.S. Army Garrison Yongsan.

Patterson, then a dependent of a U.S. Forces Korea civilian employee, was initially a homicide suspect but was later charged only with destruction of evidence and possession of a deadly weapon. He was found guilty and sentenced to 18 months in prison but released in 1998 as part of South Korea’s Liberation Day amnesty granted annually by the government to approximately 2,000 convicts.

Prosecutors promised to pursue harsher charges, but Patterson was mistakenly allowed to leave the country. In 2006, a Seoul court ordered the South Korean government to pay the victim’s family the equivalent of $34,000 for mistakes made while handling the case.

Patterson was not charged with murder until 2011. A second suspect, Edward Lee — a Korean-American with no links to the U.S. military — was sentenced to life in prison for the attack. His sentence was later reduced to 20 years, but after serving 18 months, Lee was acquitted for lack of evidence.

The case has attracted enormous attention in South Korea, where both Lee and Patterson are perceived as receiving lenient treatment. In 2009, the case inspired a popular movie called “The Case of Itaewon Homicide.”

Television reporters on Thursday broadcasted live outside the courthouse, and throngs of media took photos as Cho’s family entered the building for a pretrial hearing.

Inside the packed courtroom, prosecutors said only Patterson or Lee could have stabbed Cho, and evidence — including the amount and location of blood found on the two — pointed to Patterson. They also said Patterson told at least one friend he had killed someone.

Patterson attorney Oh Byoung Joo said his client is innocent and called Lee a drug user who was hallucinating when the stabbing took place. Oh also argued that Patterson should not face trial because the 15-year statute of limitations has passed.

Prosecutors, however, said Patterson had not yet been tried for murder and argued that the statute of limitations froze when he left the country.

Head judge Shim Gyu-hong, who said he wants to complete the trial within six months, told Patterson he could opt for a jury trial instead of the customary trial by a panel of judges.

Cho’s mother, Lee Bok-su, told reporters after the hearing that Patterson must be punished and that she is angry at his attorneys for defending him.

“I have no more tears left,” she said.

Patterson’s next pretrial hearing is slated for Oct. 22.