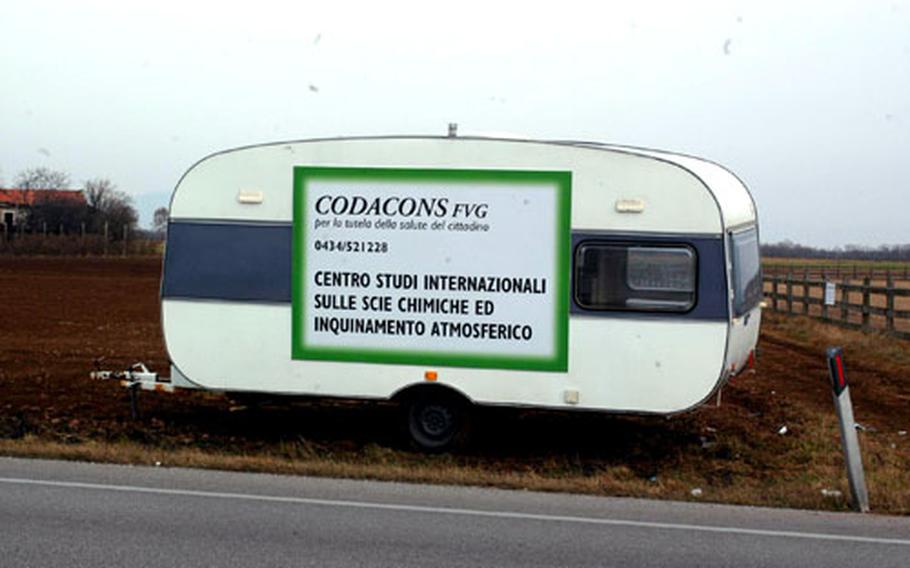 An Italian lawyer has parked a trailer right across the street from where military planes take off from Aviano Air Base, Italy. Vitto Claut says he fears planes that use the base might be causing health problems and wants to examine the fuel the planes use. (Kent Harris / S&S)

AVIANO AIR BASE, Italy &#8212; An Italian lawyer who likens his work to that of American consumer advocate Ralph Nader says he&#8217;s concerned about potential health hazards caused by fumes emitted by planes launched from the air base.

He&#8217;s even parked a trailer promoting his stance near the runway.

Vitto Claut, who runs a law office in nearby Pordenone, said he wants to obtain a liter&#8217;s worth of fuel from the planes to test it for carcinogens.

In particular, he wants to test the fuel used by what he calls the &#8220;mysterious&#8221; white aircraft on base. When asked to specify what planes he was talking about, Claut said the planes were unmarked, so he couldn&#8217;t identify them.

There are two types of aircraft at Aviano that fit that general description: the C-12 Huron and the C-21A.

The Army has recently transferred a pair of C-12s from the Dal Molin airfield in Vicenza to Aviano and the Air Force&#8217;s C-21 fleet based in Ramstein Air Base in Germany occasionally visits Aviano. Both aircraft are designed to carry small amounts of cargo and passengers &#8212; usually general officers or dignitaries.

All fuels used by aircraft at Aviano meet American and Italian standards, said 2nd Lt. Kim Schaerdel, a public affairs officer for the 31st Fighter Wing. In addition, all fuels come from an Italian supplier.

She said Claut&#8217;s request for a liter of fuel would need to be directed to the Italian base commander, Col. Roberto Sardo. Sardo could not be reached for comment this week.

Claut said he is concerned by what he believes is a high rate of cancer in the area. So he rented space on private property that&#8217;s just across the street from where aircraft take off. The area is usually off-limits to vehicles and pedestrians.

He said he would have the fuel sample tested at a local laboratory.

Claut is president of CODACONS, a consumer/environmental protection group he founded more than two decades ago. It initially had offices in Pordenone and Rome, but now has 150 locations around the country, he said. He likens aspects of his work to that of Nader&#8217;s.

Claut didn&#8217;t specify what he would do if harmful substances were found in a fuel sample, but implied that he would file a suit in a local court.