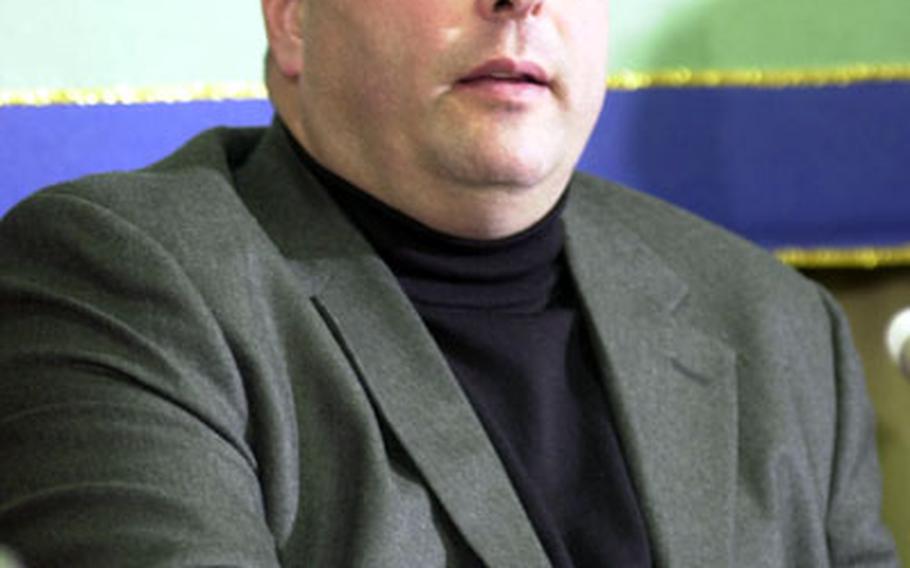 TOKYO &#8212; The attorney for Scott Waddle, former captain of a U.S. sub that struck a Japanese training vessel, blasted the military at a Monday press conference for continuing to insist Waddle not visit victims of the Ehime Maru disaster.

Earlier this week, Waddle met with some of the families of nine men and teenage boys killed when the USS Greeneville struck a fisheries school training vessel off the coast of Hawaii in February 2001.

&#8220;For the life of me, I cannot understand why the Navy did not want Scott to come meet with the families and do what is morally right and what is understood in Japanese culture to be the right thing to do,&#8221; said attorney Charles W. Gittins.

Gittins said he has received e-mail messages as recently as last week from attorneys at U.S. Forces Japan urging Waddle to not make the visit.

&#8220;The suggestion was that Scott was not protected by the status of forces agreement between the United States and Japan, and that he was just a civilian,&#8221; Gittins said. &#8220;And if he came here, he could be arrested.&#8221;

Waddle did not appear at the press conference; his attorney was joined by Peter Erlinder, a professor at William Mitchell College of Law in St. Paul, Minn., who has been a go-between between Waddle and the victims. Repeated requests by Stars and Stripes to interview Waddle have been declined.

Gittins also suggested that while Waddle has taken full responsibility for the accident, top Navy officials should share some of the blame.

&#8220;Scott has taken responsibility for every mistake that was made aboard that ship that day, and there were a number of them,&#8221; Gittins said. &#8220;But at the end of the day, it comes down to this fact: Except for several admirals wanting to have a group of individuals with no connection to the Navy go out on a distinguished visitors&#8217; cruise, the Greeneville would not have been at sea that day and the accident would not have happened.&#8221;

&#8220;In my view, the principal failure of the court of inquiry was the failure to permit us to ascertain who those people were who were on the vessel and why the secretary of the Navy had a personal interest in their being on that ship on that day.&#8221;

Shortly after the Feb. 9, 2001, accident, in which the sub rammed the training ship while demonstrating an emergency surfacing, Waddle promised the victims&#8217; families he would come to Japan and personally apologize.

Gittins said Waddle was prevented from doing so while still on active duty. Once he retired, after being found culpable in an admiral&#8217;s mast investigation, Waddle did not come in part because of financial constraints and in part because of possible litigation directed at Waddle, Gittins said.

On Nov. 14, 33 of 35 families involved in the accident accepted a $13.9 million settlement from the U.S. government. Waddle&#8217;s promise to visit apparently was the final hurdle before the other families would agree.

Gittins would not comment on meetings Waddle has had this week.

&#8220;Scott has taken the position that his meetings are private meetings between him and those families and he is not going to comment on it,&#8221; Gittins said. &#8220;For my part, however, those meetings have taken an emotional toll on Scott. It has been very difficult.&#8221;

When asked what message, in retrospect, Waddle would have for current Navy members, Gittins said it was simple.

&#8220;I think Scott&#8217;s every action following the accident was to tell the people on the ship to take responsibility for their conduct, to tell the truth and to do their duty to the best of their ability.&#8221;