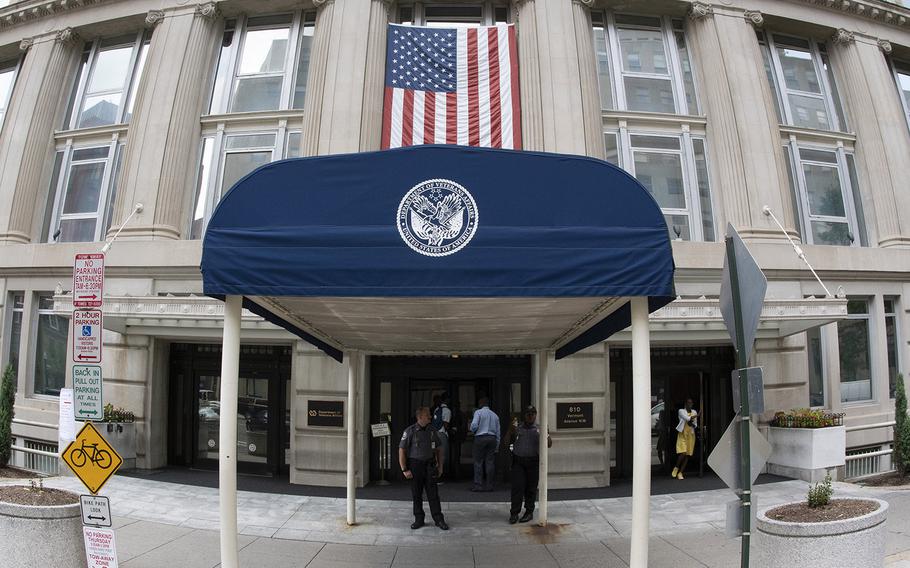 WASHINGTON — A lawsuit was filed Thursday against the Department of Veterans Affairs by two groups that allege the agency is unlawfully withholding records that could detail how extensively three members of President Donald Trump’s Palm Beach, Fla., club influenced his veterans policies.

VoteVets, a liberal advocacy group, and Democracy Forward, an activist organization that often challenges the Trump administration’s actions, filed the lawsuit in district court in Washington, D.C. The groups sent a Freedom of Information Act request to the VA in September, trying to discover the amount of influence the Mar-a-Lago members have on top-level decisions at the VA.

According to the complaint, the VA acknowledged Sept. 17 that it received the FOIA request, but the agency hasn’t produced the records or given a reason for withholding them.

A letter from Secretary Robert Wilkie, made public this week, showed he refused to hand over information to Congress about ties between Mar-a-Lago members and VA officials. In his refusal, Wilkie said it wouldn’t be appropriate to release the documents because of ongoing litigation. In an earlier lawsuit, VoteVets and Democracy Forward argued the existence of the Mar-a-Lago council broke the Federal Advisory Committee Act, which requires transparency of outside advisory groups.

“What are they trying to hide?” Will Fischer, director of government relations for VoteVets, said in a statement. “If they did nothing wrong, they wouldn’t hide behind this excuse to withhold documents from Congress, illegally. It’s time for them to come clean. If they refuse, we’ll force them.”

VoteVets and Democracy Forward had requested communications between current and former VA officials and the three men, as well as calendar entries, visitor logs, meeting minutes or any notes containing their names.

Rep. Tim Walz, D-Minn., the ranking Democrat on the House Committee on Veterans’ Affairs, asked Wilkie to share similar information with him by the end of August. He sent a renewed request Tuesday, asking for the documents by Oct. 31. He accused Wilkie of hiding behind litigation and stonewalling the American public.

Democrats, the minority party, have no power to subpoena the documents.

Rep. Elijah Cummings, D-Md., the ranking Democrat on the House Committee on Oversight and Government Reform, asked Rep. Trey Gowdy, R-S.C., the committee chairman, to subpoena the information. If Gowdy decides not to issue a subpoena, Cummings asked for the issue to be placed on the committee’s agenda so they could debate and vote on it.

As of Thursday, Republicans have not moved on the issue. The House is on break until mid-November, following midterm elections. Several Democrats in the House and Senate have asked the VA Office of Inspector General to investigate the relationship between the VA and Mar-a-Lago members for any legal or ethical violations.