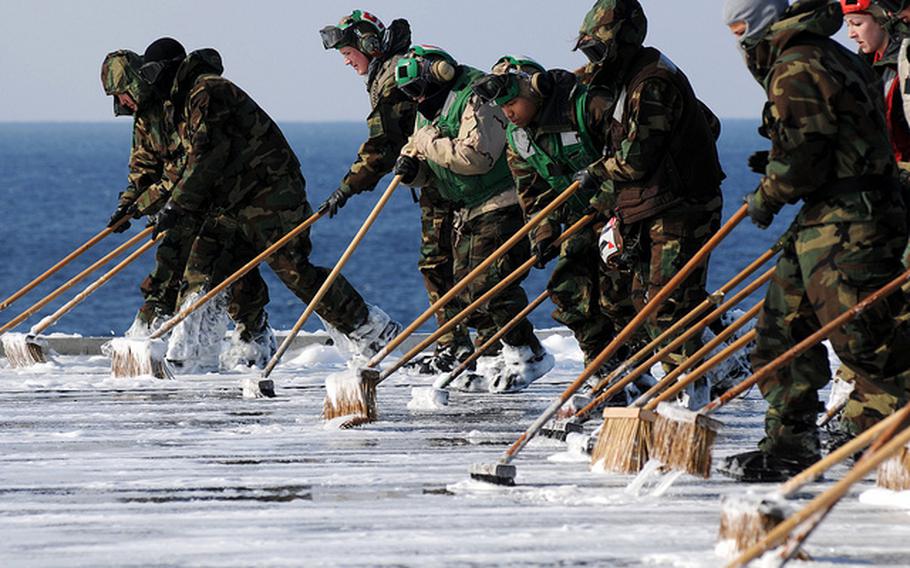 Sailors aboard the USS Ronald Reagan scrub down the flight deck in an effort to remove any potential radiation contamination during Operation Tomodachi, March 23, 2011. (Kevin Gray/U.S. Navy, Flickr)

SASEBO NAVAL BASE, Japan — A lawsuit that U.S. servicemembers have filed against Tokyo Electric Power Co. is now seeking more than $2 billion, with a growing number of plaintiffs claiming Japan’s nationalized utility lied about the dangers to those helping out after a nuclear disaster two years ago.

The number of plaintiffs has nearly tripled from nine, when the case was first filed in December, to 26, and attorneys said another 100 people are in the process of joining the suit, despite criticism from their peers that they’re just looking for an easy payoff and claims from the Department of Defense that the amounts of radiation they were exposed to don’t pose serious health risks.

Nevertheless, the plaintiffs claim they have suffered a number of ailments they say are linked to their exposure, ranging from headaches and difficulty concentrating to rectal bleeding, thyroid problems, cancer, tumors and gynecological bleeding.

The complaint was refiled Tuesday in U.S. District Court in California - one day after the two year anniversary of the massive earthquake, tsunami and nuclear disaster that devastated the eastern coast of Japan and claimed nearly 19,000 lives. TEPCO was served Thursday in Washington, D.C.

The plaintiffs include active duty and retired shore-based Marines, shore-based dependents and sailors from a number of ships that operated in the disaster area.

The amended suit still requests $40 million in compensatory and punitive damages for each plaintiff but now allows for additional damages should the jury see fit. It also requests the fund for health monitoring and medical expenses to exceed $1 billion instead of the $100 million listed in the original complaint.

“At all relevant times, the defendant knew that the reactors and storage tanks at the [Fukushima Dai-ichi nuclear power plant] were then leaking and emitting high levels of radiation,” the complaint reads.

It claims TEPCO knew the U.S. Navy would dispatch the USS Ronald Reagan and other vessels to help, relying on what the utility was saying about the risks, adding: “At all relevant times herein, the defendant failed to warn the plaintiffs, the U.S. Navy and public officials of the properties and actual levels of radiation detected at the [plant] at that time.”

The amended suit also leaves the door open for others to join the suit. It says some 70,000 servicemembers, civilian employees and family members were in the region around the time of the disaster, according to the attorney for the plaintiffs, Paul Garner.

A TEPCO spokesman said Thursday the utility was aware of news reports stating the growing number of plaintiffs but declined to comment.

“In any case, we want to appropriately handle the lawsuit in accordance to the American judicial procedures,” the spokesman said, speaking on condition of anonymity, which is standard in Japan.

The original lawsuit was filed by eight USS Ronald Reagan sailors. Within days of the disaster, the Reagan was aiding in the search for survivors and bodies just offshore from the crippled plant. They claim to have used contaminated sea water in an effort to decontaminate the Reagan and its helicopters and that their air and potable water were also contaminated.

Garner said internal TEPCO memos, experts, news articles and other documents substantiate that the utility lied, covered up the scope of the problem and distributed skewed data, coaxing the aircraft carrier and other units closer to shore and the damaged plant while offering a false sense of security.

Garner said experts are lined up to testify that the radiation that servicemembers received, even at low doses, was harmful and surpassed what “those living the same distance from Chernobyl experienced who subsequently developed cancer.”

“Their health is deteriorating,” Garner said of his clients. “[TEPCO] caused the injuries. They’re responsible for it.”

Navy officials in Japan acknowledged the Reagan passed through a plume of radiation about 100 miles northeast of the plant but said the maximum potential radiation dose was less than about one month of exposure to natural background radiation from sources such as rocks, soil and the sun.

“The U.S. Navy took proactive measures throughout and following the disaster relief efforts to control, reduce and mitigate the levels of Fukushima-related contamination on U.S. Navy ships and aircraft,” Naval Forces Japan spokesman Jon Nylander wrote Thursday to Stars and Stripes. “Ship’s company used sensitive instruments to identify areas containing radioactivity, took action to control the spread of the radioactivity and washed and cleaned areas of the ship that contained radioactivity. For perspective, the radioactivity is typically easily removed with soap and water.”

Cleanup efforts continue in the area. The utility has settled with the families of Japanese citizens who died during evacuations from the affected region but it is the first lawsuit of its kind by American servicemembers who participated in Operation Tomodachi.

Garner said research and medical testing is done to verify each plaintiff was in the region and affected by the radiation before they are allowed to join the suit.

The Defense Department stands by its claim that while some servicemembers experienced elevated levels of radiation, they weren’t high enough to make people sick. It started the Operation Tomodachi Registry so employees in Japan could look up radiation dose estimates.

Two years after the disaster, it remains incomplete; DOD spokeswoman Cynthia Smith said several reports are expected to be added to the site in the “next few months.”

Air Force Lt. Col. David Honchul, a spokesman for U.S. Forces in Japan, said it would be “inappropriate to comment on a private lawsuit between these individuals and TEPCO.”