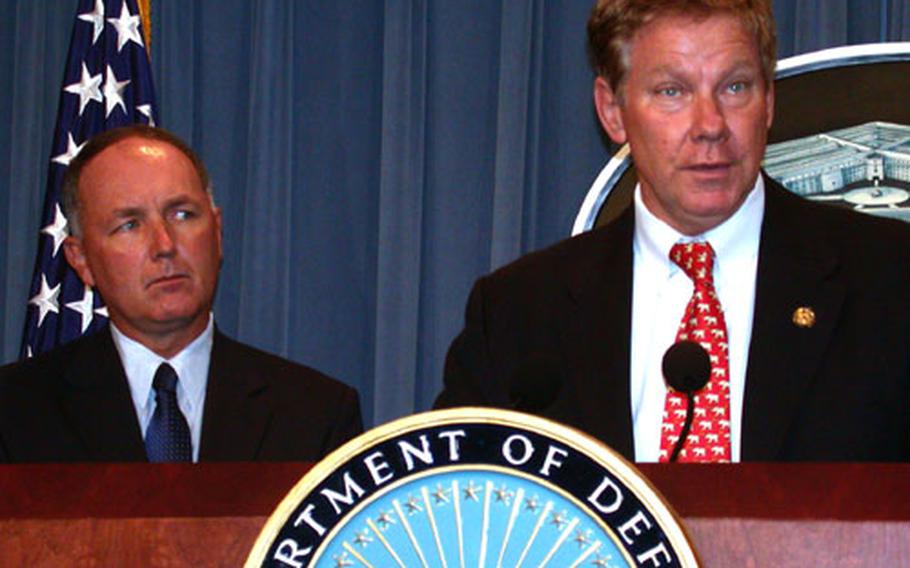 Sen. Tom Davis, R-Va., at the podium, and Rep. Pete Hoekstra, R-Mich., in August completed a three-day tour of Iraq in which they visited Baghdad, Tikrit, Kirkuk and Mosul. Seeing the mass graves, or "killing fields," as Davis called them, was the most startling part of the trip for Davis. (Sandra Jontz / S&S)

ARLINGTON, Va. &#8212; While the United States should appeal for and accept any military help offered by the United Nations to share force and a presence in Iraq, the U.S. military should not give up its operational lead in the rebuilding and security of the nation, said two congressmen following meetings Thursday with defense officials.

The topic of a resolution seeking U.N.-sanctioned military force is hot now for the Bush administration.

Rep. Pete Hoekstra, R-Mich., echoed the opinion, saying the United Nations should not have operational control.

The pair was part of a four-person, bipartisan congressional delegation which spent three days in Iraq in mid-August, visiting the cities of Baghdad, Tikrit, Kirkuk and Mosul.

The responsibility to rebuild Iraq is a worldwide one to be shared by all nations, Davis said.

And, if the Pentagon were to ask Congress for an extra $60 billion to $70 billion, an anticipated amount reported Thursday by news agencies, in a supplemental bill to fund the mounting costs surrounding operations in Iraq, Davis said he foresees fellow lawmakers passing such a bill.

On the House side, Hoekstra said a Defense Department request for more money likely would be approved, after careful review by lawmakers, in order to let the U.S. military and government continue with efforts to rebuild the nation.