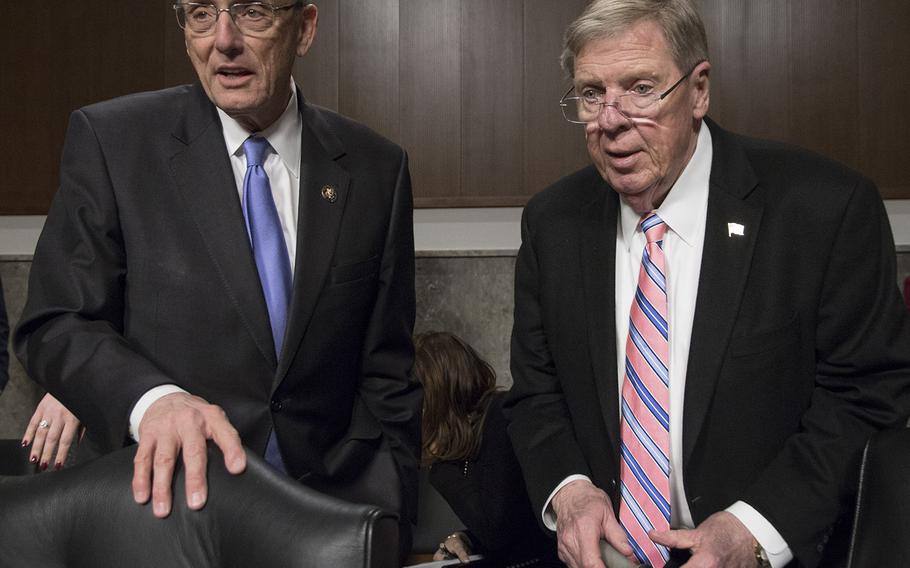 WASHINGTON — Lawmakers are trying again to broker a deal on reforms for the Department of Veterans Affairs that would overhaul the agency’s community care programs, relaxing rules for when veterans are eligible to go to private doctors for medical care.

Rep. Phil Roe, R-Tenn., the chairman of the House Committee on Veterans’ Affairs, introduced legislation Thursday that’s similar to a deal that failed in March to be included in a massive spending bill that Congress passed to avoid a government shutdown.

In addition to altering how the VA uses private-sector care, Roe’s bill – titled the VA Mission Act – would provide $5.2 billion for the VA Choice program. It would also expand benefits for veteran caregivers and initiate a system-wide review of VA infrastructure, among other measures.

“This legislation must be passed, and if Congress fails to act, veterans will pay for that failure,” Roe wrote in a prepared statement. “The VA Mission Act is appropriately named, as it will put the department back on track to fulfilling President [Abraham] Lincoln’s promise to care for the men and women who have borne the battle.”

It’s uncertain whether House Democrats will be in favor of it. In March, Democrats on the House VA committee opposed the deal reached between other lawmakers. They argued it was too rushed, and they cited policy concerns.

As of Thursday morning, Rep. Tim Walz, D-Minn., the committee’s ranking Democrat, was seeking feedback from outside stakeholders on the VA Mission Act and had not yet taken a position on it.

The committee will meet Tuesday to discuss the bill and determine whether to advance it to the House floor.

Changing rules for care Congress, along with the VA, White House and veterans organizations, has spent more than a year negotiating changes to the VA’s private-sector care programs.

The debate has been long and contentious, and former VA Secretary David Shulkin blamed it for his ouster in March. The day following his dismissal, Shulkin said some political appointees at the VA viewed him as an “obstacle to privatization.”

Lawmakers and veterans advocates agree VA community care programs need to be fixed, but there’s disagreement over how aggressively veterans’ care should be pushed into the private sector. Many veterans organizations believe offering “unfettered choice” to veterans would erode VA resources and eventually dismantle the agency.

As of now, the VA Choice program allows veterans to receive appointments in the private sector if they have to wait longer than 30 days for an appointment at the VA or live more than 40 miles driving distance from a VA facility. Congress agrees those rules are rigid and bureaucratic.

Roe’s bill would require the VA to grant veterans access to the private sector if they and their VA doctor agree it’s in their best interest. A host of issues could be taken into account when making that decision, including whether the veteran faces an “unusual or excessive burden” to accessing a VA facility.

The bill also introduces the possibility of veterans receiving access to the private sector if their closest VA is determined “deficient” compared to other VA and non-VA facilities.

If a veteran’s request for private-sector care is rejected, they could appeal it through the VA’s clinical appeal process, the bill states.

After its introduction Thursday, the bill received quick praise from the conservative advocacy group Concerned Veterans for America, as well as one traditional veterans service organization, the Veterans of Foreign Wars.

“VFW members around the country have made it clear that the VA health care system must be improved, not dismantled,” said VFW National Commander Keith Harman. “This agreement strikes a balance between improving access to VA doctors and leveraging the capabilities of the private sector when VA is unable to meet veterans’ health care needs.”

Funding and ending VA Choice The legislation includes an end-date for the current iteration of the VA Choice program, which was created in response to the 2014 wait-time scandal. If the bill is passed, the program would expire one year after it’s signed into law.

The $5.2 billion included for the program in the VA Mission Act is intended to last the program through the next year.

The Choice account has come close to bankruptcy multiple times in the past two years, and each time Congress has passed emergency funding measures within days of the program running out of money.

It’s expected to be depleted again by the first week of June unless Congress acts.

VA Secretary Robert Wilkie has called on Congress multiple times during the past two weeks to pass legislation by Memorial Day, which is May 28.

Other changes Besides revamping private-sector cares programs, the VA Mission Act contains a gradual expansion of caregiver benefits to veterans injured before the 9/11 terrorist attacks.

Through a VA caregiver program implemented in 2010, benefits such as monthly stipends, health insurance, medical training and access to home health aides are available to family caregivers of post-9/11 veterans.

Caregivers to veterans injured before 9/11 see it as an unfair discrepancy, and along with veterans organizations, they’ve been fighting for a change for years.

A process to take stock of VA infrastructure problems is also included in the VA Mission Act.

The bill would create a commission tasked with reviewing VA buildings nationwide and recommending which to get rid of and where the VA could invest.

Getting rid of old and underused facilities was one of Shulkin’s priorities for the department. Under his watch, the VA began the process last year of disposing of or finding another use for 430 vacant or nearly vacant buildings. The VA was also reviewing another 784 buildings that are still in use.

If the measure is approved, the asset-review commission would conduct its work in 2022 and 2023.

There are a list of other provisions in the bill, including one to provide scholarships to medical students in return for 18 months of work at a VA facility. Another would require the VA to post publicly a list of job vacancies.

The nonpartisan Congressional Budget Office has not yet offered a cost estimate for the VA Mission Act.

Roe’s office said costs for the main portions of the bill – the community care reforms, expansion of caregiver benefits and asset review – are expected to be completely offset.

To offset those costs, the bill would extend pension reductions for Medicaid-eligible veterans in nursing facilities and continue fees on VA-guaranteed home loans. The cuts were put in place in 2014 when the Choice program was first created. They were set to last until Sept. 30, 2024. The bill would move the end-date through Sept. 30, 2028.