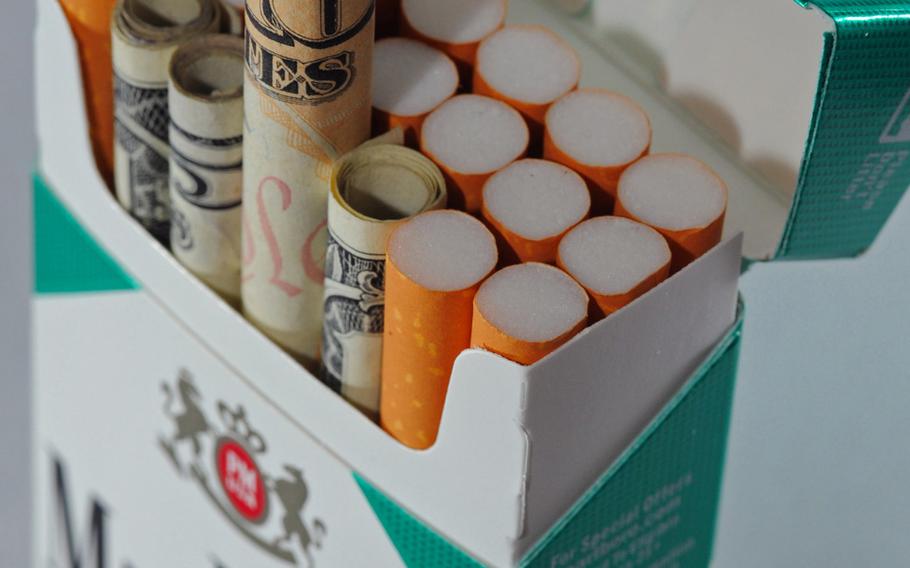 According to data available in April 2010, Americans spend each year more than $50 billion on cigarettes, essentially smoking their money away. Roughly 30% of military active duty personnel smoke, and the Department of Defense health care system spends roughly $930 million dollars on smoking-related illnesses. This photo won honorable mention as an illustrative in the 2011 Military Photographer of the Year competition. (Jodi Martinez/US Air Force/MCT)

WASHINGTON — Lawmakers are pushing back against a Navy review to potentially ban the sale of tobacco products on Navy and Marine Corps facilities, saying it violates servicemembers’ “rights.”

Last month, Cmdr. Tamara Lawrence, a Navy spokeswoman for the secretary, confirmed Secretary of the Navy Ray Mabus is taking a new look at tobacco use across the service. A Navy official, who spoke to Stars and Stripes on condition of anonymity because he was not authorized to speak on the topic, said one option on the table is banning tobacco sales on Navy bases and ships.

“Instead of making unilateral decisions that encroach on the rights and personal freedoms of our servicemen and women, Secretary Mabus should focus resources on preserving the readiness of our Navy and maintaining our national security. I will continue to fight to protect the rights of our American patriots who dedicate their lives to defending our freedom, securing our homeland, and protecting our democracy,” said Rep. Richard Hudson, R-N.C., a member of the House Agricultural Committee from one of the leading tobacco-producing states, in a press release Friday.

“The fact that a ban on sales of a legal product is even being considered is absurd and just another example of this Administration’s desire to regulate every part of our lives,” Hudson said.

On Thursday, Hudson and 17 other members of Congress sent a letter to Mabus urging him to abandon the review. They said that further efforts to curb tobacco use by troops aren’t important enough to justify the cost and effort.

“Given the current fiscal climate, the strain on the Navy to conduct global operations, and the impending reduction to the size of the fleet and the number of sailors and Marines, we find it difficult to justify the continued focus on an issue that impacts a continually shrinking segment of the service,” they said. “As we struggle to meet global challenges, we fail to see why new resources should be spent on paying for nicotine replacement therapy products instead of addressing the readiness, operations, and maintenance that have been deferred and directly impact the Navy’s ability to carry out their mission.”

The lawmakers accused Mabus and the Navy of “demonizing” servicemembers who smoke.

Hudson joined Rep. Duncan Hunter, R-Calif., and Rep. Tom Rooney, R-Fla., in submitting an appropriations request to bar funding for the review or other efforts to ban tobacco sales or use in the military.

Other lawmakers support the Navy initiative.

“We applaud your ongoing efforts to help our sailors and Marines break nicotine addiction and avoid the lifelong health complications and deaths associated with tobacco use. We urge you to do everything in your capacity to address this issue for our military men and women, including moving forward with the proposal to stop the sale of tobacco aboard all naval bases and ships,” Sens. Richard Blumenthal, D-Conn., Richard Durbin, D-Ill., Tom Harkin, D-Iowa, Jack Reed, D-R.I., and Sherrod Brown, D-Ohio, wrote in a March 28 letter to Mabus.

On Monday, Secretary of Defense Chuck Hagel suggested he would favor a ban on tobacco at all military installations.

“I don’t know if there’s anybody in America who still thinks that tobacco is good for you,” Hagel told reporters at the Pentagon in response to a question about the Navy review. “We don’t allow smoking in any of our government buildings. Restaurants, states, [and] municipalities have pretty clear regulations on this. I think in reviewing any options that we have as to whether we in the military through commissaries [or] PXs sell or continue to sell tobacco is something we need to look at. And we are looking at it. And I think we owe it to our people,” he told reporters at the Pentagon.

Hagel noted said dealing with tobacco-related health issues costs the Defense Department more than a billion dollars a year, and said the human costs of smoking must be considered.

“Now the dollars are one thing. But the health of your people — I don’t know if you put a price tag on that. So I think it does need to be looked at and reviewed,” Hagel said.

The following lawmakers signed the letter to Mabus: