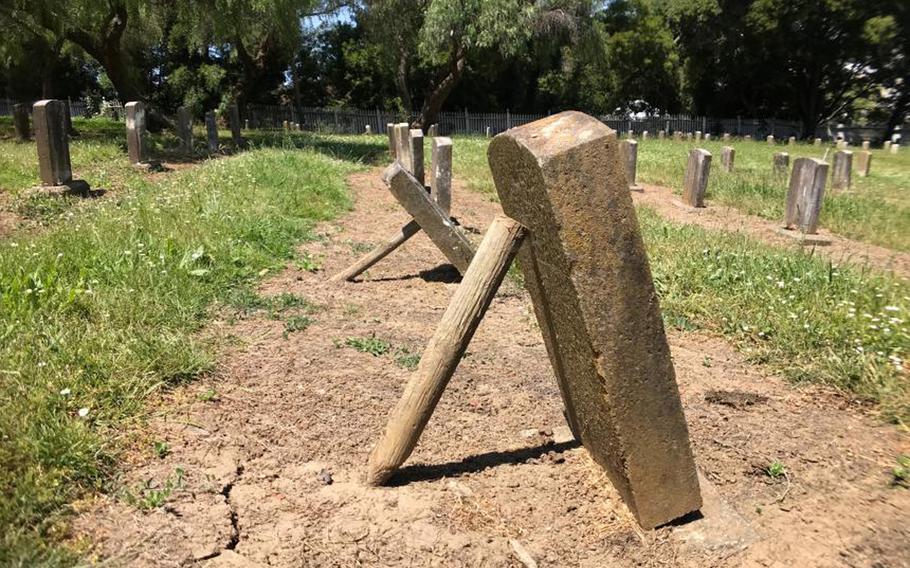 The Navy transferred the Mare Island Naval Shipyard — including the cemetery — to the city of Vallejo after the shipyard closed in 1996. While volunteers have labored to maintain the site, it has fallen into disrepair in the intervening decades. (Courtesy of Sen. Bill Dodd)

WASHINGTON — Lawmakers are renewing their plans to move upkeep for the oldest military cemetery on the West Coast, which has long been neglected, under the care of the Department of Veterans Affairs.

Sen. Dianne Feinstein, D-Calif., and Rep. Mike Thompson, D-Calif., filed legislation in their respective chambers to restore Mare Island Naval Cemetery, a San Francisco Bay-area site where 860 servicemembers and veterans — mostly from the Navy and the Marine Corps — were buried between 1858 and 1921.

The cemetery, which includes the graves of three Medal of Honor recipients and veterans from the War of 1812, the Civil War and World War I, has since been under the care of the City of Vallejo, Calif., which hasn’t had the funds to keep up the grounds.

“I think we have a pretty good chance of getting it done this time,” said retired Navy Capt. Ralph Parrott, 77, of Fairfax, Va., who has led a coalition of veterans and volunteers across the country pushing for the move since 2017. “Our little band of merry, old men are trying to focus our efforts … We are going to be walking the halls of Congress to get as many senators and (other) members of Congress to sponsor the bill.”

The cemetery has fallen into dilapidation after its neighboring shipyard was closed through the Base Realignment and Closure Act in 1996.

Today, it’s littered with dead leaves and bark, invasive roots, and neglected pepper and eucalyptus trees. Some of the cemetery’s falling headstones from the 19th century are held up by logs.

Several groups have expressed support for the legislation, including the American Legion, the Veterans of Foreign Wars, the Fleet Reserve Association, the Vietnam Veterans of America, AMVETS, Disabled American Veterans, the Wounded Warrior Project and the U.S. Navy League.

Last year, Feinstein sponsored legislation modeled after a House version by Thompson that would transfer control of the cemetery from Vallejo to the VA’s National Cemetery Administration, or NCA.

“In its current state, the Mare Island Naval Cemetery is no longer a fitting tribute to the 860 veterans and their families that are buried there,” Feinstein said Tuesday in statement. “This was originally a naval cemetery so it makes sense to transfer control back to the federal government to ensure its properly repaired and maintained. We need to restore this historic cemetery, not just to honor the veterans buried there, but to show all veterans that their sacrifices will never be forgotten.”

Thompson has about 35 Democratic and Republican co-sponsors for his bill, H.R. 578.

“The Mare Island Cemetery is an historic monument to the sacrifice of the hundreds of fallen American heroes buried there,” Thompson said Tuesday in a statement. “As their final resting place, it is a sanctuary for our veterans and must be restored to its full beauty and potential.”

But even as the plan gains supporters, it wasn’t immediately clear where the VA might stand on the move this year. Last year, the agency voiced opposition against the proposal, testifying that there were alternatives to having the VA care for the cemetery.

The VA could not be reached for comment late Wednesday.

“The transfer of the Mare Island Naval Cemetery to VA could disrupt efforts currently underway to address the condition of the cemetery, and because acquisition of the cemetery by VA does not align with VA’s current strategic objectives with respect to providing burial access to veterans and their families,” Paul Lawrence, the VA’s undersecretary for benefits, said in submitted testimony last year. The move “sets an unwanted precedent regarding veteran cemeteries in disrepair managed by localities, allowing them to eschew their responsibility to our nation’s heroes.”