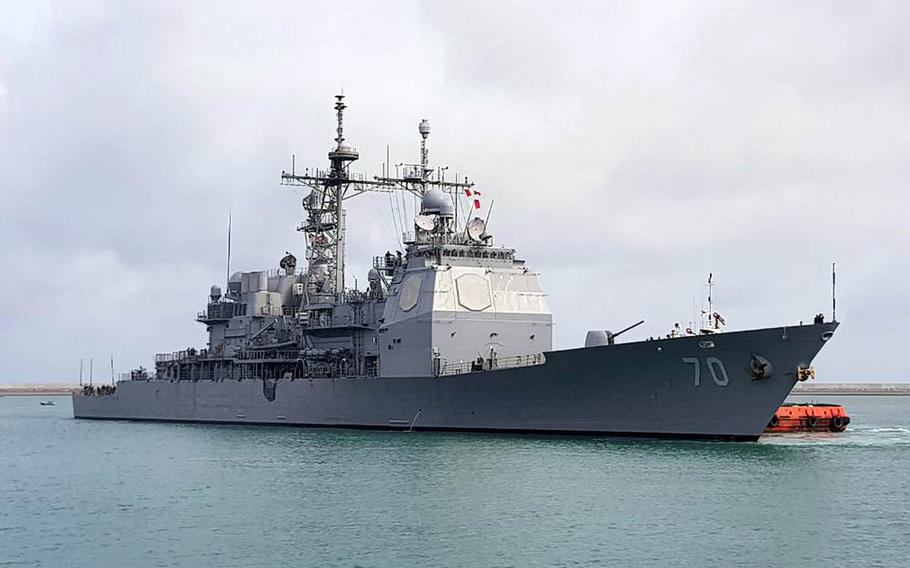 The guided-missile cruiser USS Lake Erie arrives in Colombo, Sri Lanka, June 11, 2017, to provide assistance in the wake of severe flooding and landslides that devastated many regions of the country. (Joshua Fulton/U.S. Navy)

While the Trump administration has yet to define its strategic policy in the Pacific, key lawmakers are urging the Pentagon to expand Obama-era security assistance to countries in the Bay of Bengal to counter China’s growing influence.

The inclusion underscores the emerging alliance among the United States, India and other Bay of Bengal states as a counterbalance to China’s military and economic ventures in the region.

The waters are central to China’s One Belt One Road project, a massive global infrastructure plan intended to secure trade routes essential to China.

Earlier this year, China released a proposal to build a first-of-its-kind ocean corridor intended to link Southeast Asia with the Bay of Bengal, among other places.

The 2017 NDAA gave the defense secretary permanent, worldwide authority to provide foreign countries with support for training, equipment and sustainment to build capacity for, among other things, maritime and border-security operations.

The first iteration of aid was last year’s Southeast Asia Maritime Security Initiative, which provided assistance to key nations bordering the disputed South China Sea – Indonesia, Philippines, Malaysia, Thailand and Vietnam – over which China has laid claim to a vast swathe. The initiative has funded equipment, training and military construction.

The initiative expansion, proposed by the Senate Armed Services Committee, would build upon a blossoming military relationship between America and Bangladesh.

Meanwhile, Sri Lanka to the south is a focal point for China’s One Belt One Road, but the U.S. military has been stepping up its ties with the tiny nation that lies near a crucial trade route between the straits of Malacca and Hormuz.

Speaking at a maritime security conference in Sri Lanka in November, Harris said, “As the first American four-star officer to visit Sri Lanka in almost a decade, I’m pleased to see the strengthening of security ties between our countries.”