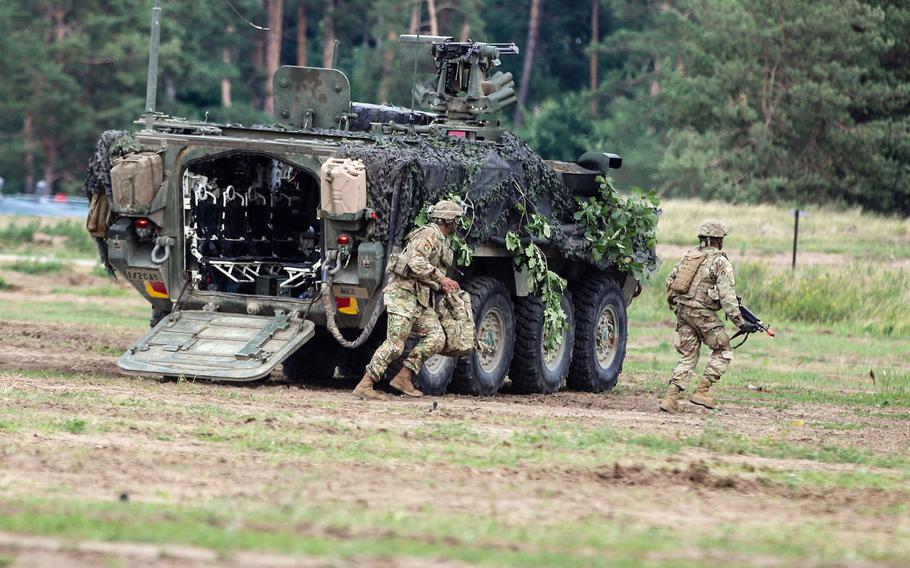 The Pentagon would have to consider increasing combat power in Europe and look at the feasibility of permanently stationing an Army brigade in Poland under a deal reached by House and Senate lawmakers.

A House and Senate panel agreed on Monday to a reconciled version of the National Defense Authorization Act, which could come up for a vote in the House as early as this week. Overall, the bill calls for troop increases and acquisition of a wide range of new aircraft, ships, submarines and weapons. Lawmakers also want the Pentagon to review how it conducts advisory missions in places like Niger, where four U.S. soldiers were killed in October in an ambush.

For Europe, the NDAA spells out steps to counter and “if necessary, defeat Russian aggression.”

The bill would mandate that President Donald Trump designate an official in the National Security Council to develop and oversee a strategy for fighting Russian “malign influence.”

The bill would require Mattis to examine the merits of putting an Army brigade combat team and combat enablers in Poland on a permanent basis.

Within military circles, the idea of garrisoning U.S. troops in Poland is controversial. Warsaw is pushing hard for a larger and permanent U.S. presence and has offered up to $2 billion to help offset the costs.

Already, the U.S. has rotational forces operating daily in Poland, including a battle group not far from the country’s border with the Russian military enclave of Kaliningrad. In addition, an armored brigade and an Air Force detachment are all on year-round rotations in the country.

Still, supporters of a permanent presence argue that basing troops in Poland would send a stronger deterrent signal to Russia. Opponents, however, worry that such a presence would cause divisions within NATO at a time when the alliance is already under political strain.

Moscow has described the deployments and repeated military exercises near the enclave as provocative.

Trump rattled member states earlier this month during a contentious NATO summit in Brussels, where he warned allies that the U.S. would go it alone if they didn’t increase defense expenditures. Also causing concern was his subsequent meeting with Russian President Vladimir Putin and public statements that called into question his commitment to defending smaller NATO member Montenegro.

“The array of national security threats facing the United States is more complex and diverse than at any time since World War II,” the NDAA says. “The strategic environment has not been this competitive since the Cold War. Simply put, America no longer enjoys the competitive edge it once had over its competitors and adversaries.”

Other Europe-focused provisions in the NDAA call for adding $205 million to procure 61 Bradley Fighting Vehicles for the European Deterrence Initiative, which funds operations along NATO’s eastern flank.

The bill also authorizes $250 million to provide security assistance to Ukraine, $50 million of which would be set aside for defensive “lethal assistance.”

Meanwhile, the bill means military operations in parts of Africa as well as other places such as Yemen could get a closer look as the Pentagon is required to examine the underlying legal rationale behind “advise, assist, and accompany missions by U.S. military personnel outside of Iraq, Syria, and Afghanistan.”

While U.S. troops have been operating in Niger and Somalia for years, the number of Americans in those countries has steadily increased without significant public debate over the scope and merits of the missions. But the attack on U.S. soldiers in the Nigerien village of Tongo Tongo, brought into focus the risk U.S. forces face in isolated parts of Africa.