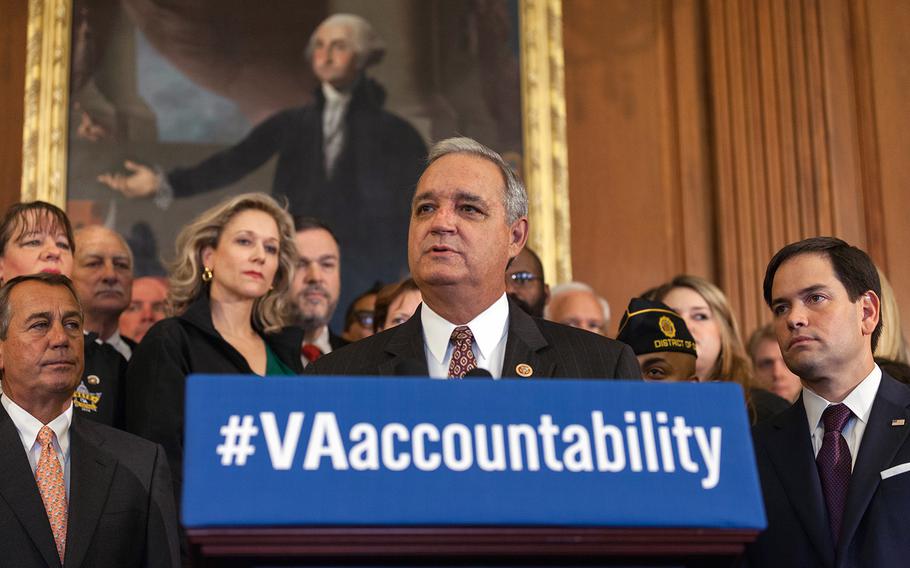 Rep. Jeff Miller, Chairman of the House Veterans Affairs Committee, holds a sign on April 3, 2014, stressing the need for more accountability at the VA. At a committee hearing on Wednesday, Jan. 28, 2015, an official with the Congressional Budget Office accused the VA of withholding information crucial to overseeing the VA’s ailing health care system. (Caleb Smith/U.S. Congress)

Members of a House subcommittee lashed out at the Department of Veterans Affairs on Wednesday for withholding information they and budget researchers say is crucial to overseeing the VA’s ailing health care system and said they are considering legislation that will force department to release data.

At a hearing to discuss the cost and quality of VA health care, an official with the Congressional Budget Office, which provides independent analysis for Congress, said the VA refused to provide his office basic information about their health care for a report released in December comparing the VA medical system to the private sector.

“Additional data, particularly if it was provided on a regular and systematic basis, could help inform policymakers about the efficiency and cost-effectiveness of VHA’s services,” said Matthew Goldberg, the Congressional Budget Office deputy assistant director for national security.

The hearing of the House Committee on Veterans Affairs Subcommittee on Health was held to discuss the cost and quality of VA care in comparison to the private sector, but much of it focused on the lack of data from the VA that Goldberg said made an already difficult comparison impossible. The report was commissioned in part to give lawmakers and VA officials a better idea of how to reform the VA in the wake of a national veterans’ health care scandal.

Similar reports are done on Tricare, the Department of Defense’s health care program, but Goldberg said VA would not release similar patient and care information that the DOD provides, even with sensitive patient data redacted.

Goldberg’s statement prompted some congressmen to question the VA’s commitment to reform, and floated the idea of legislation forcing the department to release certain data.

“Unfortunately, it became painfully apparent to me last year that the Veterans Health Administration, which operates the VA health care system, was either unable or unwilling to provide basic information about the services it provides,” said Rep. Dan Benishek, R-Mich. “VA’s lack of transparency is echoed in the disappointing testimony — absent substance or detail — that VA provided for this morning’s hearing.”

Dr. James Tuchschmidt, the VA’s acting deputy undersecretary for health, said he would work with Congress on releasing additional data, though he did not specify what the VA would release.

“You have my commitment today to sit down with my staff and figure out what kind of data you need,” he said.

The department has been under fire since revelations last summer that some VA medical centers had created secret patient wait-lists to make it appear veterans were getting care faster than they were. The scandal cost former VA Secretary Eric Shinseki his job and his replacement, Bob McDonald, who promised top-to-bottom reform at the department, has been getting increasing criticism from lawmakers.

“The new secretary is not changing the culture as far as I can see,” Rep. Mike Coffman, R-Colo., said at the hearing.

In response to Stars and Stripes’ questions, VA officials would not say why the department withheld the data nor whether it plans to release the information to Congress and the budget office in the future.

“An open and honest working relationship with our Committee partners is vital for the improvement of VA care and services for our veterans,” VA spokeswoman Walinda West said. “We welcome constructive criticism and continually seek opportunities to directly discuss positive ways to improve our systems and organization.”