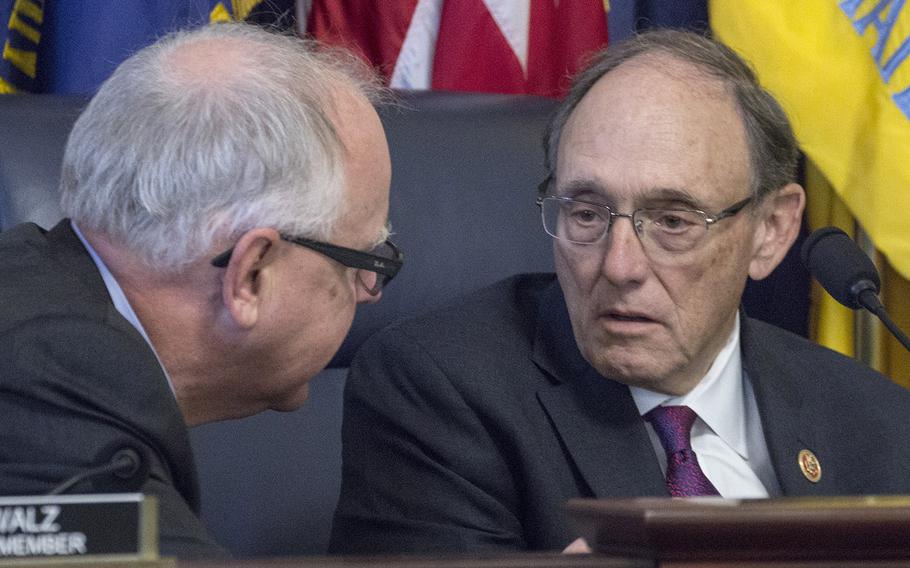 WASHINGTON – Lawmakers are resuming an effort that stalled in November to extend health benefits to about 90,000 sailors who served in Vietnam and were potentially exposed to Agent Orange.

Rep. Phil Roe, R-Tenn., chairman of the House Committee on Veterans’ Affairs, introduced a reworked bill Friday that now includes a method to pay for extending Agent Orange benefits to Vietnam War veterans who were located on ships off the Vietnamese coast, known as “Blue Water” sailors.

Republicans and Democrats on the committee wrangled five months ago over the cost of extending the benefits to these sailors, though they all are seemingly supportive of the measure now.

“Today is a great day for Blue Water Navy veterans,” Roe wrote in a prepared statement. “We owe it to the brave veterans who served in the Vietnam War to provide benefits for conditions they may have developed because of exposure to Agent Orange.”

The Department of Veterans Affairs already presumes ground troops who served in Vietnam and others who served in the country’s inland waterways were exposed to Agent Orange, a dioxin-laden herbicide that’s been found to cause respiratory cancers, Parkinson’s disease, heart disease as well as other conditions.

Blue Water veterans have been denied the same benefits. The VA has argued there is not enough evidence to link Agent Orange to sailors aboard aircraft carriers, destroyers, cruisers and others ships.

In Congress, the fight stalled on multiple occasions because lawmakers have disagreed on how to pay for it.

The fee rates have not increased since 2004, Roe’s office said. Under law, fees are waived for veterans who have a disability connected to their military service. That would still be the case.

Members of the National Guard and Reserve incur slightly higher fees through the home loan program. Roe’s proposal would bring their fee rates in line with other servicemembers and veterans.

John Wells, an attorney and director of the group Military-Veterans Advocacy, has been fighting on behalf of Blue Water veterans since 2008. A bill to extend benefits to those veterans has never made it past committee, he said.

The bill now appears positioned to overcome that hurdle.

In November, Roe proposed paying for the Agent Orange benefits with a “round down” that would round the cost-of-living adjustment on veterans’ disability checks to the nearest dollar amount.

Rep. Tim Walz, D-Minn., the ranking Democrat on the House VA committee, argued at the time that the cost should not be offset by taking from other veterans. He and Roe agreed to work with veterans service organizations and find another way to pay for it.

Walz said Friday that he would support the reworked legislation.

“This legislation is yet another example of the good we can accomplish when we work together on a bipartisan basis with veterans service organizations and reach across the aisle,” Walz wrote in a prepared statement. “I am proud we will finally be able fix this broken promise to our nation’s veterans.”

The House Committee on Veterans’ Affairs will meet Tuesday and decide whether to send the bill to the full House.