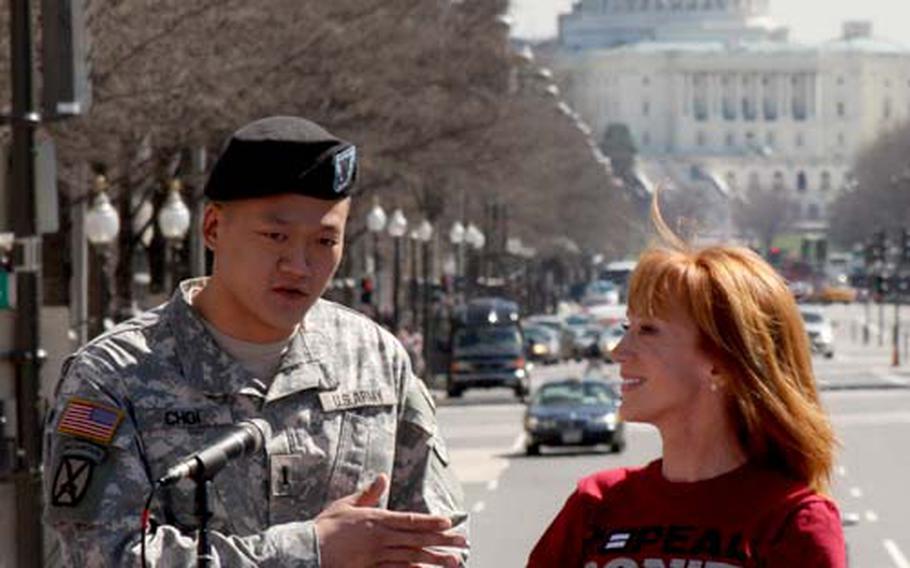 A protestor cheers on calls for a repeal of the military’s “don’t ask, don’t tell” law . (Leo Shane III / S&S)

WASHINGTON &#8212; Veterans discharged under the &#8220;don&#8217;t ask, don&#8217;t tell&#8221; law urged Congress on Thursday to move quickly to repeal the ban, but supporters warned that lawmakers are already endangering military readiness with the recent push to dump the law.

The Defense Department is less than two months into a yearlong review of the law, which since 1993 has banned openly gay servicemembers. But Democrats in both the House and Senate have already introduced legislation to repeal the law, and could attempt to pass those measures in some form by the fall.

At least one aspect of the debate will be delayed a bit longer: Defense Secretary Robert Gates in February had promised a 45-day review of legal issues surrounding the current law, looking at a &#8220;more humane&#8221; application of the ban for troops outed against their will.

The 45-day period ends Friday, but Pentagon spokesman Geoff Morrell said Gates won&#8217;t have an announcement on those issues until next week at the earliest because he &#8220;still needs to work through a couple of final issues with the chiefs and other senior DOD officials.&#8221;

Both Gates and Joint Chiefs Chairman Adm. Mike Mullen have testified that they support overturning the &#8220;don&#8217;t ask, don&#8217;t tell&#8221; law, but doing so in a careful, measured way. On Thursday, retired Marine Gen. John Sheehan, former head of U.S. Atlantic Command, told lawmakers he supports the yearlong review but believes researchers will conclude that such a change is detrimental to unit cohesion and morale.

&#8220;Military life is fundamentally different than civilian life,&#8221; he said. &#8220;Popular culture may have changed over the years, but military culture and responsibilities have changed very little.&#8221;

Sheehan said known homosexuals in units he commanded caused disruption for all his Marines, forcing troops to choose sides and creating fear among those who had to work closely with them.

But former sailor Jenny Kopfstein, discharged under the law in 2002, said none of her colleagues were upset when she revealed her sexual orientation, and that many embraced her more closely because of her openness and honesty.

On Wednesday, the Vet Voice Foundation &#8212; a self-described non-partisan group whose leadership includes members from VoteVets.org &#8212; released a new survey suggesting that most servicemembers would accept openly gay troops in the ranks.

The poll, which interviewed 510 Iraq or Afghanistan veterans last month, found that more than 70 percent of those surveyed support a repeal of &#8220;don&#8217;t ask, don&#8217;t tell,&#8221; and that just as many would be comfortable serving alongside an openly gay servicemember.

But supporters of the law said those numbers don&#8217;t address how troops would react if they were forced to share sleeping quarters or showers with openly gay troops. They also point to a 2008 Military Times poll &#8212; a survey of subscribers that gay rights groups have decried as unscientific &#8212; which found that 10 percent of respondents may not re-enlist if the law is overturned.

On Thursday, Sen. John McCain, R-Ariz., implored his colleagues to slow efforts to repeal the law until the Defense Department finishes a comprehensive review of the issues, noting that officials do not know exactly how such a change will impact recruiting and readiness.

&#8220;The law is not perfect, but a compromise that helps maintain military readiness,&#8221; he said. &#8220;We should not change the law until we are sure that such a change is consistent with military effectiveness.&#8221;

But witnesses and Democrats at the hearing called the &#8220;don&#8217;t ask, don&#8217;t tell&#8221; policy contrary to the military values of honesty and integrity, forcing gay servicemembers to lie about their personal lives in order to stay in the ranks.

Michael Almy, a former Air Force major, testified that he served for 13 years including a deployment in Iraq without revealing his homosexuality. When a colleague read his personal e-mails and outed him to commanding officers, he said his dismissal was more disruptive to the 200 airmen under his command than the revelation about his personal life.