Rep. Mike Bost, R-Ill., chairman of the Veterans' Affairs' subcommittee on Disability Assistance and Memorial Affairs, listens to testimony during a hearing on Capitol Hill, Sept. 13, 2017. (Joe Gromelski/Stars and Stripes)

Rep. Mike Bost, R-Ill., chairman of the Veterans' Affairs' subcommittee on Disability Assistance and Memorial Affairs, listens to testimony during a hearing on Capitol Hill, Sept. 13, 2017. (Joe Gromelski/Stars and Stripes) 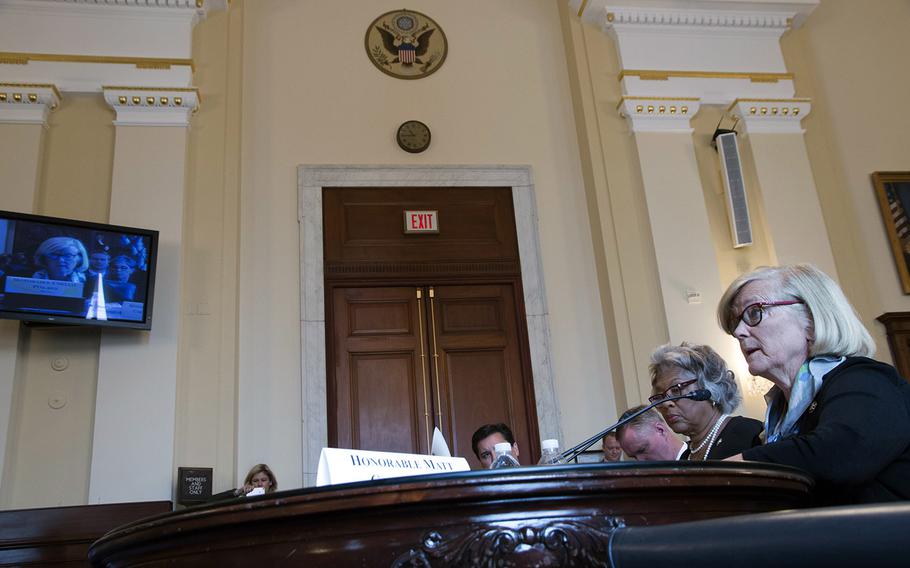 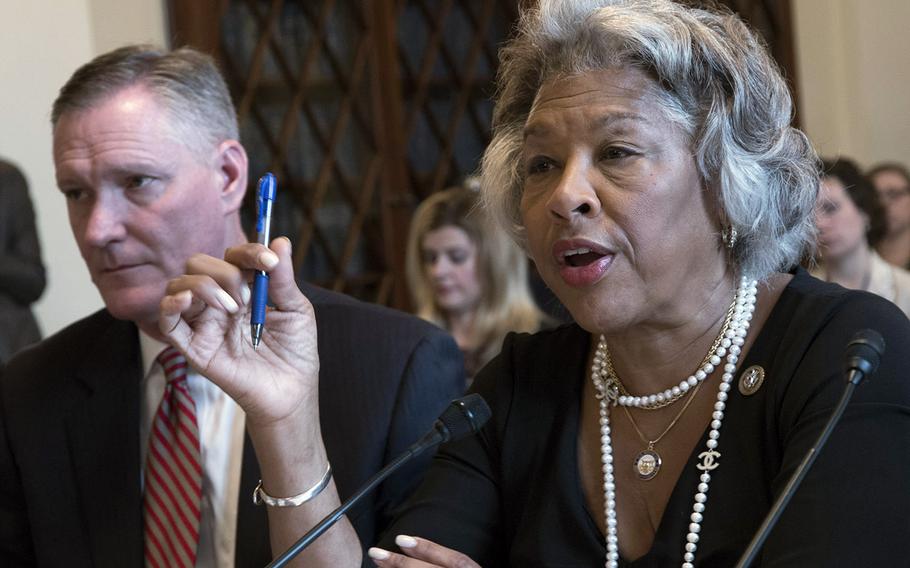 Rep. Joyce Beatty, D-Ohio, speaks at a House Veterans' Affairs subcommittee meeting on Capitol Hill, Sept. 13, 2017. Beatty is a co-sponsor of H.R. 1900, regarding the designation of a National Veterans Memorial and Museum, which was introduced by Rep. Steve Stivers, R-Ohio, at left. (Joe Gromelski/Stars and Stripes)

WASHINGTON – A museum and memorial under construction in downtown Columbus, Ohio, could become known officially as the national site for Americans to reflect on the experiences of veterans.

Rep. Steve Stivers and Sen. Rob Portman, both Republicans from Ohio, introduced legislation to designate the Columbus site as the “National Veterans Museum and Memorial.” A House subcommittee heard initial feedback on the idea Wednesday from veterans service organizations, which were mostly supportive.

“Why Ohio? Because nearly 1 million veterans live in Ohio. It’s an 8-hour drive to nearly one-half of the U.S. population,” said Rep. Joyce Beatty, D-Ohio, who is cosponsoring the House bill. “It makes it a perfect destination.”

The bills by Stivers and Portman state the museum would be the only public site of its kind and exist with purpose of “interpreting the collective experiences of veterans… across all eras, conflicts and branches of the military.” It will be a place for visitors to evaluate American history through the lens of veterans, according to the lawmakers’ bills. The museum might also have the potential to inspire civil engagement and help bridge the divide between civilians and the military.

Plans for the site were initiated in 2013 with the help of astronaut John Glenn, a World War II veteran and former U.S. senator from Ohio. Glenn died Dec. 8. The museum was first intended to honor only the 900,000 veterans living in Ohio, but the scope broadened after project leaders interviewed many Ohio veterans and realized not all of them had strong ties to the state.

Retired Army Maj. Gen. Dennis Laich, who is the chairman of the project’s military advisory committee, said there was a “much bigger story to tell.”

“We realized we could have a much richer fabric if we broaden the scope of the stories,” he said in an interview in October.

The museum will contain veterans’ personal items and tell individual stories of peoples’ military service, as well as their lives afterward, Amy Taylor, one of the project managers, has said.

The Columbus Downtown Development Corporation is the project developer, and the museum – at a cost of approximately $75 million – is being funded with private donations and contributions from the state of Ohio and Franklin County, Ohio.

The uniquely designed building is taking shape on 7 acres near the Scioto River. When complete, it will be 50,000 square feet and made of glass walls and concrete arches leading to a rooftop sanctuary. The site will also have a 300-foot reflective pool and memorial wall. The building is expected to be completed in the winter, with the grand opening planned for the summer of 2018.

“When asked, ‘Why Ohio?’ They said, ‘Because we did it’,” said Alex Zhang, who works for the American Legion. “Truth be told, they raised $75 million and are currently in the construction process of what looks to be a beautiful and thoughtful memorial.”

A subcommittee of the U.S. Committee on Energy and Natural Resources first heard the input on the Senate bill, S. 841, in July. At the hearing, Robert Vogel, acting deputy director for operations at the National Park Service, testified he was concerned the title as a “national” museum would imply the site was under the jurisdiction of the National Park Service. Neither the House nor Senate bill put the site under the management of the park service, and neither include funding for the park service to maintain it.

“This is not the first time the issue of a ‘national’ designation for a nonfederal entity has arisen, nor is it likely to be the last,” Vogel said in his written testimony. “The department respectfully encourages the committee to be thoughtful and judicious in any decision as to whether an entity that has no association with the federal government should have a ‘national’ title.”