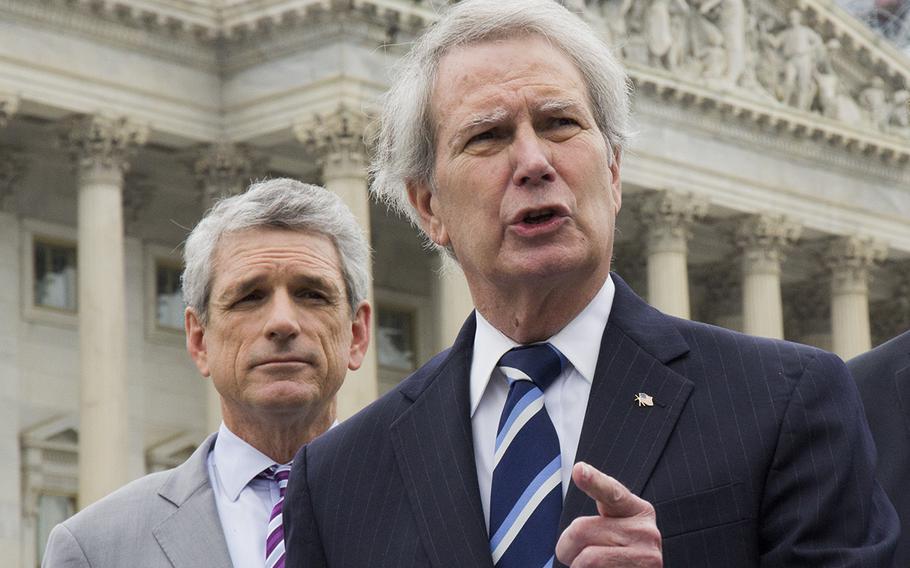 Rep. Walter Jones Jr. (R-NC) calls for Congress to vote on an authorization of military force against the Islamic State on May 12, 2016, in Washington, D.C. At left is Rep. Scott Rigell (R-VA). (C.J. Lin/Stars and Stripes)

Rep. Walter Jones Jr. (R-NC) calls for Congress to vote on an authorization of military force against the Islamic State on May 12, 2016, in Washington, D.C. At left is Rep. Scott Rigell (R-VA). (C.J. Lin/Stars and Stripes) 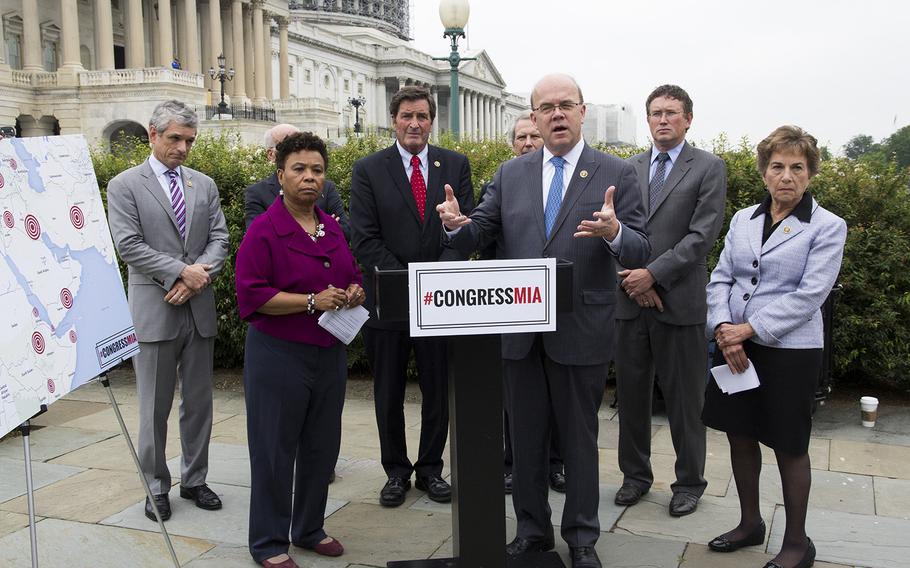 Rep. Jim McGovern (D-Mass.) calls for Congress to vote on an authorization of military force against the Islamic State on May 12, 2016, in Washington, D.C. (C.J. Lin/Stars and Stripes) 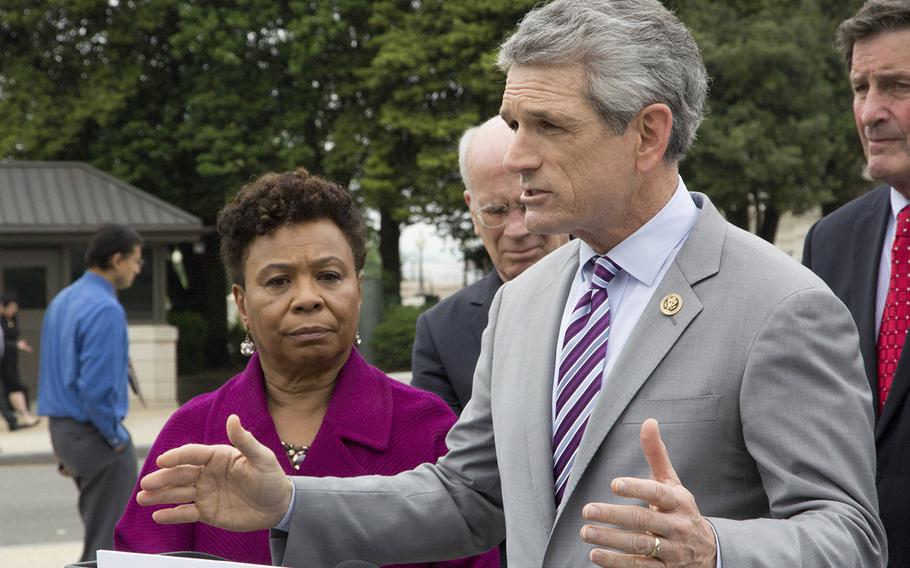 Rep. Scott Rigell (R-VA) calls for Congress to vote on an authorization of military force against the Islamic State on May 12, 2016, in Washington, D.C. (C.J. Lin/Stars and Stripes)

WASHINGTON — Two House lawmakers – both Republicans – slammed their party Thursday, saying Speaker Paul Ryan and other members are avoiding a vote on the Islamic State war as a way to undermine the president.

Reps. Walter Jones, of North Carolina, and Scott Rigell, of Virginia, said Ryan has not delivered a promised House vote on the first war authorization since 9/11 because Republicans believe they are better positioned to criticize President Barack Obama if they do not approve the fight in Iraq and Syria.

The barbs are part of a renewed effort by a small group of House lawmakers to force Congress to weigh in on the war with a vote – a move that has been debated since the United States launched attacks against the Islamic State group in 2014 but failed to gain any real traction on Capitol Hill, despite a White House request for a new war authorization last year.

“It’s easier for the Republican majority to let Obama have blood on his hands,” said Jones, a longtime critic of U.S. interventions in Afghanistan and the Middle East. “The politics of this is why we have not had a debate on this and I’m not sure we are going to have a debate because of the politics.”

Rigell’s district includes Norfolk Naval Station but he recently decided not to run for reelection this fall.

He said his party has argued the president already has the legal power under the old authorization to fight the Islamic State group.

“Whether that is a sincerely held belief or not, I don’t know,” he said.

Obama and the military are now using an authorization passed by Congress 15 years ago to fight al-Qaida as a legal basis for the operations in Iraq, Syria, Libya and elsewhere.

Last year, the White House finally acquiesced to skittish Republicans and suggested language for a new war authorization. Top administration officials came to Congress to testify. But lawmakers said they were still concerned about approving the war because Obama lacked a good plan to defeat the Islamic State group.

Rigell said Defense Secretary Ash Carter and Gen. Joseph Dunford, chairman of the Joint Chiefs of Staff, have advocated for Congress to act. But he said his party has gone silent and does not want to pass any new authorization because it does not want to be seen as helping Obama.

“It pains me actually to say that … some on the Republican side would see this as some type of victory for the president. This too I believe has played into the calculus and that offends me personally and it wasn’t how I was raised,” he said.

Ryan said in December that he believed Congress has a constitutional duty to vote on a new war authorization and that it would show the country is united in the fight against the terrorist group.

But the new speaker, who took the gavel last fall, has struggled to unify a deeply divided House GOP and follow through with core promises such as passing a budget.

On Thursday, Jones, Rigell and a bipartisan group of House lawmakers supporting a vote gathered in front of the Capitol to lob criticism and unveil a new legislative plan aimed at renewing the political debate.

Rep. Barbara Lee, D-Calif., a longtime opponent of war, said she will propose an amendment to a key defense budget bill that will revoke the original war authorization against al-Qaida.

The House is set to debate and vote next week on the annual National Defense Authorization Act, which sets defense policy and is often the target of hundreds of amendments on the chamber floor.

Rep. Jim McGovern, D-Mass., said he too will propose an amendment that would cut off funding for the overseas war effort in April if Congress does not pass a new war authorization for the Islamic State group.

“We are engaged in endless wars with no endgame in sight,” he said.

The proposals are likely a longshot. Last summer, the House rejected a proposal by Lee, Jones and McGovern to pull troops out of Iraq and Syria by the end of the year unless Congress passed a new authorization.

Opponents cast the potential pullout as a dangerous risk. The final vote against it was 139 to 288.