Lawmakers battle in the final hours to avert government shutdown 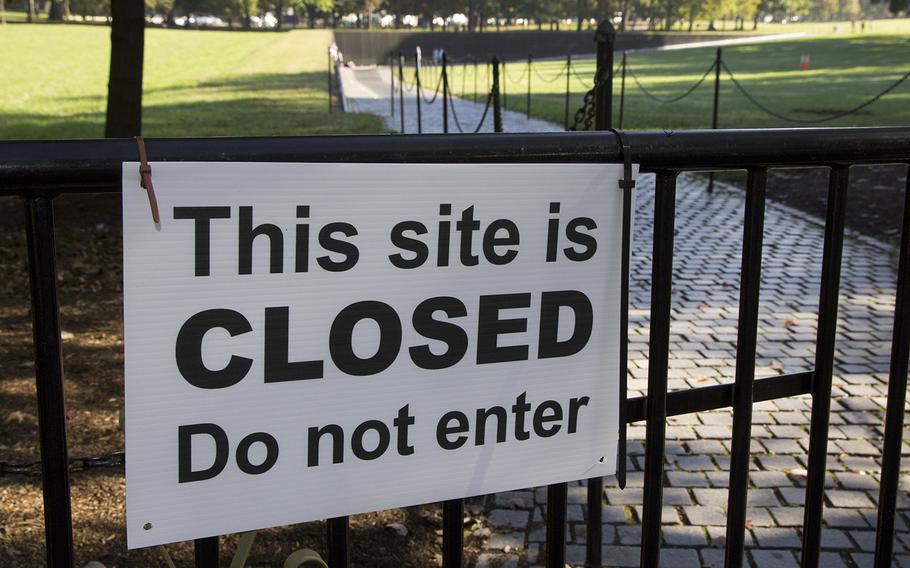 Buy Photo
When the U.S. government shut down in 2013, among the areas affected was the Vietnam Veterans Memorial in Washington, D.C. (Stars and Stripes file photo)

WASHINGTON – Congress is barreling toward yet another deadline to keep the federal government up and running.

Funding is slated to run out by late Friday evening and without a temporary budget deal, the government will shut down, triggering a disruption to many federal operations and services, including military pay and programs.

As of Thursday afternoon, lawmakers were struggling to reach a bipartisan deal.

“Risks are increasing substantially for a government shutdown, as it’s not clear who has the leverage or how to get to the votes on a short-term continuing resolution,” said Lauren Fish, a defense strategies research associate for the Center for a New American Security, a Washington think tank. “Everyone thinks someone else will be left taking the blame for a shutdown, so political expediency is increasing the risks.”

To pass a stopgap budget bill, Republicans need votes from Democrats, who are holding out for an extension to the Deferred Action for Childhood Arrivals, or DACA, program, which is facing a March 5 deadline.

Rhetoric related to the negotiations has escalated in recent days, as President Trump was accused of making disparaging remarks about Haiti and African nations. And those matters were further complicated when he tweeted Thursday that the Children’s Health Insurance Program, another key concern for Democrats, should not be part of a short-term deal.

A shutdown would force the federal government to send home nonessential workers without pay, close national parks and museums and trigger new administrative delays. It will also affect the Department of Defense.

A 16-day shutdown in October 2013 caused a rash of military programs to come to a sudden halt, including pay stoppage for military and civilian personnel and the disruption of base services such as commissaries. In addition, death gratuity payments for 30 Gold Star families were also disrupted.

“The impacts … extend beyond the DC ‘swamp,’” Fish said. Department of Defense “employees don’t get paid, unless special provisions are put in place -- that includes soldiers downrange, depot workers maintaining aircraft and ships, and childcare providers on base. Usually military servicemembers get paid, but if the process is rushed, arrangements can be forgotten, like the civilians who process such payments or death benefits.”

The military, along with the rest of the government, is operating off its fourth short-term funding bill since the fiscal year started Oct. 1. It’s become a common practice for Congress to rely on the temporary spending measures, known as continuing resolutions, which are used until a full budget is approved.

Some Capitol Hill watchers were still hopeful lawmakers will reach a deal.

“I still think no shutdown is more likely than a shutdown,” said Molly Reynolds, a governance studies fellow at the Brookings Institution, a liberal-leaning think tank in Washington. “But the biggest difference… this time is that Senate Democrats seem more willing to possibly dig in.”

Andrew Sherbo, a University of Denver finance professor who has tracked government budget issues, said while there is a larger potential for a shutdown this time, he sees another temporary funding plan passing.

“In my view, they will get (a continuing resolution) through Feb. 16, but the next one would pose serious risks” of a shutdown if DACA is not resolved, Sherbo said.

This, as a House Republican contingent known as the Freedom Caucus pushes for harder line on immigration and some defense hawks push against temporary funding deals that undercut planning, readiness and stability for the military.

“Our military is being used as a bargaining chip for completely unrelated items. The defense budget is being held hostage for DACA, which is not a deadline that expires tomorrow,” House Speaker Paul Ryan, R-Wis., said Thursday during a talk on defense issues at the Washington think tank Center for Strategic and International Studies. “We should not be holding hostage the military for this. It’s completely unrelated. Those are the partisan games being played right now.”

The comments were a departure from those issued a day earlier by Sen. Lindsey Graham, R-S.C., a chief negotiator vying for a bipartisan immigration deal.

“For the Republicans to believe we will get all the defense funding we desperately want and need and we’ll deal with the dreamers later, how naïve can you be?” he said. “We need to deal with the DACA issue.”

By Thursday evening, a House vote was scheduled to consider a Republican plan to extend funding until mid-February and address a fix for the Children's Health Insurance Program. It still wasn’t clear hours ahead of the vote, however, if the plan could muster enough support to pass.

The tally of Senate Democrats opposed to the plan was growing by Thursday afternoon.

“We oppose the House continuing resolution,” Virginia Democrats and U.S. Sens. Mark Warner, a member of the Senate Finance and Budget Committees, and Tim Kaine, a member of the Senate Armed Services and Budget Committees, said in a joint statement. “We will support a short-term CR for a few days to keep the government open while we stay in town and conclude our negotiations. …The Republican leadership has to get serious about finding a budget deal and quit relying on short term patches.”

Military service secretaries and chiefs, in addition to the Defense Secretary Jim Mattis, have urged Congress to avoid a shutdown, Fish said.

“The planning and preparation for a shutdown expends a lot of staff time, including senior leader time,” she said. “Instead of focusing on adversary threats, these key leaders are dealing with the threat we’ve created ourselves.”