Lawmaker: Women could be the answer to military’s recruiting woes 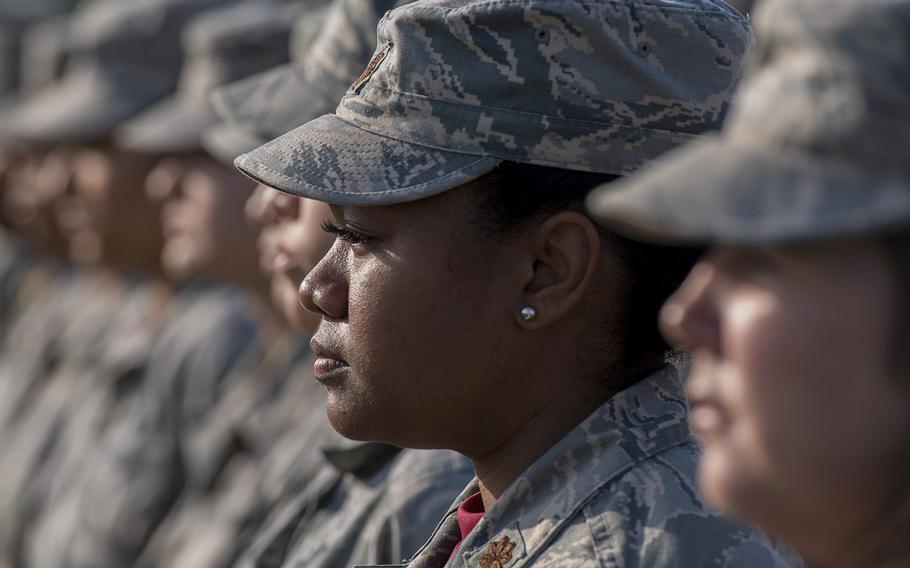 Airmen stand at attention during a retreat ceremony Mar. 30, 2018, on Kadena Air Base, Japan, where an all-female formation was coordinated in honor of Women's History Month. (Micaiah Anthony/U.S. Air Force)

WASHINGTON – Recruiting more women into the military could address the dwindling percentage of eligible candidates for service, a congresswomen said Friday.

With military leadership citing eligible prospects for service has dropped in the younger population to about 1 in 4, Rep. Niki Tsongas, D-Mass., said women still represent a minority in the U.S. armed forces. She said recruiting woes could be tackled in part by targeting women because more than half of them are eligible to serve.

“The volatile nature of today’s security environment and the complexity of threats our country faces do require the military services to recruit from a talent pool that is as broad, as talented and as diverse as possible,” Tsongas said during a House Armed Services Committee subpanel hearing on military personnel issues. “There’s much to be done. But we want to have the best service as possible. So we need to recruit fully from all that this country offers.”

The comments, which were part of a wide-ranging hearing for the military personnel subcommittee, could also play into the development of the next National Defense Authorization Act, which directs policy and spending plans for the Defense Department.

Rep. Mike Coffman, R-Colo., chairman of the subcommittee on military personnel, said each branch of service must be innovative to overcome their recruiting challenges. The Army, specifically, has found only about 1 in 4 people aged 17 to 24 are eligible to enroll with the service, and only 1 in 8 has the propensity to enlist.

“With the difficult recruiting and retention environment driven by a lessened overall propensity to serve, reduced pool of qualified candidates and a robust economy, the competition for recruits will be difficult and you will all be competing for the same pool,” Coffman said.

The personnel chiefs for each service testifying at Friday’s hearing said they are focusing more efforts on recruiting women, displaying women more prominently in marketing campaigns and reaching out in new places, such as female athletic programs.

“We have gone places that we haven’t gone in the past,” said Marine Corps Lt. Gen. Michael Rocco, deputy commandant for manpower and reserve affairs. And “we have been more aggressive in displaying a diverse Marine Corps.”

Tsongas pointed to a recent report from Defense Advisory Committee on Women in the Services, or DACOWITS, that found only 29 percent of people ages 18 to 23 are eligible to serve after adjustments are made for disqualifications based on standards for medical, physical health, weight, mental health, drug use, aptitude and other concerns. Of that remaining eligible population, more than half are women, yet less than 20 percent of today’s active-duty force is comprised of women, Tsongas said.

“In an era where the eligible military recruiting population remains on the decline, it is more important now than ever that we recruit from the entire population, and not overlook the opportunity that half of the eligible nation’s talent pool would provide the services,” she said.

The service personnel chiefs said they are seeing improvements.

Army Lt. Gen. Thomas Seamands, deputy chief of staff, said figures continue to grow for women in ROTC programs and for their service academy, where about 22 percent of students are women. And with all specialties now open to women, they are making strides and that will influence the next generation of recruits.

“As we see those role models come out and successfully lead and do wonderful things in our formations, I think you will see increased females across the formations,” Seamands said. We are “very excited about what the females are doing in the Army and… there’s no limit to what they can do in the future.”

In the Navy last year, the academy’s graduating class was 27 percent women, with six in the top 10 graduates, said Vice Adm. Robert Burke, chief of naval personnel. The service has upped its marketing of women as well, showing them in commercials airing now, including one spot during the last Army-Navy football game.

Air Force Lt. Gen. Gina Grosso said addressing the concern starts with messaging, repeating the words of service Secretary Heather Wilson, who testified last month that the first protector is the mother. That needs to translate into all the services, Grosso said.

“We have to change the messaging that there is a place for women,” Grosso said. “There are definitely some systemic things we need to do.”