Lawmaker looking for an end to on-base gambling 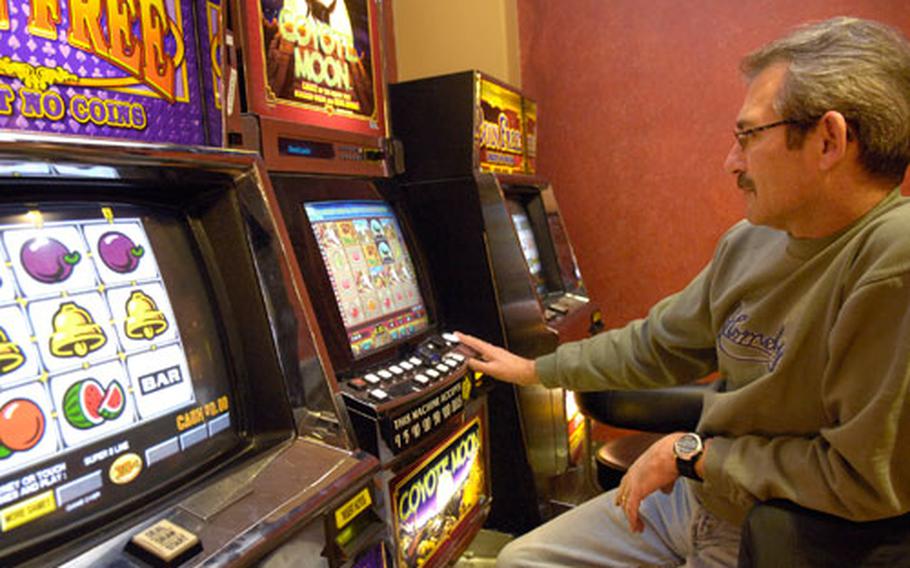 Bill Whipple tries his luck at one of Baumholder’s slot machines Dec 17th, 2007 at Striker’s bowling alley. A bill has been introduced in Congress that would eliminate gambling on all military bases overseas, including slot machines and bingo games in military clubs. (Ben Bloker / S&S)

Rep. Lincoln Davis, D-Tenn., calls the measure a way to protect troops from a dangerous and addictive pastime. State lottery ticket sales and charitable events would be exempt from the ban, but the rows of slot machines at many overseas bases would be removed.

But Defense officials disputed that, saying the services do offer help for gambling addicts and the games represent another recreational opportunity for overseas troops and their families.

&#8220;Slot machines are not viewed as a stand-alone recreational program, but as another opportunity in the context of the recreational activities where they are collocated,&#8221; said Defense spokesman Lt. Col. Les&#8217; Melnyk. &#8220;The gaming machine program provides a controlled alternative to unmonitored host-nation gambling venues.&#8221;

According to Army Morale, Welfare and Recreation documents, revenue from all overseas military slots totaled more than $120 million in fiscal 2006, nearly $94 million from Army machines alone.

Army Recreation Machine Program officials operated 3,275 gaming machines in 137 locations worldwide. Pentagon officials did not respond to requests for figures on gaming machines run by the other services overseas.

Video poker and similar gambling machines are not permitted at stateside military bases.

Profits from the slots are returned to service MWR activities, and defense officials say that payouts from the military machines are higher than most typical U.S. casinos.

But Davis, who opposes gambling on moral grounds, said the real issue is the potential for addiction caused by the games.

Department of Defense health behavior studies in the 1990s and in 2002 all found between 5 percent and 9 percent of military personnel had experienced a gambling-related problem in their lifetime, and about 2 percent fit the classification for pathological gambling problems.

That&#8217;s higher than the national average of just under 1 percent, according to John Kindt, a University of Illinois business professor who has studied gambling in the military.

Both he and Davis criticized the military&#8217;s assistance programs as too small, but Melnyk said officials are &#8220;committed to ensuring that the program is well managed and responsive to our customers.&#8221;

No hearings have been set on the legislation. Davis said he is working with contacts in the Senate to introduce companion legislation to his bill next month.