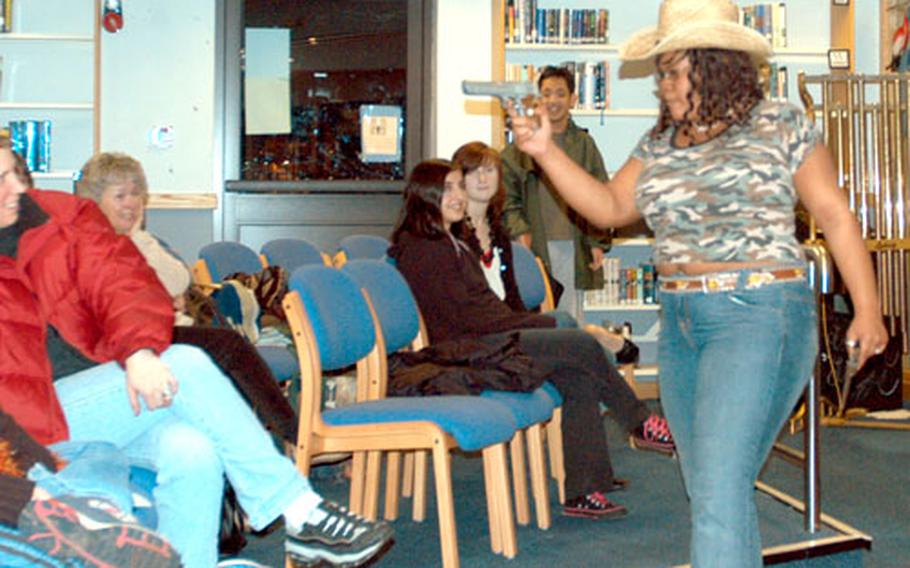 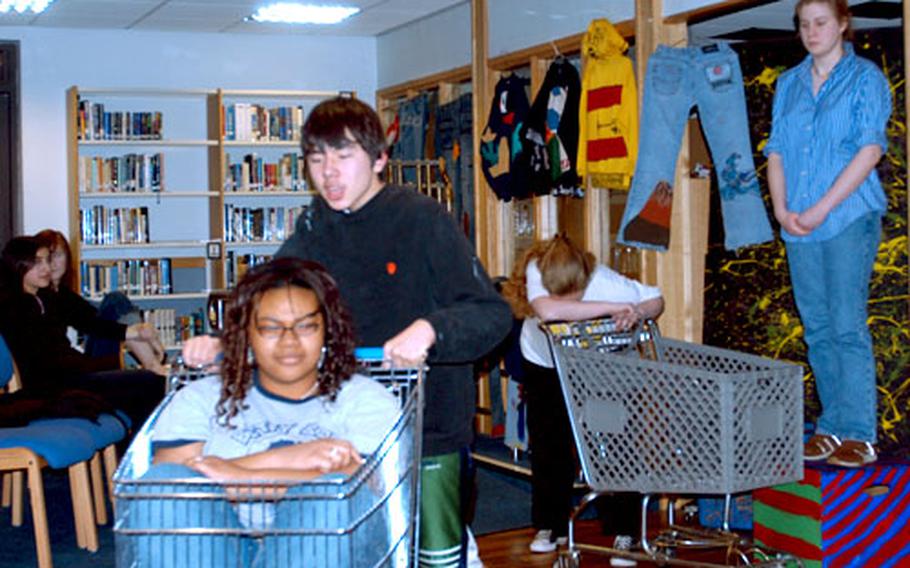 Lloyd Kimpton pushes Amber Howard in a shopping cart during “Fairy Tale: Wal-Mart!” Miranda Fluhrer, head down, and Bailey Lenart are in the background. The skit was part of the Lakenheath High School Drama Club production of “Loadsa Laffs.” (Bryan Mitchell / S&S)

A handful of episodes fell flat due to stilted writing, poor delivery or forgettable characters reciting stale lines. But the majority of the episodes hit challenging comedic notes just right, leaving the audience in stitches.

The first act, in particular, was packed with skits that rang true but still provided the ridiculously exaggerated sense of reality essential to comedy. And, as is often the case in comic acting, the funniest takes sprung from the moments when the actors allowed silliness to supersede motivation.

In &#8220;Sure Thing,&#8221; Tristan Gooding and Miranda Fluhrer kept the audience rolling with what could have been a clich&#233;d boy-meets-girl-in-coffee-shop skit that played with time, gender roles and literary expectations.

&#8220;I consider myself a citizen of the universe,&#8221; Gooding said in an effort to woo the pretentious Fluhrer.

Two of the skits pulled off a rare coup of comedy by achieving both laughs and introspection.

&#8220;Fairy Tale: Wal-Mart!&#8221; asked the audience to question the proliferation of the world&#8217;s largest retailer by pitting a typical American couple against the economic behemoth in a test of wills.

The skit &#8220;English Made Simple,&#8221; meanwhile, delved into the true meaning of everyday utterances to unlock the secrets of human communication. The students may be only infants in the world of complex adult relationships, but they demonstrated aplomb in navigating the oft-daunting terrain of what is clearly more than everyday banter.

All told, &#8220;Loadsa Laffs&#8221; did well to live up to its moniker and proved that comedy is sometimes more likely to be found at the end of a $2 ticket to a high school library than at in an ill-conceived Hollywood flopbuster.