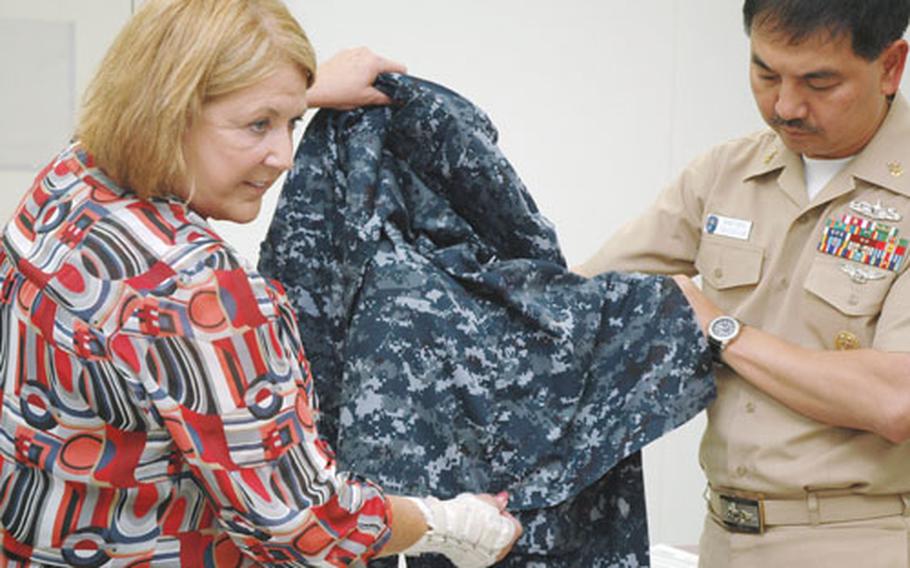 Jo Johnson, a uniform operations specialist with the Navy Exchange Service Command, talks about the new Navy working uniform at Yokosuka Naval Base. Johnson and others from the exchange command on Wednesday briefed 7th Fleet Command Master Chief Marc Sibal, right, and other command chiefs on the details of the new NWU and service uniforms that are expected in the next year. (Teri Weaver / S&S)

YOKOSUKA NAVAL BASE, Japan &#8212; The shorts for the Navy&#8217;s new fitness uniform come with a lining so uncomfortable, some say, that sailors have begun ripping it out.

So, even as sailors in Japan were buying the new blue shorts and gold shirts last week, the Navy already is making changes to provide better comfort, according to officials from the Navy Exchange Service Command.

The physical training uniform is just the first of a series of new uniforms for the Navy, according to Command Master Chief Larry Darnell of the exchange command.

Darnell and others are in the Pacific this month to explain the uniform changes to enlisted leaders and local exchange workers.

A new black and khaki service uniform for sailors ranked E-1 to E-6 will begin rolling out on the West Coast this summer, according to Jo Johnson, a uniform operations specialist with the exchange command. The blue, digitized Navy working uniform, for all ranks in the service, will begin rolling out in the winter of 2009, she said.

Johnson, who has been working with Navy uniforms for three decades, complimented the black trousers in the women&#8217;s service uniform. "This is one of the most beautiful women&#8217;s pants we&#8217;ve ever had," she said of the black trousers, which have no belt, a front fly and side pockets. The blouse for females, however, is proving harder to fit. "This is going to be our hardest challenge," she said of the "overblouse," which rests untucked and must fit each woman in regulation places at the waist and hip.

The Navy is making multiple sizes to fit a variety of women. So far, samplings have shown that about 85 percent of female sailors can find a suitable shirt from pre-made stocks, Johnson said.

But that other 15 percent? Those women will have to pay to have the blouse tailored, Johnson said. And that tailoring will involve ripping the entire shirt apart so that the seams end up in the regulation places after adjustments, she said. She didn&#8217;t know an estimate for that tailoring charge.

Fitting the sample NWUs, so far, has gone well, she said. The cargo-style pants will likely require no hemming because the pants will blouse around boots. And the untucked blouse can hit the hip in a range around the cargo pocket and remain within regulation, Johnson said.

The maternity version of the NWU will come with a welcome addition, Johnson said. The shirt will have four buttons along the rib seam to allow the shirt to expand as the baby grows.

The NWU will also come with an all-weather parka made of special material that remains water- and wind-proof with two caveats: it cannot be punctured, even with a sewing needle, and it must be dried in a clothes dryer.

Because no patches can go on the parka, the Yokosuka chiefs raised concerns about how each sailor will identify his or her jacket. A second concern involved the jacket&#8217;s side vents, a zipper down the sleeve to allow air to circulate on hot, rainy days.

Why, one chief asked, doesn&#8217;t the vent run down the rib cage so that a sailor on watch can easily reach his weapon?