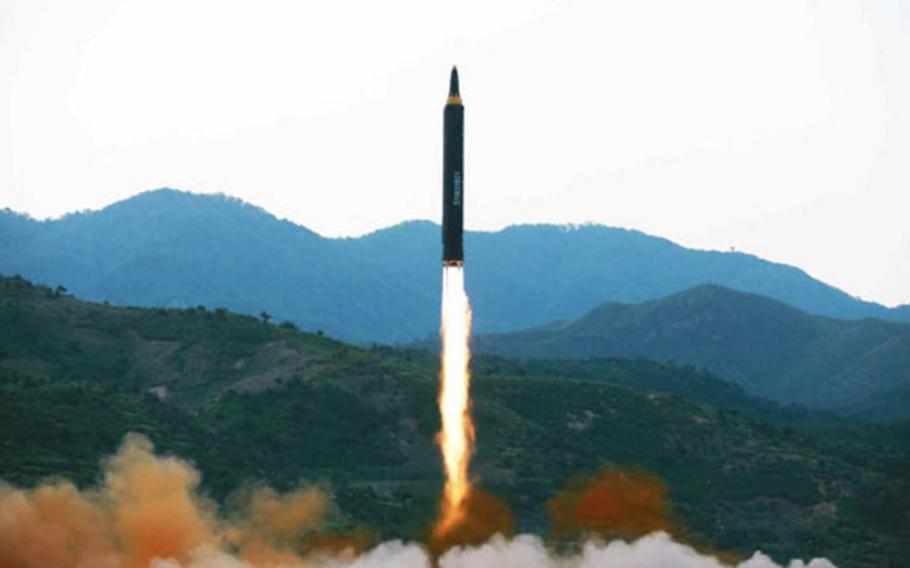 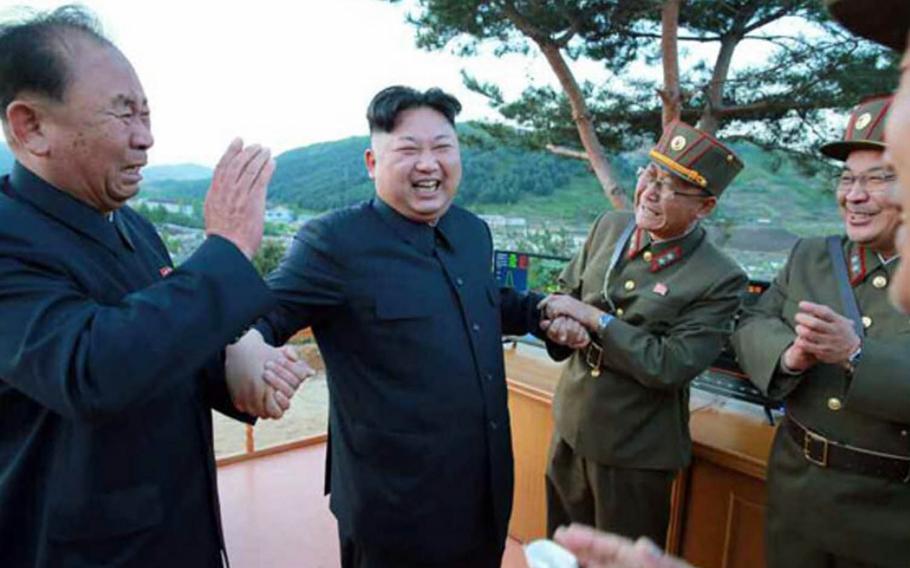 North Korean leader Kim Jong Un smiles as he apparently celebrates the test launch of a new type of missile, Sunday, May 14, 2017. (Courtesy of Rodong Sinmun) 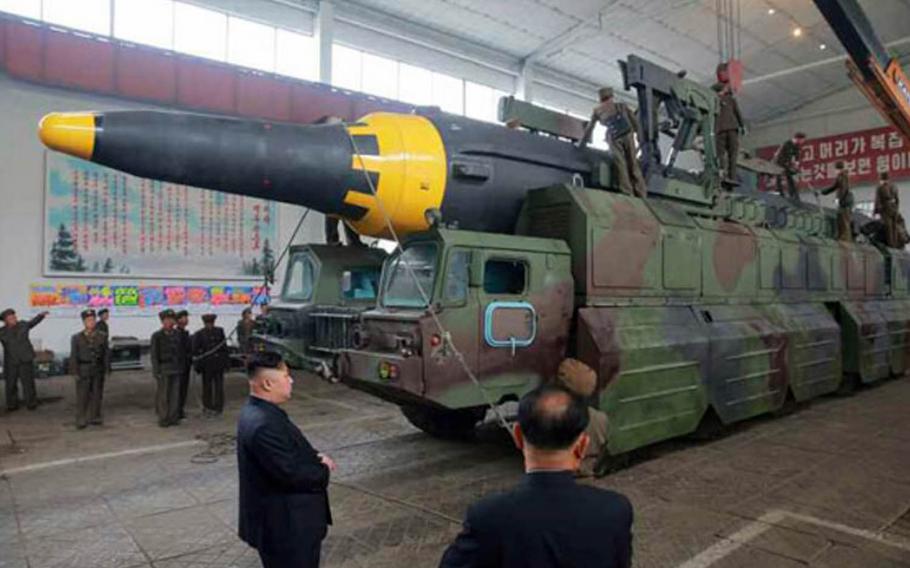 North Korean leader Kim Jong Un is shown watching a missile being loaded onto a launcher in this undated photo published Monday, May 15, 2017, in the official Rodong Sinmun newspaper. (Courtesy of Rodong Sinmun)

SEOUL, South Korea — North Korea’s latest missile test was one of its most successful yet and may have been a major step toward its goal of developing an intercontinental ballistic missile that could reach the U.S. mainland, experts said.

The North’s state-run news agency reported Monday that it had successfully tested a new ground-to-ground “medium long-range” ballistic rocket that could carry a heavy nuclear warhead.

The Korean Central News Agency said the missile traveled 490 miles and reached a maximum altitude of 1,311 miles on Sunday. While Pyongyang frequently exaggerates its claims, the distances were roughly similar to those given by U.S., Japanese and South Korean military officials.

The missile, called Hwasong-12, was fired “at the highest angle in consideration of the security of neighboring countries,” KCNA said. “It also verified the homing feature of the warhead under the worst re-entry situation and accurate performance of detonation system.”

North Korean leader Kim Jong Un oversaw the launch and was shown in photos published in state-run media watching as the missile was loaded onto a launcher and later smiling with military officials in apparent celebration.

Kim was quoted as warning the United States that its mainland and military operations in the Pacific are in “sighting range” and that North Korea “has all powerful means for a retaliatory strike.”

North Korea has made faster-than-expected progress in its nuclear weapons program, which it claims is for self-defense, despite several rounds of tightened U.N. Security Council sanctions aimed at persuading it to denuclearize.

It’s unlikely that the North has re-entry technology needed for the warhead to return safely back into the atmosphere, said South Korea Defense Ministry spokesman Moon Sang-gyun. He declined to discuss other KCNA claims about the missile technology, saying more analysis was needed.

Japanese officials have said the missile flew for half an hour and reached an altitude of about 1,240 miles before landing in the sea between the Korean peninsula and Japan.

John Schilling, an aerospace engineer and North Korea specialist, said the missile would have flown some 2,800 miles if launched on a maximum trajectory. That could put it in range of Andersen Air Force Base on Guam.

“North Korea’s latest successful missile test represents a level of performance never before seen from a North Korean missile,” he wrote on the 38 North website, which is run by the U.S.-Korea Institute at Johns Hopkins University.

He said it “more importantly, may represent a substantial advance to developing an intercontinental ballistic missile” by testing ICBM subsystems such as engine performance.

North Korea has stepped up its nuclear weapons program since Kim took power in 2011 after his father, Kim Jong Il, died of a heart attack. It has conducted two underground nuclear tests and test-fired more than 30 missiles since last year.

Experts say it is likely a matter of years before the North has an operational ICBM, but it is not yet believed to have miniaturized a nuclear warhead that could be mounted on the missile or to have developed the re-entry technology for it to re-enter the atmosphere and hit its target.

The missile test was the first major security challenge for South Korean President Moon Jae-in, who said in his inaugural address last Wednesday that he would be willing to travel to Pyongyang to try to achieve peace on the divided peninsula.

Moon called the launch a “reckless provocation” and warned Pyongyang not to test his resolve, but he continued to dangle the possibility of dialogue “if North Korea changes its attitude.”

President Donald Trump’s administration has given mixed signals about its willingness to return to negotiations over North Korea’s nuclear program. Trump has said he would meet with Kim under the appropriate conditions, although the White House walked back the statement saying the conditions were not currently right.

Trump, who also has ordered warships to the region and vowed to keep the possibility of military action on the table, called for toughening sanctions after the launch. The U.N. Security Council planned to hold closed consultations about the launch on Tuesday.

A top North Korean diplomat, meanwhile, said her country would be willing to meet with the Trump administration “if the conditions are set,” although she didn’t elaborate.

Choe Son Hui, the foreign ministry’s director general for North American Affairs, spoke to reporters Saturday in Beijing after leading a delegation in an informal meeting with former U.S. officials in Norway, according to The Associated Press.

There have been several such informal meetings since official six-party negotiations involving North and South Korea, the United States, China, Russia and Japan broke down in 2008.

Washington has insisted the North agree to abandon its nuclear program before resuming talks.

Woo Jeung-Yeop, director of the center for security policy at the Asan Institute for Policy Studies in Seoul, said the latest missile test is an example of the North’s determination to be accepted internationally as a nuclear power.

“When they say they want to talk it means on their own terms,” he said in a telephone interview. “They want to be in a better position if they enter negotiations … so they will try to make the stakes very high.”

U.S. Ambassador to the U.N. Nikki Haley appeared to rule out the possibility of talks, saying the U.S. would continue to “tighten the screws” on North Korea and claiming Kim Jong Un is in a “state of paranoia.”

“Having a missile test is not the way to sit down with the president, because he’s absolutely not going to do it,” she said Sunday on ABC’s “This Week” program.