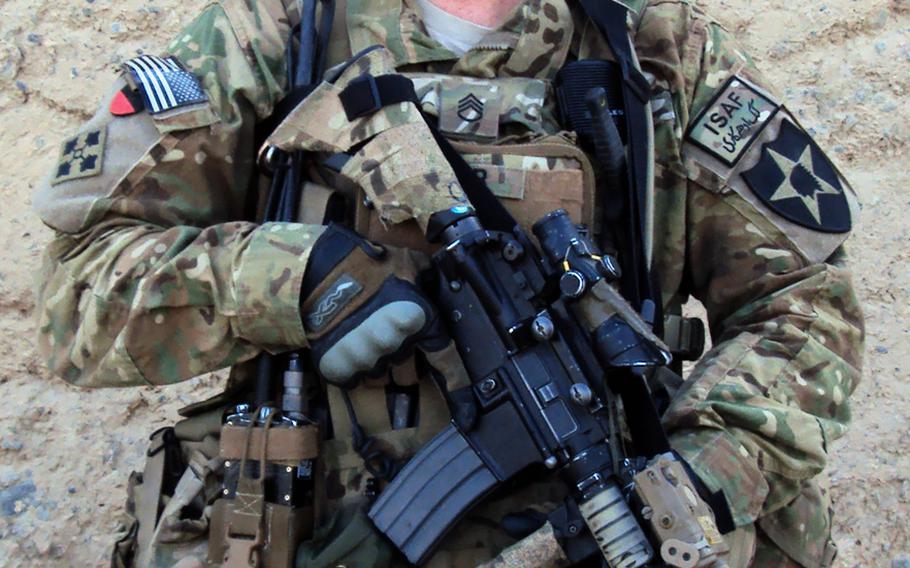 Spc. Ty M. Carter and Spc. Jonathan Adams, the Blue Platoon forward observer, look at the village of Kamdesh, Afghanistan, while on their first patrol out of Observation Point Fritsche, May 2009. (U.S. Army) 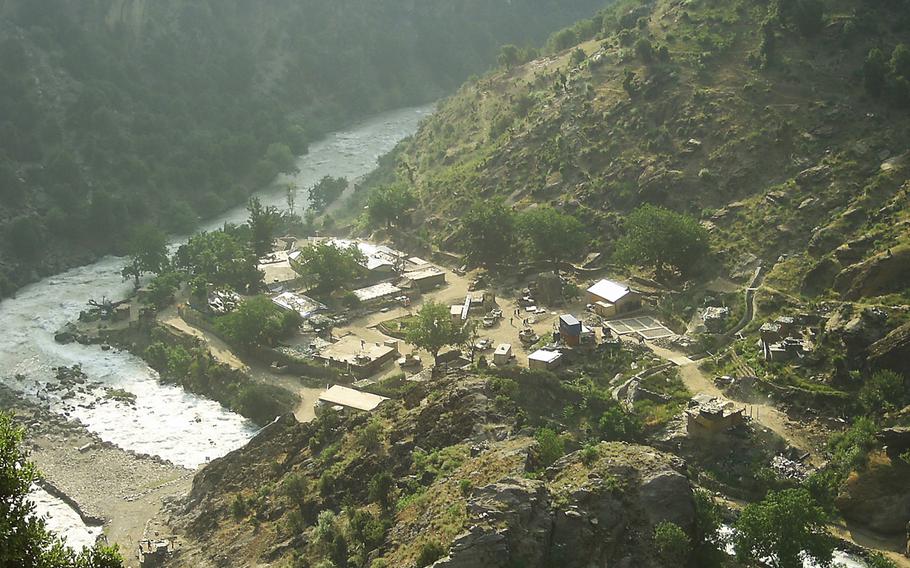 Pictured is a view of Combat Outpost Keating on the Pakistan-Afghanistan border in a remote pocket of Afghanistan, known as Nuristan. According to soldiers who called the outpost home, being at Keating was like being in a fishbowl or fighting from the bottom of a paper cup. It was there, surrounded by mountains and insurgents, that former Staff Sgt. Clinton L. Romesha and his fellow soldiers fought back the enemy in a fierce 12-hour battle, Oct. 3, 2009. (Brad Larson/U.S. Army)

WASHINGTON — The White House decision to award Army Staff Sgt. Ty Carter with the Medal of Honor for bravery in Afghanistan once again puts the spotlight on the deadly 2009 battle at Combat Outpost Keating, and the controversy surrounding it.

Staff Sgt. Clint Romesha has already received a Medal of Honor for his actions in that fight, rallying his men to repulse hundreds of Taliban attackers who breached the walls of the remote outpost.

Carter’s award, to be presented by the president Aug. 26, makes him just the fifth living Medal of Honor recipient for actions in Afghanistan. Nine other soldiers have received Silver Stars for their actions in that fight, along with numerous Bronze Stars and Purple Hearts.

But the daylong battle also left eight American soldiers dead and 22 more wounded, making it one of the deadliest military fights in decades. In the months that followed, two Army officers were disciplined for “inadequate planning” in setting up the base and reacting to reports of planned attacks.

During Romesha’s Medal of Honor ceremony in February, President Barack Obama noted that later investigations found the soldiers were effectively forced to “defend the indefensible” at COP Keating. He also stated that was a situation they never should have been put in.

On Oct. 3, 2009, more than 300 Taliban fighters descended on the remote outpost in a valley outside Kamdesh, near Afghanistan’s border with Pakistan.

At daylight, attackers swarmed the hillsides surrounding the base, pinning down the U.S. soldiers. At the start of the fight, then-Spc. Carter sprinted 100 yards across open ground, under heavy fire, to join fellow soldiers at the southern end of the outpost.

According to Army reports, Carter ran through enemy fire again to retrieve supplies for his men. As fighting intensified, he and three other soldiers became trapped in a Humvee, and were wounded as rocket-propelled grenades exploded all around.

He carried one wounded comrade — Spc. Stephan Mace — through a hail of bullets back to cover. He tended to his wounds and returned fire as the battle raged, and managed to call reinforcements from the other side of base as the soldiers tried to regroup.

After Carter and his band of soldiers linked up with Romesha, he acted as a sniper for teams covering the bodies of fallen comrades. Army officials say he even braved enemy fire to cut down a tree next to an aid station to prevent a fire from spreading.

The 12-hour fight at COP Keating is now the first military battle to warrant two Medals of Honor since the 1993 “Black Hawk Down” firefight in Mogadishu, Somalia. Sgt. 1st Class Randall Shughart and Master Sgt. Gary Gordon were awarded posthumous medals for their heroism.

Jake Tapper, who chronicled the battle and the ensuing controversies, in his writings noted that the last time two living servicemembers received the Medal of Honor for the same battle was almost 50 years ago, when Spc. 4th Class Raymond Wright and Sgt. Leonard Keller were honored for actions in the Battle of Ap Bac in Vietnam.

In the book, Tapper noted that Carter joined the Marines out of high school but was busted down to a lower rank because of fighting. He left the service and did odd jobs for five years before returning to the military, this time with the Army.

Carter is currently assigned to the 7th Infantry Division at Joint Base Lewis-McChord in Washington. His wife, three children and surviving soldiers from the 2009 battle are all expected to attend the White House medal presentation ceremony next month.