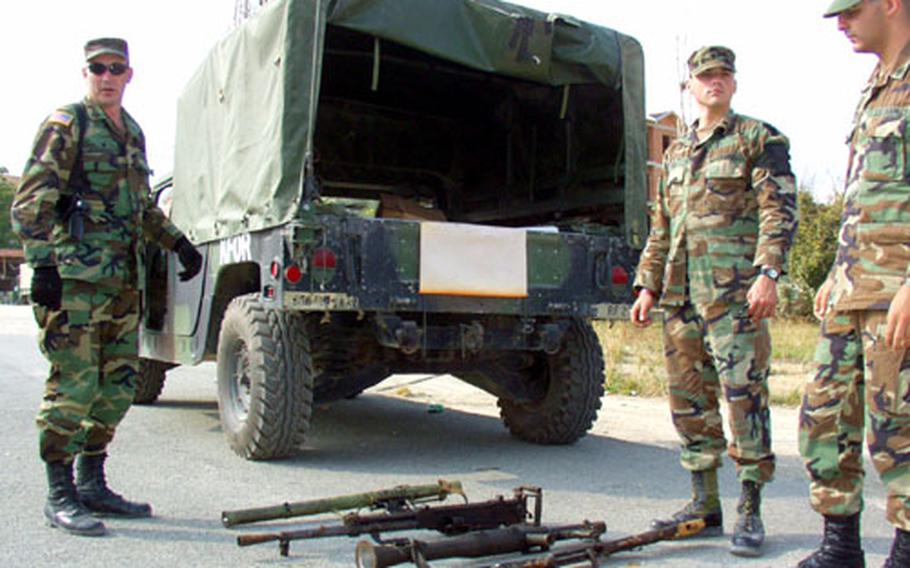 GNJILANE, Kosovo &#8212; Troops in the Multi-National Brigade (East) sector of Kosovo Force, where camps Bondsteel and Monteith are housed, are disappointed in the low turnout rate of the latest monthlong weapons amnesty program.

Initially, military officials hoped to sweet-talk illegal gun toters into handing over their weapons by giving cash to any county that turned in more than 300 weapons.

But military officials changed their minds and will now give the money to the three municipalities that turn over the most weapons, said Maj. Anthony Frey, fire support officer for Task Force Falcon. The amount of cash to be given out was unavailable.

Civilians say the military needs to change its tune if it wants to see some real response to the amnesty program.

&#8220;Everybody would turn in their weapons if the military just made a program that would give people a license to have the weapons that they own,&#8221; Alban Beqiri, a Kosovar Albanian living in Urosevac, said through an interpreter. &#8220;Nobody wants to just give away something that they own, that they paid for.&#8221;

Also, civilians believe that there aren&#8217;t too many more weapons left to be turned in. Soldiers believe otherwise.

At his point, three sniper rifles, five rocket-propelled grenades and four machine guns were turned in.

&#8220;At first hardly anything was turned in, but as time started dwindling down some weapons started showing up,&#8221; said Sgt. 1st Class Joseph Ackerson, who manned the same point in Gnjilane.

Ackerson said that even though all the weapons turned in were old and rusted, they still worked.

Ackerson explained that the grease keeps the weapons working, while burying them keeps them out of sight in case of a military weapons raid through the town.

&#8220;Every time an illegal weapon is taken off the street, there is success,&#8221; Brig. Gen. Jerry G. Beck, commander of Multi-National Brigade (East), said during a news conference Thursday. &#8220;Every time another grenade is turned in, there is another life spared. Every time ammunition is recovered, there is one less argument that ends in someone being wounded or killed.&#8221;

The weapons amnesty program went through September and allowed for any illegal weapons to be turned in without question.

Illegal weapons found at other times will be turned in to the U.N. Development Program for disposal, and owners could be fined and sent to jail.