Last of the Dragon Slayers bid farewell to Camp Sears 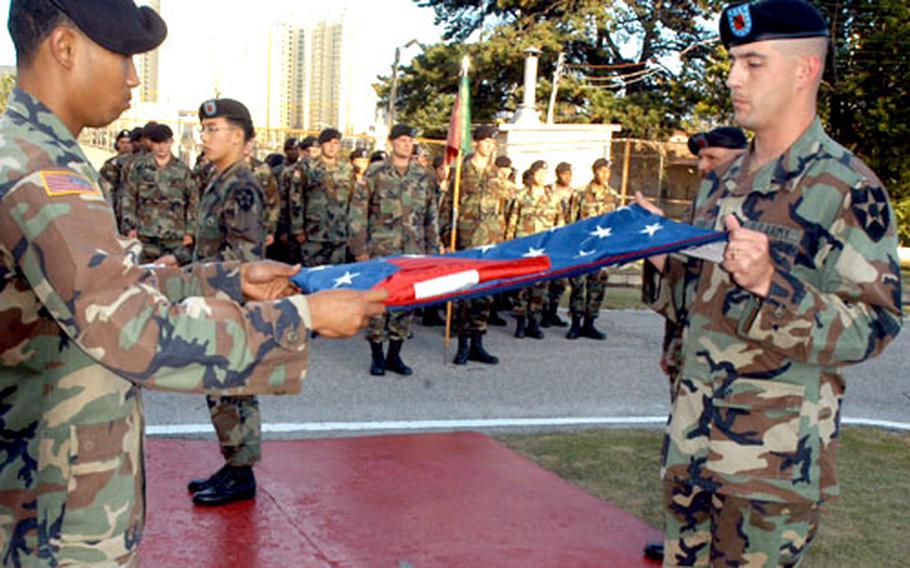 CAMP SEARS, South Korea &#8212; The 2nd Infantry Division bid farewell to this base after more than 50 years with the departure of the Dragon Slayers &#8212; 5th Battalion, 5th Air Defense Artillery Regiment &#8212; on Wednesday.

Just a few dozen of the 150 5-5 soldiers who served at the base this year were on hand to watch the battalion colors cased. Most had left for 5-5&#8217;s new home at Fort Lewis, Wash., after packing up hundreds of pieces of equipment and vehicles to be transported to the United States or transferred to other units in South Korea.

During the ceremony, commander Lt. Col. Dan Sauter praised his soldiers for their hard work over the past few months, vacating the facility and moving their equipment.

Teachers and children from the nearby Gum-Oh Elementary School, for example, visited the base each Christmas to sing carols for the soldiers, Sauter recalled.

&#8220;Today is about more than a battalion vacating a camp in the Republic of Korea and returning to the States. It is a recognition of the people who have helped mold our soldiers into the unit they are today. For three decades,&#8221; he said, &#8220;5-5 has been part of one of the greatest teams in the U.S. Army: the 2nd Infantry Division.&#8221;

In South Korea, 5-5 operated Avenger Air Defense Artillery units, which fire Stinger missiles at low-altitude targets. At Lewis, the unit will field the Surface Launched Advanced Medium Range Air-to- Air Missile. The missiles originally were used only as air-to-air missiles, but improved technology lets them be fired from the ground against long-range air threats, Sauter said.