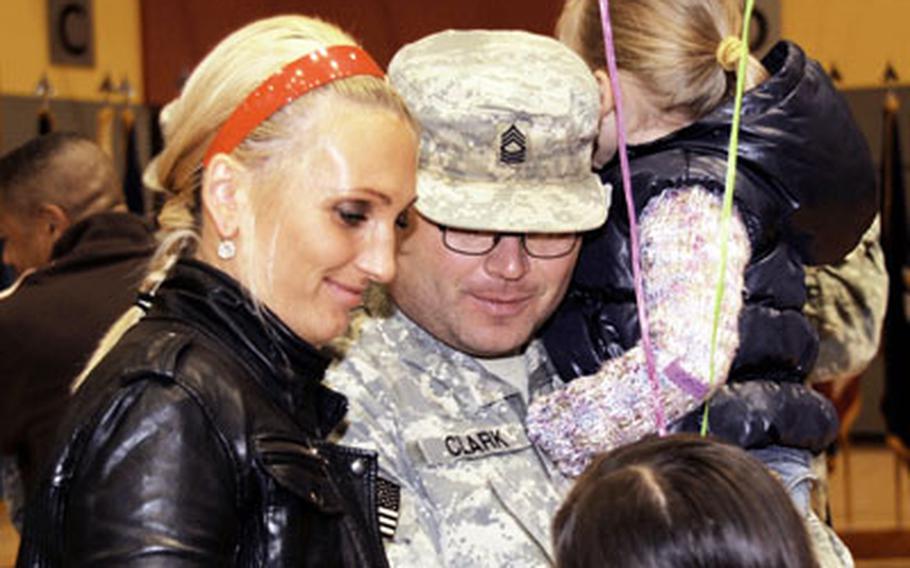 Master Sgt. David Clark of Headquarters and Headquarters Company, 16th Sustainment Brigade greets his wife, Olga, and daughters, Sofia, 3, right, and Liza, 8, at a welcome home ceremony Sunday morning on Warner Barracks in Bamberg, Germany. The 16th Sustainment Brigade was deployed for 15 months to Iraq and was the last Army unit to serve a 15-month tour there. Shortly after the unit arrived in Iraq, deployment lengths were shortened to 12 months. (Fay Conroy/Courtesy of the U.S. Army)

Days after they arrived in Iraq, the Defense Department announced that all future Army deployments would be cut to 12 months, meaning the 16th brigade&#8217;s soldiers would be among the last who had to spend more than a year in the desert, brigade officials said.

"It was a bunch of B.S., but what can we do about it now?" said Sgt. Nikifor Banchoff, who returned on Sunday and was conducting a post-deployment health examination Tuesday in Bamberg. "We had a mission we had to accomplish, and it was annoying seeing units come and go while being deployed with units only serving 12 months after they arrived," he said.

On Sunday morning, 169 soldiers returned to their families and friends on the base in Bamberg. A week earlier, 161 soldiers from the unit returned home.

The brigade, based at Qayyarah Airfield, known as Q-West, was responsible for delivering tons of supplies to soldiers based in northern Iraq. The brigade headquarters, about 190 miles north of Baghdad, supported 15 battalions, according to brigade commander Col. Martin Pitts, who wrote about the unit&#8217;s accomplishments in a letter to families before the unit returned home.

None of the soldiers from the headquarters unit lost their lives during the deployment.

The brigade completed 6,000 convoy logistical patrols, driving more than 6 million miles to ensure all the soldiers in Multi-National Division-North got the supplies and equipment they needed, Pitts said.