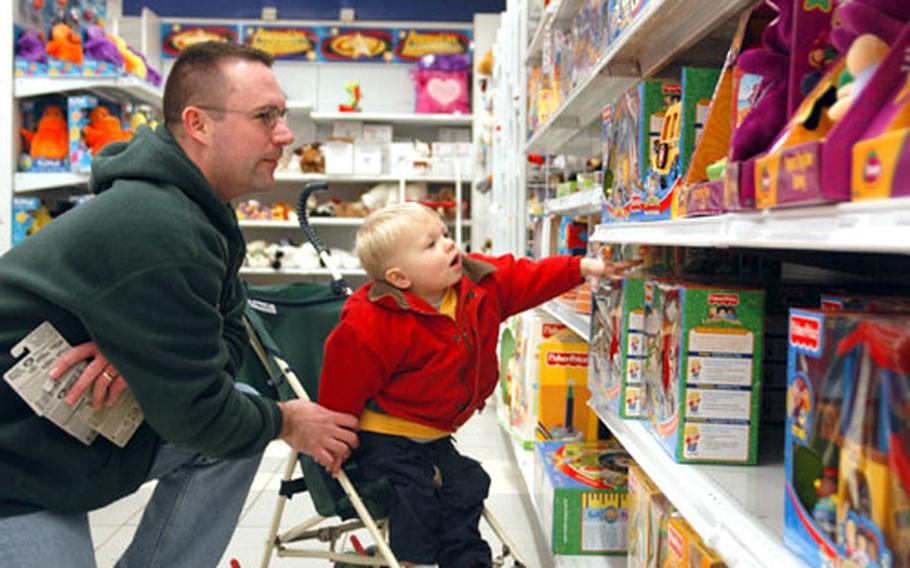 John Crowe, of Rhein-Main Air Base, Germany, looks over the shelves of toys with 21-month-old son John Crowe Jr. at the Toyland at Mainz-Kastel Storage Station in Germany. (Ben Murray / S&S)

John Crowe, of Rhein-Main Air Base, Germany, looks over the shelves of toys with 21-month-old son John Crowe Jr. at the Toyland at Mainz-Kastel Storage Station in Germany. (Ben Murray / S&S) 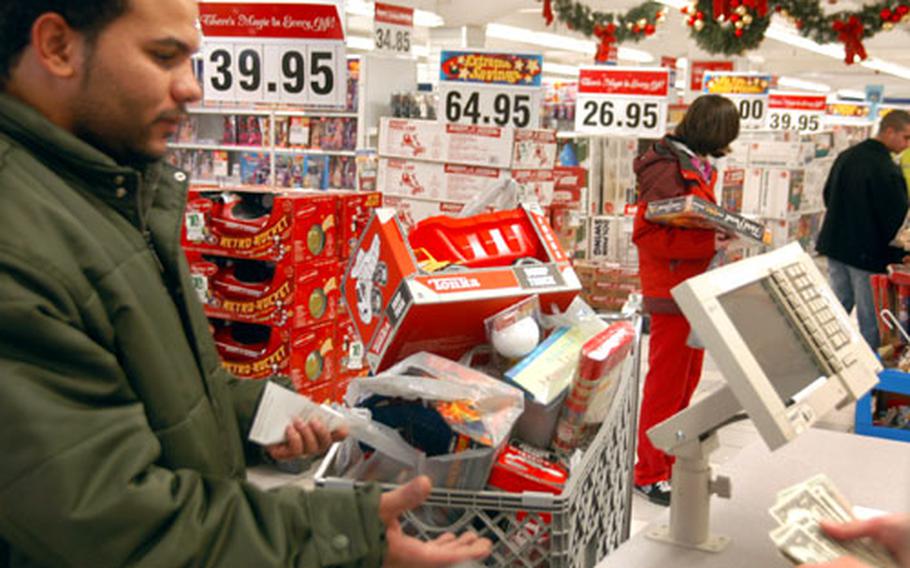 Bobby Love pays for his cartload of Christmas gifts Tuesday at the Toyland at Mainz-Kastel Storage Station, Germany. Love said his wife, who is deployed, instructed him to do the Christmas shopping a month ago, but he waited until the last minute to do it. (Ben Murray / S&S)

NAPLES, Italy &#8212; Peter Foulkrod scoured the aisles of the Navy Exchange at Agnano on Tuesday, looking for the perfect gift for mom.

To help accomplish the goal, mom tagged along for last-minute shoppers Peter and dad, Petty Officer 1st Class David Foulkrod, to help point out the various things that just might make mom happy in four days.

&#8220;There are clothes and jewelry and perfume and leather, and fur, of course,&#8221; Anna Foulkrod said. They shopped with ease, as there were no frenzied last-minute shoppers pounding the NEX aisles or swarming the cash registers.

The Internet played heavily for Doug Schnyder this year, as his wife completed weeks ago all their holiday shopping via the computer.

It has proven to be a good holiday shopping season for the Army and Air Force Exchange Service in Europe, officials report.

Topping the toy wish list for AAFES&#8217; sales was the newcomers Bratz collection of plastic Barbie-like dolls that are hip to times in their low-waisted jeans, pumps and wedge shoes, funky eye makeup and voluptuous lips.

And the bright yellow under-water-living sponge cartoon character SpongeBob SquarePants has been successful in every category, from toys to accessories, clothing, linens and more, Mackey said.

&#8220;Oversized plush bears and stuffed animals have performed surprisingly well, and [AAFES officials] can attribute some of that to returning [troops who were deployed] wanting to treat their wives, girlfriends and children,&#8221; she said.

The weaker dollar on the economy sent some shoppers to the military exchanges.

Thomas Liebchen, a German military supply clerk stationed at the NATO base in Naples, and his wife, Barbara, eyed a traditional holiday nutcracker at the Navy Exchange as one of their last-minute knickknacks instead of shopping for it elsewhere. In fact, the German-husband and Canadian-wife duo liked one so much, they planned to keep it for themselves.

Overall, Army and Air Force Exchange Service Christmas sales in Europe are running about 4 percent ahead of sales projections this year. Here are some of the most popular gift items: