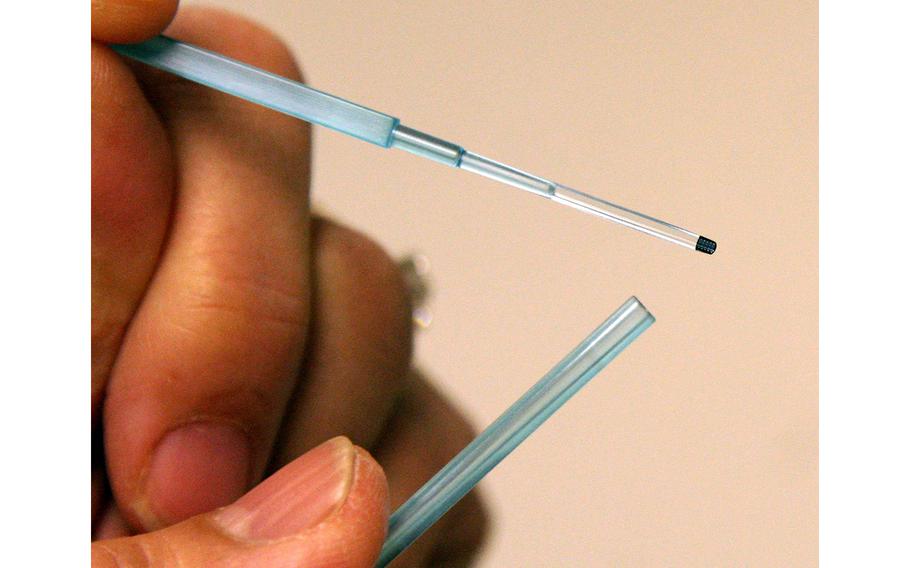 The freezing platform for an embryo, top, also known as a straw, in the in vitro fertilization lab at the Reproductive Science Center in San Ramon, California, on Aug. 22, 2013. (Jim Stevens/Bay Area News Group/MCT)

WASHINGTON — Congress was poised Thursday to lift a 24-year ban on wounded veterans receiving fertility treatment through the Department of Veterans Affairs following a landmark agreement between the House and Senate.

But repeal of the ban, which would be a hard-fought victory for thousands of veterans hoping to start families, was still in danger of fizzling during a final Senate vote due to political wrangling over an attached plan to fight the Zika virus.

Lawmakers from both chambers agreed to a final VA budget bill for 2017 that lifts restrictions on in vitro fertilization – the culmination of years of work by advocates in Congress. The treatment is provided to troops by the Defense Department but was banned in 1992 at the VA due to concerns among conservatives over discarded embryos.

Now, even supporters of the measure might vote against the final agreement in the Senate due to what they consider are “poison pill” riders attached to the budget bill at the last moment. The House gave its final approval Wednesday.

“I will not support the Republican Zika-Military Construction-VA conference report that limits needed birth control services for women in the United States and Puerto Rico, and includes a troubling pesticides policy rider that endangers clean water protections,” said Sen. Barbara Mikulski, D-Md., who has been a backer of IVF for veterans.

Sen. Patty Murray, D-Wash., has been a leading advocate for veteran access to the fertility treatment and spent the past three years trying to repeal the ban. She said she was encouraged that the repeal was included but also appalled by the attempt to cut Planned Parenthood contraception funding.

“There are some provisions Republicans included that I need to look into, but at the end of the day, the most important thing is that this provision seems to give veterans the care they deserve in their service to our country,” Murray said in a written statement to Stars and Stripes.

The senator indicated she might also vote against the larger bill due to the attached legislation.

“Unfortunately, Republicans have chosen to pick a partisan fight on the overall bill that includes Zika funding — but I am going to keep working to get this done one way or another,” Murray said.

The White House slammed the budget agreement for playing “political games” by cutting money from programs that supply birth control as part of the plans to combat the new illness, which is spread by mosquitoes and is spreading to the United States. It has been linked to severe birth defects in babies.

Meanwhile, Republicans pushed ahead with the VA budget bill as the Senate considered whether to schedule a final vote before the long summer recess begins in mid-July.

“We’ve negotiated a conference agreement that will provide additional resources to fight the public health threat of the Zika virus,” said Sen. Thad Cochran, R-Miss., chairman of the Appropriations Committee. “I am pleased that the Zika package will be considered along with important funding for veterans and defense facilities.”

Cochran said the final agreement includes language on in vitro fertilization that prevents three-parent embryos – or eggs fertilized by more than one sperm — and human cloning, which was likely added to allay concerns among conservatives. The bill also allows funding to be used for child adoption services.

“This funding bill will curb the spread of Zika and protect Americans from this dangerous virus,” McCarthy said in a release. “This legislation will also hold the VA accountable and institute reforms that House Republicans have long called for so our veterans can finally get the quality care they have been waiting for.”

In vitro fertilization, which seeks to fertilize eggs outside the body, is a common treatment for couples who have difficulty conceiving. Criticism of the VA ban’s fairness have grown louder in recent years as troops returned home from Iraq and Afghanistan with severe injuries from improvised explosive devices that left them unable to conceive.

Advocates estimate several thousand veterans suffered injuries that keep them from starting families. They are now forced to seek treatment outside of the VA system and foot the bill for IVF, which can cost about $10,000 for a single round of treatment.

Groups such as the Veterans of Foreign Wars, which represents about 1.7 million veterans, and Paralyzed Veterans of America have pressed Congress for a repeal.