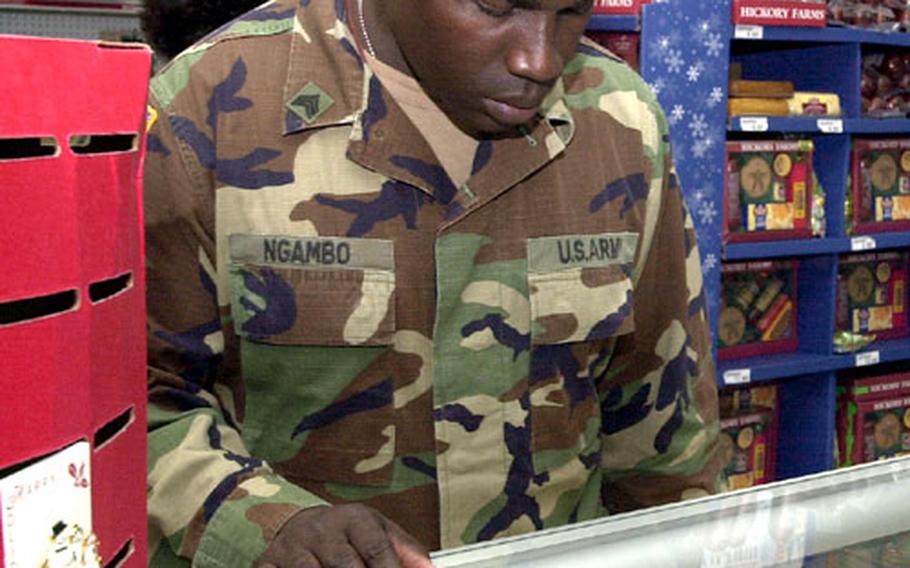 Army Sgt. Pierre Ngambo of the 58th Signal Battalion looks for jewelry as a last-minute Christmas gift for his wife Thursday morning at the Camp Foster Exchange on Okinawa. He said he always waits until the last minute to buy gifts so he can get the best deal possible. (Fred Zimmerman / S&S)

Army Sgt. Pierre Ngambo of the 58th Signal Battalion looks for jewelry as a last-minute Christmas gift for his wife Thursday morning at the Camp Foster Exchange on Okinawa. He said he always waits until the last minute to buy gifts so he can get the best deal possible. (Fred Zimmerman / S&S) 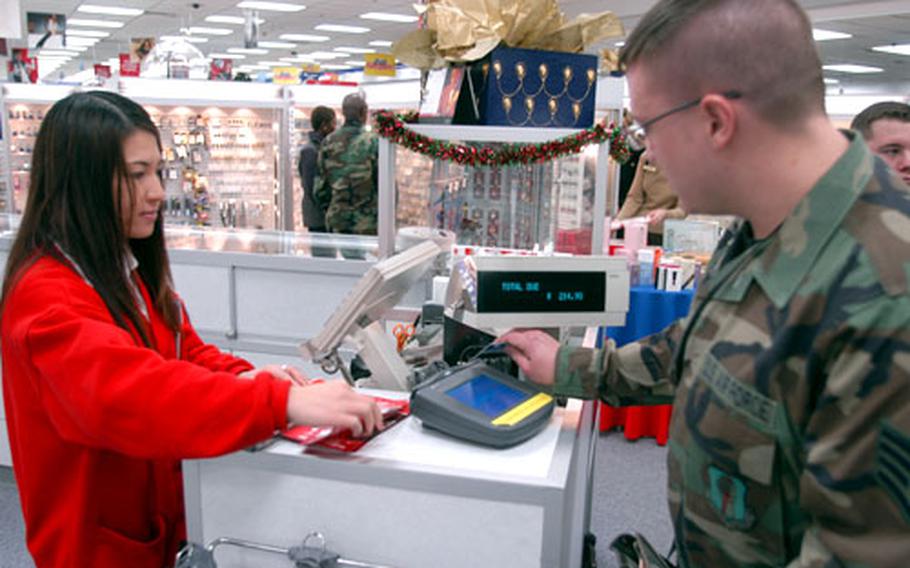 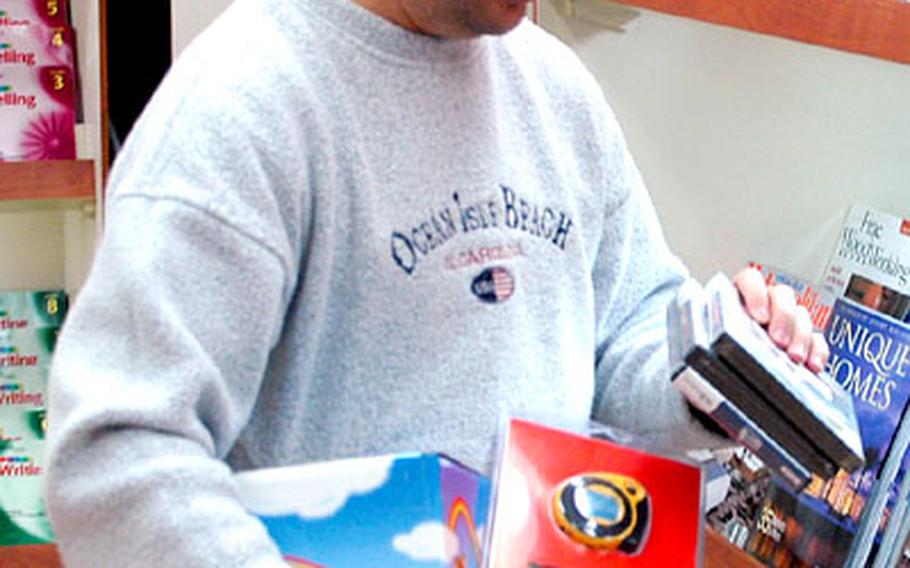 Petty Officer 1st Class Billy Reynolds said he realized at the last minute that he still had some shopping to do for one of his children, so he visited the Navy Exchange at Sasebo Naval Base, Japan, in search of video games, magazines and other gifts on Thursday afternoon. (Greg Tyler / S&S) 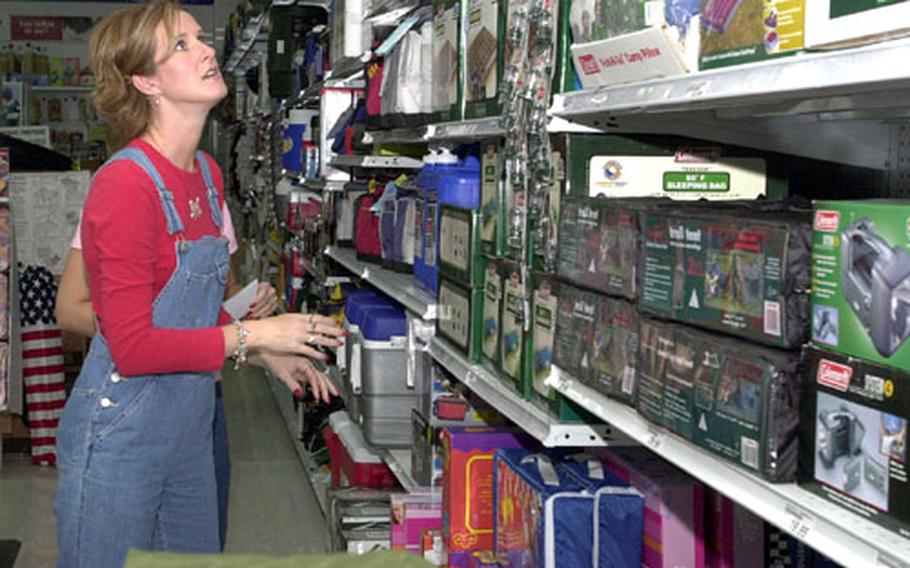 MISAWA AIR BASE, Japan &#8212; Staff Sgt. Rod Parker walked out of the base exchange Thursday afternoon with two shopping bags, toting clothes and a Nike winter coat for his sons.

But with Christmas Day fast approaching, he still had a television to buy for his children and something for his wife, though he had no idea what.

With less than two shopping days to spare, customers thronged to base stores across the Pacific on Thursday in pursuit of last-minute holiday gifts. In mainland Japan, Okinawa, and South Korea, shoppers bought up Xbox video games and SpongeBob DVDs, watches and diamond rings, Christmas decorations and a steam cleaner, to name some items. They offered an array of excuses for waiting so long to finish off their lists: deployments, busy work schedules, habit, indecisiveness, laziness and the element of surprise.

&#8220;Less time for my children to find them in the house,&#8221; said Navy Lt. Cmdr. James Brown, while getting Christmas gifts wrapped at Osan Air Base, South Korea.

Some parents who thought they were done for the year headed to the stores Thursday with a big heart, deciding their kids really needed one more item or two under the tree or in their stocking.

&#8220;You know, after you put the stockings together, you think &#8216;I can put one more thing in there,&#8217;&#8221; said Misawa civilian Kevin Radford, after buying video games, CDs and other stocking stuffers for his three boys.

Likewise, at Japan&#8217;s Sasebo Naval Base Navy Exchange, Petty Officer 1st Class Billy Reynolds was hoping to find some tips on good video games to buy for one of his children.

&#8220;Well, I thought I had done pretty good buying gifts, but then I started wrapping and putting presents under the tree for my three children when I noticed one of them was coming up a little short,&#8221; Reynolds said.

He is excited to give one of his children a new handheld gaming system, Nintendo DS, that was recently released &#8212; they simply flew off the shelves in the NEX before he found time to buy one, he said.

Seaman Nelly Salazar, who bought most of her gifts before Thursday, planned some last-minute shopping.

Store officials at Misawa expected sales to pick up the day before Christmas, said operations manager Brian Benson, noting the store was open 12 hours a day throughout much of December and was to open two hours early at 7 a.m. Friday. This time of year, the jewelry counter and electronics tend to be the busiest departments, he said.

&#8220;Men always look at electronics, computers and TVs and then they get pulled over to the jewelry counter for their wives &#8212; the seasoned husbands&#8221; that is.

Some shoppers said this year they shopped only on base or online and avoided downtown stores because of the poor U.S. dollar to Japanese yen exchange rate. Others said it was the only show in town.

&#8220;Being overseas it&#8217;s tough because the shopping is limited,&#8221; said Osan Air Base civilian contractor Mike Millspaugh, because it&#8217;s only on base that he can expect to find the American products he wants.

Millspaugh, a single parent who works for the 7th Air Force, was at the base exchange with his shopping cart filled to overflowing with last-minute Christmas gifts for his three young children.

While many patrons left stores Thursday proclaiming they were done Christmas shopping, Parker, the Misawa staff sergeant, made it as far as the food court with clothes for his kids before turning around.

How long would he shop?