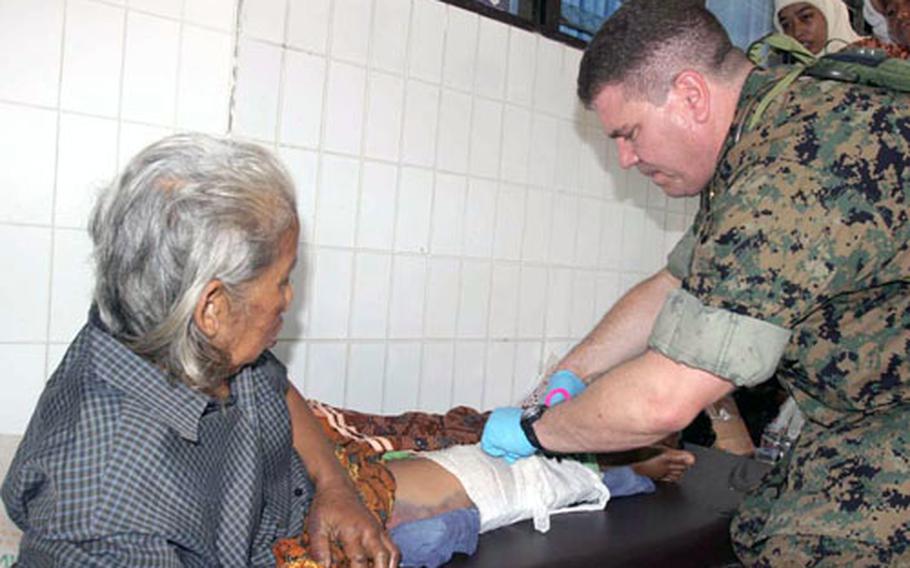 Lt. Cmdr. Carlos Godinez applies a makeshift splint to the broken leg of Sudi Utomo on Wednesday in Bantul, Indonesia. Utomo received the injury when a wooden beam fell on her during the May 27 earthquake. Godinez is a III Marine Expeditionary Force surgeon. (Warren Peace / U.S. Marine Corps)

Meanwhile, the Sasebo-based USS Essex group and accompanying Marines from Okinawa continued their return to Japan after having waited in the area in case they were called to assist. The group had been on its way home from the exercise Cobra Gold in Thailand when the earthquake hit. Indonesia did not ask for the group&#8217;s help, so it was free to continue home, said Lt. Cmdr. Jason Salata, a PACOM spokesman.

A 6.3-magnitude earthquake May 27 on Java island killed more than 6,000 and left thousands homeless. In response, the U.S. State Department pledged $5 million and troops if requested by Indonesia to help, according to a statement from the United States Agency for International Development.

Friday the last 20 of about 100 troops requested by Indonesia arrived on Java, Salata said. Indonesia had requested medical, logistics and engineering assistance.

So far, medical personnel from the III Marine Expeditionary Force on Okinawa have set up a small hospital in the area. On Thursday, they performed six surgeries and provided care to about 125 acute and primary care patients, PACOM reported.

&#8220;The physicians here are doing an excellent job,&#8221; Lt. Cmdr. Carlos D. Godinez, a III MEF surgeon, was quoted in the release as saying. &#8220;The biggest problem the Indonesian hospitals are having is an overflow of patients. I expected orthopedic injuries, but not of this severity. It&#8217;s almost overwhelming.&#8221;

Four doctors with specific medical skills from the U.S. hospital ship USNS Mercy also have gone to Indonesia, but the ship&#8217;s current deployment to the southern Philippines and South Asia has not been altered, Salata said.

In addition to medical support, several Pacific Air Forces engineers are in the region to assess damage, including to runways. Army Corps of Engineers personnel from the Pacific Ocean Division in Honolulu as well as additional medical personnel are waiting at staging areas to assist if called upon by Indonesian authorities, Salata said.

On Thursday, about 85 airmen deployed from Yokota and Misawa air bases, operating out of a base in Singapore, completed their first mission &#8212; carrying a forklift and crew by C-130 to Indonesia. Two Yokota C-130s will ferry supplies from the staging area at Singapore to Indonesia.

A small crew of Air Force personnel will remain on the ground to offload supplies in the country, said spokesman Capt. Warren Comer.

&#8220;We&#8217;re taking the most important stuff first,&#8221; Maj. Timothy Thurston, navigator on the first C-130, was quoted as saying. &#8220;Taking a forklift and some combat mobility element airmen to Indonesia is exactly what we need to do to get our overall relief efforts under way.&#8221;