LaSalle in Malta for upgrades 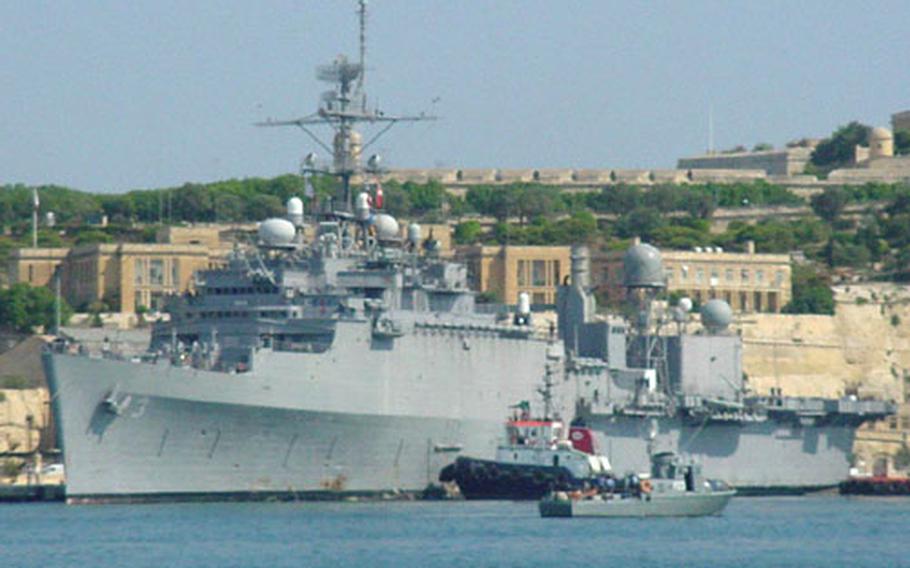 A tugboat helps ease the USS La Salle into the docking area in LaValetta, Malta, last week, where it is scheduled for repairs. (Courtesy of U.S. Navy)

The Gaeta, Italy-based USS La Salle arrived in Malta last week for a three-month maintenance and upgrade. The $7.7 million project will include major propulsion plant work, crew living upgrades and the installation of a new NATO planning and conference center.

La Salle is the 6th Fleet flagship and carries a crew of more than 550.

The project officer, Lt. Cmdr. Quinten King of the Ship Repair Unit in Naples, Italy, said Malta Drydocks was one of six European shipyards bidding for the job.

Petty Officer 1st Class John Shattuck, a machinery repairman on La Salle, was on board for the last Malta yard period.

Crews will be working on a number of major shipboard systems, King said, including boilers and pumps in the ship&#8217;s propulsion plant; steam piping for heating, showers and cooking, as well as the renovation of 13 berthing compartments. The work will force the crew to live off the ship the majority of the time.

In addition to the maintenance and upkeep, Malta crews will build a NATO planning and conference center in the 6th Fleet staff area.

When the 2001 contract was announced, some Maltese expressed concern.

Malta&#8217;s General Workers&#8217; Union, the largest trade union on the island, stated that its members would not work on a warship over questions of Malta&#8217;s constitutional neutrality.

Maltese Prime Minister Eddie Fenech Adami threatened to cut all state aid to the shipyard unless union members did the job. The union backed down, stating it would not back out of a contract, and the work was started on time.

Many of the original concerns haven&#8217;t yet been resolved, but the union didn&#8217;t have any issues with the contract.

A small minority of Maltese still have concerns.

&#8220;The U.S. military has been the major concern for warships visiting or receiving work in Malta,&#8221; explained Chris Mizzi of the Maltese peace group Moviment Graffitti in an e-mail last week. &#8220;In fact, people have the same concern about other warships, too. The focus is on the U.S. warships because six out of 10 warships [visiting Malta] are U.S.&#8221;

La Salle is expected to be in Malta until mid-September.