Largest gun control organization in US looks to veterans for support, advice 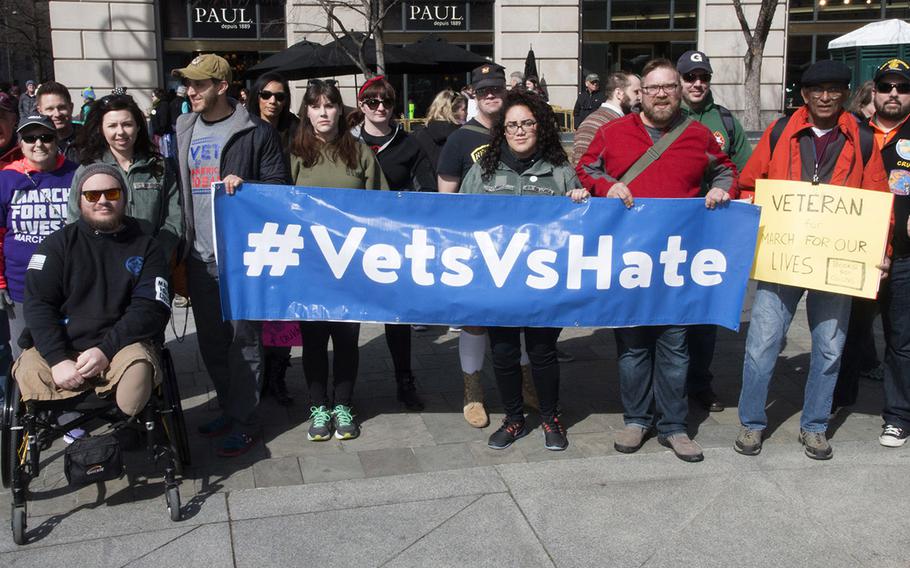 Buy Photo
Veterans pose for a photo at the March for Our Lives in Washington, D.C. on March 24, 2018. Military veterans have joined up with Everytown for Gun Safety, the country’s largest gun control advocacy organization, to form a veterans advisory council. ( Joe Gromelski/Stars and Stripes)

WASHINGTON — Since the mass killing at Marjory Stoneman Douglas High School in Parkland, Fla., more veterans are bucking their pro-gun stereotype and calling for gun reform, citing their combat experience and firearm expertise as reasons why their opinions should carry weight.

The movement spread in February from veterans posting on Twitter and writing commentaries in major news publications to a loose coalition formed under the title Vets for Gun Reform. When more than one million people across the country rallied against gun violence at the March for Our Lives this spring, some veterans grouped together to join the protests.

“We know how critical firearm safety and responsibility are, and we know what these weapons can do in the wrong hands,” said Navy veteran Sarah Dachos, who’s been involved in gun control advocacy for the past three years.

Anthony Swofford, a Marine Corps veteran and author of the 2003 memoir Jarhead, also got behind the push for gun reform.

“In the Marine Corps, we have an expression, ‘Every Marine a rifleman,’” he said. “We’re made to understand the impact these weapons have and the responsibility that comes with handling them. I think the civilian world could learn some important lessons from that military experience of training, safety and accountability -- that’s part of the reason I felt compelled to lend my voice to this work.”

Now, Swofford, Dachos and other veterans have secured a platform in the national debate on gun reform. Everytown for Gun Safety, the country’s largest gun control advocacy organization, announced Wednesday that it created a veterans advisory council to lend support and advice.

“We really, truly believe that veterans have a unique voice and a very important and powerful voice to lend to the movement to end gun violence,” said Matt McTighe, chief operating officer of Everytown. “We wanted to try to help elevate their voices and give them a platform.”

Part of the function of the veterans advisory council will be to provide testimony to Congress, weigh in on policy proposals and offer insight on firearms. For example, Everytown sought veterans’ advice in October when the nation’s attention turned to bump stocks after they were used in the deadly shooting at the Route 91 Harvest Festival in Las Vegas, McTighe said.

To start, 20 veterans will be part of the advisory council. One of them, Marine Corps veteran Alonzo Neese, resigned his membership to the National Rifle Association this week.

“Recently, I looked to the NRA for leadership,” Neese said. “But what I heard from NRA leaders… instead of promoting solutions to gun violence, they drew greater divisions.”

McTighe asserted the NRA was attempting to “claim a monopoly on the voices of veterans.” Veterans regularly appear in NRA advertisements and the organization’s television platform, NRATV, proclaiming gun control efforts as anti-military.

It’s unclear how many of the NRA’s approximately five million members are veterans. The organization doesn’t ask for that information on its membership forms.

The veterans advisory council is also an attempt to get more gun owners involved with brainstorming solutions to combat gun violence, McTighe said.

Scott Cooper, a retired Marine involved with the group Human Rights First, is part of the advisory council. Cooper grew up in Wyoming, where he started hunting at 14, he said.

“I think there’s a way we can have a conversation that doesn’t divide us into one camp or another,” he said. “I’m hoping, as veterans, we can use this platform to set an example of unity, compromise and putting the mission first.”