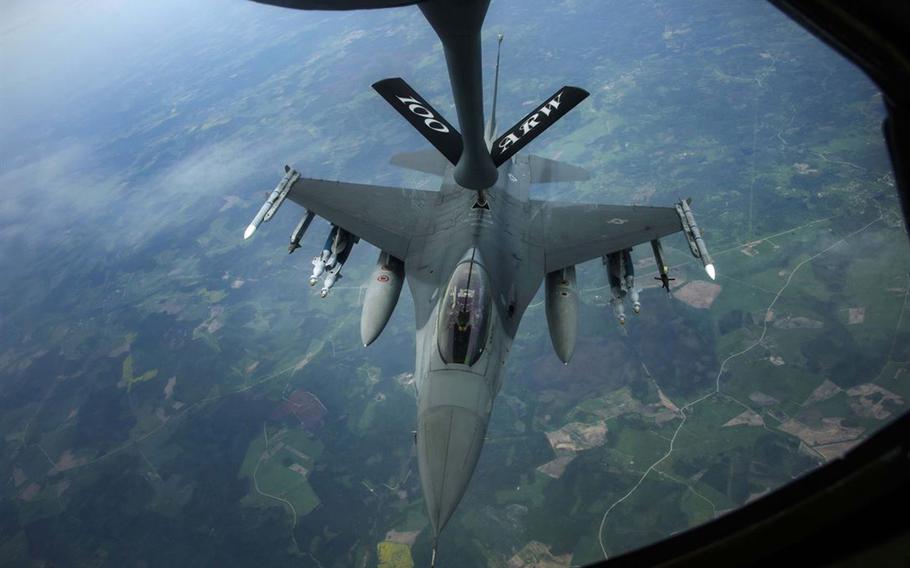 An F-16 Fighting Falcon aircraft refuels from a KC-135R Stratotanker on June 7, 2017, over Latvia during BALTOPS, a U.S.-led exercise designed to help nations work together to better protect the Baltic region. (Jonathan Snyder/U.S. Air Force)

NATO warships, fighters and submarines cruising over and under the Baltic Sea will conclude a major U.S.-led maritime exercise Friday, with allies training in the defense of small coastal nations nervous in the shadow of Russia.

The Baltic Operations exercise, or BALTOPS, featured 55 aircraft, 50 ships and submarines combined, and about 4,000 personnel doing simulated attacks and defense in and around the Baltic Sea.

Rear Adm. Christopher Grady, 6th Fleet commander and head of NATO’s naval striking and support forces, declined to name Russia as the adversary in mind while allies simulated a range of combat scenarios. He said the exercise was a concerted effort to defend against all possible threats.

“It allows us to demonstrate our resolve and commitment to each other and to defend the sovereignty of the (Baltic) nations,” Grady said. “When we come together, we learn from each other,” he said in a telephone interview.

Yet the drills come as the West’s relations with Russia continue to fester and Moscow moves forward with a military buildup in the nearby enclave of Kaliningrad, which would pose a challenge to allies in any Baltic fight.

The two-week exercise has grown in scope and the training methods have changed over the decades. The purpose of the exercise — the collective defense of allies — remains the same since it began during the height of the Cold War in 1972.

NATO’s show of force in Russia’s backyard should send a message of resolve to Russian leaders, said Jim Holmes, professor of strategy at the Naval War College.

“We’re showing that we can operate in the Baltic Sea in force, and trying to convince Moscow it can’t stop us,” Holmes said. “If the Russians are convinced they would lose in wartime, chances are they won’t push us too far in peacetime.”

It’s also important to assure allies that America will continue to protect them, Holmes said. Otherwise, they may defect from the alliance and possibly align with an enemy, causing America to lose its strategic edge in northern Europe, he said.

The amount of hardware and personnel is less important, Grady said, than getting it all to work together. This year, more emphasis was placed on linking nations’ planes to ships during sea missions, which is paramount for an allied force to be effective, he said.

BALTOPS’ had both scripted and “free play” simulations at sea. The scripted events are tightly planned with a set start and stop time. In free play, the events are allowed to unfold, testing the teams’ ability to react effectively to unforeseen situations such as an intruder suddenly entering an area.

“This year we have had a more robust and challenging free play part of the exercise,” Grady said.

One of the most dynamic simulations was the amphibious beach landing in Latvia. The USS Arlington launched teams of Marines who joined other countries’ forces for a mock invasion.

Yearly exercises like BALTOPS are crucial in creating a unified force that can protect the Baltic not only against military threats but those who would threaten the region’s vital shipping trade, Grady said.

“If we’re going to achieve the ability to fight alongside our partners, it takes practice,” Grady said.