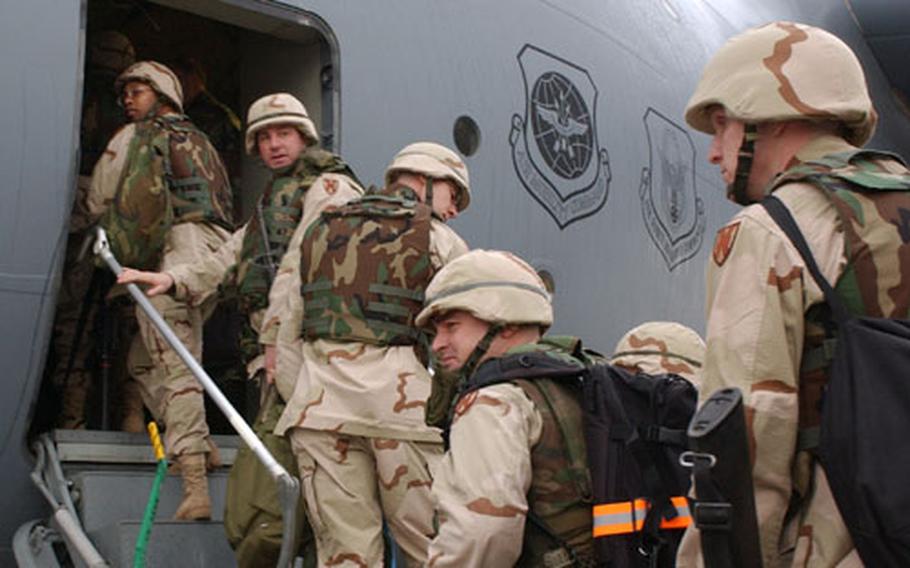 Soldiers board a C-17 at Ramstein Air Base, Germany, on Friday bound for Operation Iraqi Freedom. (Courtesy of U.S. Army)

In what is being billed as the largest military movement since World War II, the United States has started launching the lead units for the first complete turnover of forces in Iraq.

Leading the effort are hundreds of Germany-based 21st Theater Support Command logisticians who will help pave the way for more than 100,000 fresh troops who are slated to take over occupation duties in Iraq over the next five months.

&#8220;These are the very first units in Europe to leave for OIF 2, and they are among the first for the entire Army,&#8221; said 21st TSC spokesman Maj. Mark Wright as the first 600 troops &#8212; mostly from supply, maintenance and transportation units &#8212; began loading aboard military transport aircraft at Ramstein Air Base late Thursday night.

The 21-year-old from Reno, Nev., will help manage convoys of heavy gear and equipment now on the way from European- and U.S.-based units. Most of the gear will arrive in Kuwait to make the long journey across Iraq&#8217;s dangerous desert highways.

Units will also be on the move in Afghanistan in the coming months. The 25th Infantry Division, augmented by a contingent of Marines, is slated to take over the hunt for Taliban and al-Qaida holdouts there from the 10th Mountain Division in April.

Among the units swapping out in Iraq:

&#8226; 1st Marine Division, augmented by a brigade of the 25th Infantry Division (Light), will replace the 82nd Airborne Division in Fallujah and the 3rd Armored Cavalry Regiment along Iraq&#8217;s western border.

&#8226; 1st Cavalry Division, augmented by a brigade of National Guardsmen, will be responsible for the Baghdad area now patrolled by the 1st Armored Division.

&#8226; III Corps will replace V Corps as the command nucleolus for forces in Iraq at the coalition headquarters in Baghdad.

Those forces will arrive inside a still very volatile Iraq.

Over the past week alone there has been an average of 18 attacks against military units every day, Army Brig. Gen. Mark Kimmitt told reporters Thursday in Baghdad. That&#8217;s the same day a UH-60 Black Hawk helicopter is believed to have been shot down by a rocket, killing all nine soldiers aboard.

The biggest concern during the transfer of authority, Kimmitt told Stars and Stripes, is &#8220;maintaining the pace of offensive combat operations and maintaining the momentum. We&#8217;ve got to keep rebuilding, we&#8217;ve got to keep offensive operations going and keep the pressure on the enemy, while at the same time rotating 250,000 soldiers.&#8221;

&#8220;Our focus right now is on ensuring that the turnover happens as smoothly as possible,&#8221; added Lt. Col. Kevin Gainor, an Army spokesman in Iraq.

&#8220;We&#8217;re trying to insure the experience and knowledge from those units who have been here is passed on to units that are arriving,&#8221; he said.

In addition to stabilizing to 105,000 troops inside Iraq, Pentagon planners expect to have another 13,000 support troops, most based in Kuwait, for a total of 118,000 dedicated to Operation Iraqi Freedom, said Romley.

USAREUR units on the move

In the coming months, some 15,000 Europe-based soldiers will be deploying as part of the next rotation of forces into Iraq and other parts of the Middle East.

With V Corps and 1st Armored Division returning from Iraq, the force turnover will see about a third of the 60,000-strong U.S. Army Europe on the move between now and May.

According to Army spokesman Bob Purtiman, the following is a breakdown of the units on their way downrange and when they are slated to begin moving out: