LaPorte: ‘Stagnancy ... will cause problems’ 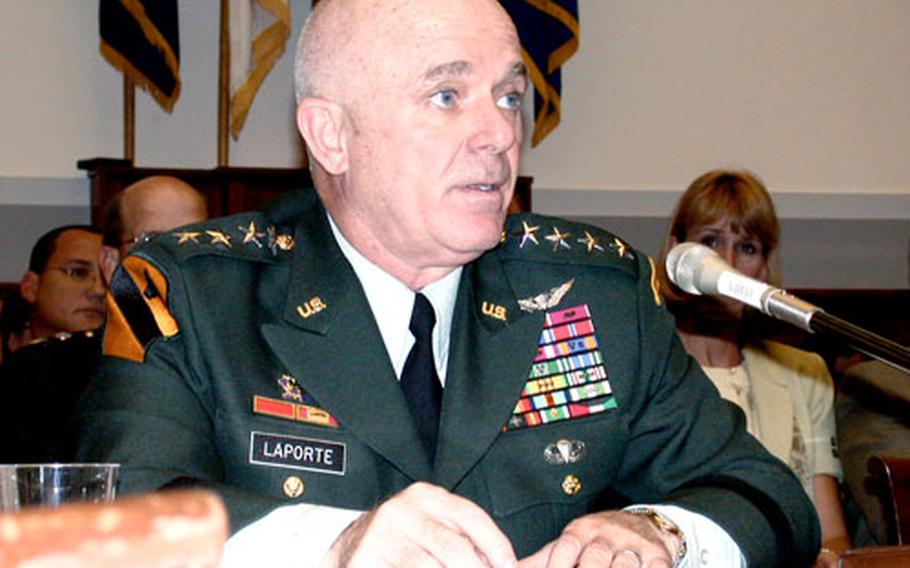 Gen. Leon J. LaPorte will step down as commander of U.S. Forces Korea, the Combined Forces Command and the United Nations Command on Feb. 3 as Gen. Burwell B. Bell becomes the top American military official in South Korea.

Stars and Stripes met with LaPorte on Thursday to discuss the U.S.-South Korea relationship, USFK&#8217;s campaign against prostitution, troop curfews and the future for North Korea. The four-star general also talked about the next step in his career and his thoughts as he retires after nearly 38 years in the military. Following are excerpts from the interview:

Q: Many Korea experts say the alliance has encountered some of its greatest challenges during your tenure. As both militaries evolve, as politics evolve in both countries, the alliance itself has had to struggle to redefine itself and to think about where it about may go in the future. How do you feel about that analysis?

A: Clearly, in my mind&#8217;s eye, 1950 to 1953 (during the Korean War) was the most taxing time for the alliance, when people were dying and people were shooting each other.

In the past four years, except for one incident in the West Sea where we lost six of our brave (South Korean) sailors, we&#8217;ve experienced a period of relative calm in terms of peace and security on the Korean peninsula. So that really gives you an indication of how successful we have been in our deterrence efforts.

I tell people, it is not the Demilitarized Zone &#8212; that strip of dirt that&#8217;s probably the most heavily fortified and guarded piece of land in the world &#8212; it&#8217;s not that that keeps North Korea from coming south. It&#8217;s the clear understanding of the differential in combat capabilities between North Korea and the ROK-U.S. alliance.

What we don&#8217;t need to do is remain stagnant, because stagnancy in the 21st century will cause problems.

Q: Maureen Walsh, general counsel for the Helsinki Commission, has praised USFK and your actions to try to stem servicemember involvement in prostitution and human trafficking. Why is this issue so important to you and how do you think the military is doing in other parts of the world?

A: I will tell you that at the highest levels of the Defense Department, there&#8217;s great emphasis on the zero tolerance policy. And that&#8217;s evidenced by the policies that have been promulgated out of the Defense Department, the recent changes to the (Uniform Code of Military Justice) where it made prostitution a UCMJ violation, specifically.

In terms of USFK, we view prostitution as a form of slavery. And, clearly, human trafficking is slavery. And our nation&#8217;s experience with slavery teaches us a lot. So this is a very, very important issue for the command, and the command has spent a great deal of time and energy on this, educating our servicemembers on the real nature, the real evil associated with prostitution &#8212; that so many of these young women and boys are forced into this type of life. And we know that that is wrong.

We have put over 600 facilities or establishments off-limits. Why? Because we had clear evidence that they were involved in prostitution. We have a curfew and the curfew, in our mind, is appropriate. All of us in the military are here for a purpose, and that purpose requires us to be vigilant and ready.

The other aspect of this is &#8212; it&#8217;s fostering an attitude relative to women. Women fill all the ranks in our military. And we have to be consistent in our message relative to women, whether they wear a uniform or not. The command is not going to look one way while its male servicemembers go downtown and treat women a certain way, and then expect them to treat the women officers, the women noncommissioned officers and the women servicemembers differently when they come back on post. That doesn&#8217;t work. So prostitution and human trafficking, in my mind, undermines the chain of command and the role that women play in the U.S. military. And that&#8217;s not going to be tolerated.

Q: What do you think lies in North Korea&#8217;s future, and how might that affect the world and the U.S.-South Korea alliance?

A: I don&#8217;t think anyone knows what the future of North Korea will be. I know what it could be, if North Korea would open itself up and take positive steps to not alienate the nations that it&#8217;s associated with. If it would dismantle its nuclear capabilities, I believe there are many, many nations that would line up to provide aid and assistance to the North Korean people and help that government turn itself around.

The United States military has been reduced. The South Korean military is reducing its forces, but North Korea hasn&#8217;t reduced any of its forces. It could do that, and the money it would save could be used to improve the quality of life and the conditions the North Korea people have to endure on a daily basis. But that&#8217;s their (leadership&#8217;s) decision to make.

Q: What are your plans for the future?

A: Well, in the short term, I&#8217;m going to move to San Antonio, Texas, and I&#8217;m going to spend a great deal of time with my family, my boys and my daughters-in-law, and my grandchildren. And Judy (my wife) and I are going to relax for a period of time. We&#8217;ve made no plans beyond going home and spending some time with our family.

Q: What about your thoughts on your career?

A: If I had to live my life over again and I could only make two choices, I would marry the same woman and I&#8217;d become a soldier.

I&#8217;ve seen the military change tremendously, from a military that was in disarray following the Vietnam War to a military that is the pride of the nation. And there&#8217;s no military better. Our young men and women who wear the uniform do so much and ask so very, very little. So, I&#8217;ve been very fortunate for 38 years to each and every day be associated with these men and women. And I wouldn&#8217;t give that up for the world.