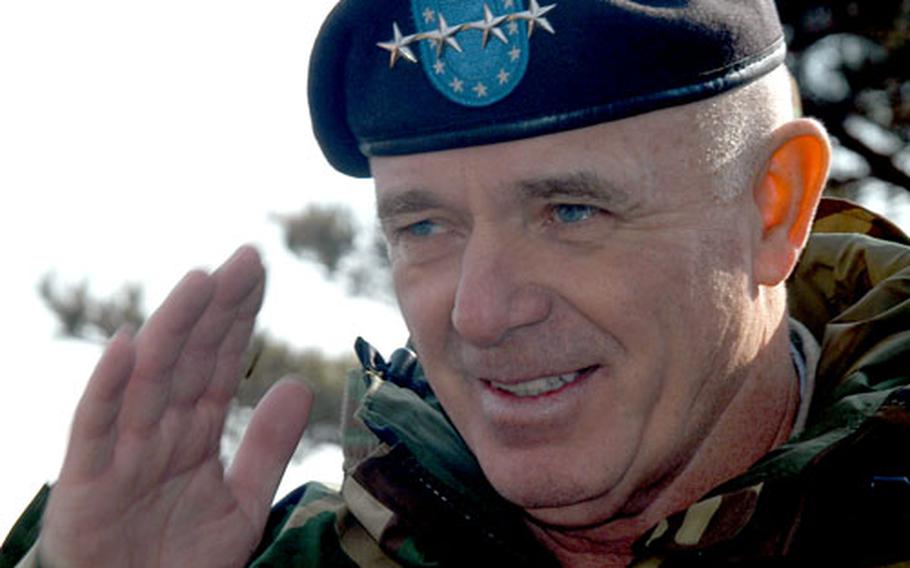 Gen. Leon J. LaPorte, commander of U.S. Forces Korea, has been one of the longest-serving U.S. commanders in South Korea. He will leave Feb. 3, to be replaced by Gen. B.B. Bell. (Teri Weaver / S&S)

SEOUL &#8212; In the summer and fall of 2002, many residents and military experts here worried that the alliance between South Korea and the U.S. was beginning to unravel.

The deaths of two teenage girls in a military vehicle accident had sparked violent protests against U.S. servicemembers. A younger generation of Koreans was coming to power, one that was enjoying a peacetime economy that would soon become the world&#8217;s 10th strongest. Both countries wanted to reshape &#8212; and shrink &#8212; the presence of U.S. troops on the peninsula without provoking North Korean aggression.

At the same time, South Korean political policies, pundits and even movie characters were beginning to depict their northern neighbors as sympathetic friends rather than as citizens of a nation on the world&#8217;s &#8220;axis of evil,&#8221; as President Bush declared in early 2002.

&#8220;People were saying that the alliance was going to come apart, that the issues were insurmountable,&#8221; Army Gen. Leon J. LaPorte, the longest-serving commander of U.S. Forces Korea, said last week. &#8220;Well, here we are today.

&#8220;The alliance has not come apart,&#8221; he said as he prepares to leave his commands in South Korea on Friday and retire from the military after nearly 38 years. &#8220;We have developed a transformation plan that is supportive of the Republic of Korea&#8217;s desires to have a more self-reliant military. We have agreed to the issue of strategic flexibility. We have agreed to enhancing our capabilities.&#8221;

Still, many point to LaPorte&#8217;s tenure here as a critical period in the alliance, unlike any point since the 1950-53 Korean War.

LaPorte took command of USFK, the Combined Forces Command and the United Nations Command on May 1, 2002. By October, the Korean Assembly had approved legislation that would shrink the U.S. military here by one-third, from 37,500 to 25,000, and move most of the U.S. bases scattered near the North Korean border to a centralized area south of Seoul.

In coming months, the U.S. would pledge $11 billion in high-tech aviation equipment and long-range missiles to supplement South Korean weaponry. In turn, the Koreans would prepare to take a larger role in their defense for the first time since the North&#8217;s 1950 invasion.

Part of these changes involved transferring 10 major military missions &#8212; some conducted during armistice time and some during war &#8212; from U.S. to South Korean oversight.

Seven have happened under LaPorte&#8217;s command, and he cites two as being &#8220;monumental&#8221;: the guarding of the Joint Security Area inside the Demilitarized Zone and the ability to destroy the North&#8217;s hidden missiles aimed directly at Seoul.

The U.S. and South Korea have had some disagreements over the years. Many public disputes have involved the American move south to Pyeongtaek, where the U.S. Army&#8217;s Camp Humphreys is expected to triple in size. That expansion, and planned reductions of Korean staff at other bases, has drawn the ire of thousands.

But reaction so far is sparse in comparison with the public outcry against Americans in 2002 when, even LaPorte&#8217;s supporters acknowledge, the general may have made a misstep.

Forty-four days into his command, two teenage girls were crushed by a 57-ton armored vehicle on a narrow road in Uijeongbu, about 15 miles north of Seoul.

The deaths quickly came to symbolize how little the Americans understood the country they were trying to protect, Korean analysts said this month. LaPorte and other USFK officials made repeated apologies, but they were denounced as late and insincere.

&#8220;It should have been handled more smartly,&#8221; said Assemblyman Yu Jae-gun, chairman of the Korean assembly&#8217;s Defense Committee, in a rare criticism of USFK under LaPorte.

Many, including Yu and Oberdorfer, say USFK has learned its lesson and responds more appropriately when tragedy occurs. Even President Bush made a statement right away about a Korean woman who was killed by an Army truck last summer, noted Kim Woo-sang, a professor of political science at Yonsei University in Seoul. &#8220;That&#8217;s a big difference,&#8221; he said.

LaPorte, for his part, often remembers the incident. He keeps a chronicle of all military-related deaths during his watch within reach. In his four years, 88 Korean servicemembers, 10 American servicemembers and three civilians have died.

Some said Koreans expected too much of LaPorte at the time.

&#8220;He is a military commander, not a diplomat,&#8221; said Kim Sung-han, a professor at the Institute of Foreign Affairs and National Security, a think tank for Korea&#8217;s Ministry of Defense.

&#8220;Whatever they say, the top American commander in Korea has functions which are not strictly military,&#8221; he said.

It&#8217;s a hard point to ignore, considering that LaPorte initiated a Good Neighbor Program shortly after the accident to promote more exchanges between Koreans and American servicemembers. The volunteer program encourages servicemembers to adopt orphanages and nursing homes, teach English and collect food and goods to distribute during Korean holidays.

It&#8217;s unlikely that many average Koreans know about the Good Neighbor Program, or even LaPorte&#8217;s name, many interviewed said. But they praised his efforts to reach out, noting there is now a USFK Web site in Korean for this Internet-driven country.

Nevertheless, some experts say they&#8217;re worried about the next key steps in the alliance after LaPorte leaves.

Such as, he and others ponder, what will change if the North Korea problem disappears?

Still others say they hope LaPorte will remain involved.

LaPorte said he has not decided the next step in his career. He and his wife, Judy, are moving to San Antonio, where their children and grandchildren live. In time, LaPorte said, he will consider &#8220;what opportunities present themselves.&#8221;

Hwang Hae-rym contributed to this article.