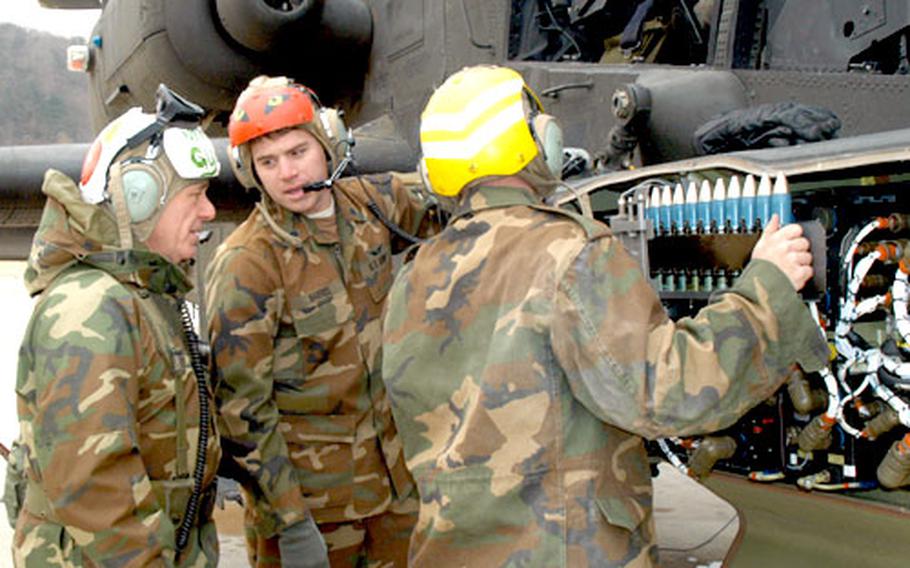 U.S. Forces Korea Commander Gen. Leon Laporte gets some pointers from Spc. Sean Harris, while Spc. Jesse Martin loads a chain of ammo into an Apache Longbow helicopter at Rodriguez Range on Monday. Company A of the 1st Battalion, 2nd Aviation Regiment was honored by LaPorte for four years of continuous flying without a serious accident. (Seth Robson / S&S)

RODRIGUEZ RANGE, South Korea &#8212; They do one of the Army&#8217;s most dangerous jobs, but in four years, Company A soldiers of the 1st Battalion, 2nd Aviation Regiment have not had a single serious accident.

Gen. Leon J. LaPorte, top U.S. military commander in South Korea, honored Company A with a plaque recognizing its achievement during a visit to Rodriguez Range on Monday.

Before presenting the plaque, Laporte donned a ground crewman&#8217;s helmet emblazoned with the words &#8220;New Guy&#8221; and helped load ammunition onto an Apache Longbow helicopter.

Battalion Commander Lt. Col. Chandler Sherrell, who just finished training 16 crews in gunnery skills at the range, said the company had done a good job looking after its personnel and the six Apache helicopters it operates year-round.

The award recognizes all of the soldiers who have served with the company over the past four years, he said.

&#8220;Flying helicopters is one of the most dangerous jobs in the Army,&#8221; Sherrell said. &#8220;Flying at this tempo, in this terrain, and in bad weather is what makes this award impressive. It shows attention to detail, discipline and understanding of the standards to maintain a record like this.&#8221;

The safety award recognizes the company has had no accidents in the past four years that resulted in expensive damage to men or machines. Each Apache Longbow is worth $30 million, officials said.

But more than the money, Sherrell said, protecting soldiers&#8217; lives is paramount.

For that reason, the battalion takes particular care to avoid friendly-fire incidents, he said.

&#8220;You have to have that constant awareness of safety, because safety is integral to everything we do,&#8221; Sherrell said. &#8220;Because of the attention to safety, when you get into combat you have the discipline to make sure the same safety standards are enforced.&#8221;