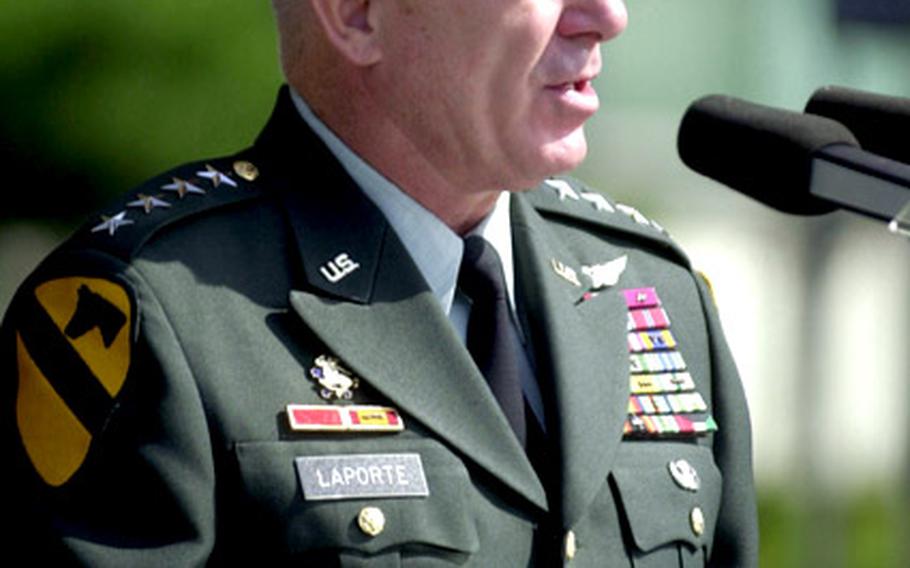 SEOUL &#8212; The top U.S. military commander in South Korea said Thursday that he has not seen a downgrade in North Korea&#8217;s conventional military capabilities despite years of economic decline.

&#8220;If they&#8217;re suffering economic demise, then it&#8217;s the North Korean people that are suffering, because they continue to have a military-first policy where they provide economic support to their military.&#8221;

In a wide-ranging speech and question-and-answer session, LaPorte commented on topics ranging from the 2-year-old Good Neighbor Program to U.S. forces&#8217; reduction and realignment plans in South Korea.

LaPorte was optimistic that an agreement soon could be reached on the timetable for removing 12,500 U.S. personnel from South Korea. Originally, U.S. officials wanted the reduction complete by the end of next year, but South Korean negotiators want at least another year.

&#8220;I&#8217;m confident that the consultations will continue in that vein and that in very short time, we will come to a mutually agreed-upon solution. &#8230; But there are many factors that must be considered relative to that decision. I can tell you confidently, they are all being considered and discussed. That&#8217;s why the process is taking so long,&#8221; LaPorte said.

The proposal drew concern in South Korea, with many fearing a &#8220;security vacuum&#8221; in the midst of the nuclear standoff with North Korea. LaPorte rejected that notion Thursday.

&#8220;As the combat commander here in Korea, I am very confident in the decisions we&#8217;ve made and in the fact that we&#8217;ve not created a security vacuum &#8212; that capabilities rather than a numerical number is what&#8217;s important,&#8221; he said, listing some of the $11 billion in high-tech upgrades planned for the next three years.

LaPorte also said initiatives such as the Good Neighbor Program &#8212; which emphasize bringing U.S. servicemembers and Korean citizens together in cultural and educational settings &#8212; have helped quell some of the anti-American sentiments mainly found in younger South Koreans.

&#8220;I would be less than honest if I did not say that expressions of anti-American sentiment have an impact on young U.S. servicemembers serving overseas. But I will tell you that impact on morale has been very minimal,&#8221; LaPorte said.