Lantz recalls his near miss with Woody Woodpecker 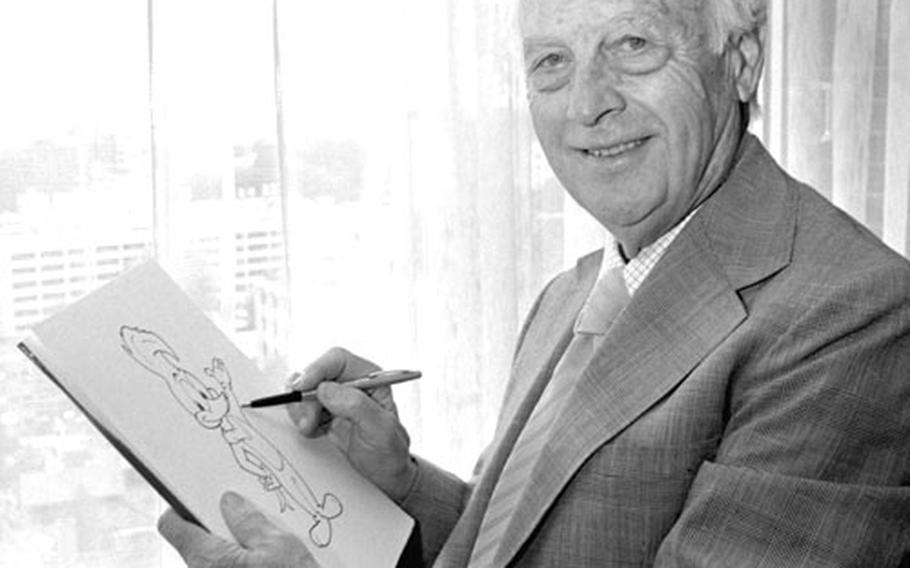 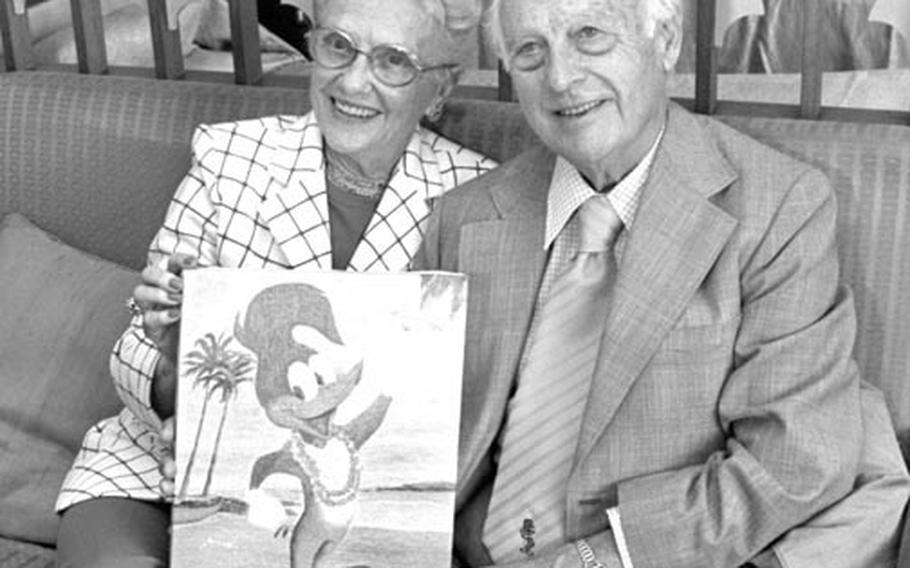 Buy Photo
Walter and Grace Lantz in Tokyo in May, 1979. (Chet King/Stars and Stripes)

TOKYO — Talking In an animated way, cartoonist Walter Lantz tells of how he could have blown it all — deprived himself and future generations of one of the greatest comedians of all time ...

Instead, Lantz turned to his drawing board and in a few deft strokes turned out an impudent comic he feels will walk in company with Charlie Chaplin and the greats of the 20th century.

At 79 the longest practicing film animator in the world, Lantz tells of how he transformed an expensive irritation into a wealthy fortune. In 1941, he relates, he married stage actress Grace Stafford and moved to a place he called Sherwood Forest, a mountain retreat 20 miles above Los Angeles.

Recalling Edgar Allen Poe's raven, there came a tap-tap-tapping — not at Lantz's window, but on his roof.

"This woodpecker was pecking on the roof all the time, annoying us so much that I tried everything I could think of to get rid of him," Lantz relates ruefully. "In fact, I was going to try to shoot him, which would be a terrible thing to do. He ruined my roof once or twice, and everytime he did that, it cost me two or three hundred dollars."

Grace Lantz knew her husband, a gentle soul, really couldn't do it.

"Gracie said, `why don't you have him join you? You've had Oswald Rabbit, you've had Andy Panda, Buzz Buzzard, all these characters. You've never had a woodpecker ...' "

In that first cartoon, Woody Woodpecker did a beak and wing on the roof of Andy Panda — a topical character Lantz had created after stepping into a cage with the first panda in captivity. Woody was an ugly, long-billed bird with a frowsy plumage — the way Lantz looked at him when the roofer said both shingle and asbestos were shot and a new roof was needed.

A star was born in gales of laughter. Woody became an adorable little cameo of a character known to millions. Until mounting expenses halted production of his finely-animated cartoons in 1975, Lantz turned out for Universal Pictures 250 six-minute cartoons that told of Woody's travails. No matter — the grandchildren of his first fans still watch, in theaters and on television, the 30-year-old cartoons that could have been made yesterday.

Woody still gets mounds of fan mail from all over the world. Children say they've loved him all their lives — every one of their five or six years. Lantz recently answered an appeal from a family who wanted to give their grandmother a special present for her 100th birthday — an autographed picture of Woody Woodpecker.

"Things like this are really rewarding," says Lantz, his eyes misting a bit.

On vacation in Japan with Grace, Lantz tells of how he saw his first cartoon, "Gertie the Dinosaur" in 1914 — painstakingly created from 10,000 drawings by artist Windsor McKay. An office boy for newspaper titan William Randolph Hearst on the old New York Journal, Lantz was abruptly graduated into an animation studio that made films of the Katzenjammer Kids and other Hearst comic characters.

And through the years, there was Beary Bear, Chilly Willy, Andy Panda and Woody — always Woody. Lantz kept strict, independent ownership of films he considers classics and treasures.

"I think that Woody and the other characters are going to be famous for centuries and centuries. They'll be known, I think, as the fairy tales of this century."

At the last Academy Awards, Lantz got an Oscar for Special Achievement in the film industry — one of only nine given in the 50-year history of the Academy of Motion Picture Arts and Science, to people like Chaplin, Bob Hope and Laurence Olivier.