Language with a twist: Naples base offers Arabic class 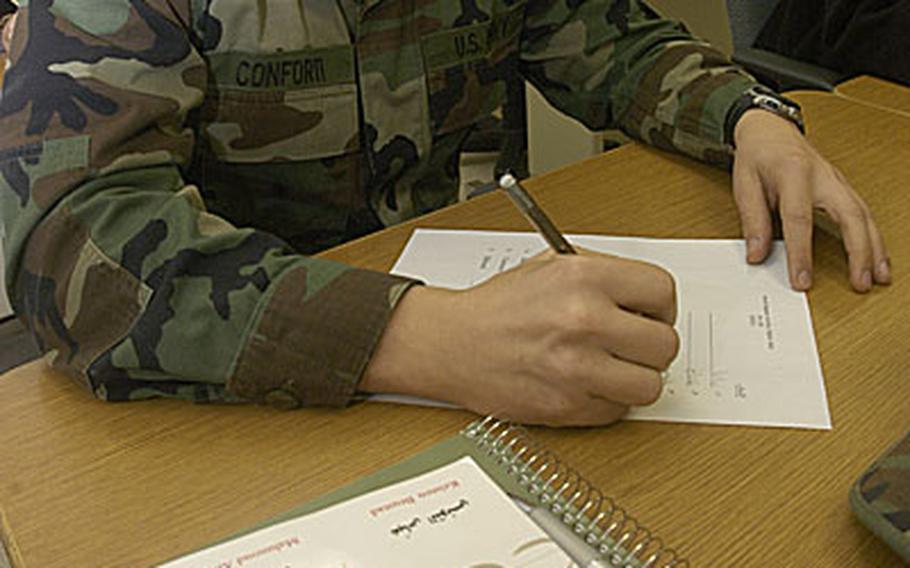 NAPLES, Italy &#8212; Troops and civilians living and working at this Navy base in southern Italy are hunkering down for an intense language class, but it isn&#8217;t Italian escaping their lips.

They&#8217;re learning to read, write and speak Arabic from Abdallah Tawfik, a visiting adjunct professor from the U.S. Naval Academy on loan to Naples for six months.

Lt. Cmdr. Kevin Melody said he signed up for the class with an interest in learning the Arab culture. &#8220;There is some cultural aspect in learning about a language,&#8221; said the officer assigned with Naval Forces Europe/6th Fleet. &#8220;Learning about a language can&#8217;t hurt. You get to understand both some of the language and understand some of the culture.&#8221;

The class is called Life-Saving Arabic. Tawfik chose the title after hearing a story coming from Iraq, in which, painted in Arabic on a billboard in Baghdad, was the word Qumbula. U.S. troops repeatedly, and unwittingly, drove by the billboard daily.

Tawfik, a U.S. sailor who is a machinist&#8217;s mate by trade, teaches the class twice a week at the Capodichino base during lunch, and at the support site base in Gricignano in the evening. He&#8217;s completed one eight-week semester, is in the middle of a second, and has plans for a third before heading back to Annapolis, Md.

Lt. Jamaal Parker recently completed the first semester. A contingency engineer and the humanitarian assistance construction program officer for Naval Facilities Engineering Command in Naples, Parker said he signed up because of a possible deployment to Afghanistan as an individual augmentee.

&#8220;I understand they don&#8217;t speak Arabic in Afghanistan, but I figured if I learned Arabic now, it would be easier to learn Pashto if the opportunity came up,&#8221; Parker said. Pashto is spoken in parts of Afghanistan and Pakistan and its writing is a modified version of Arabic.

Neapolitan Sara Pezone&#8217;s husband is Egyptian &#8212; but when they communicate, they do so in English.