Language no barrier to this company commander in Iraq 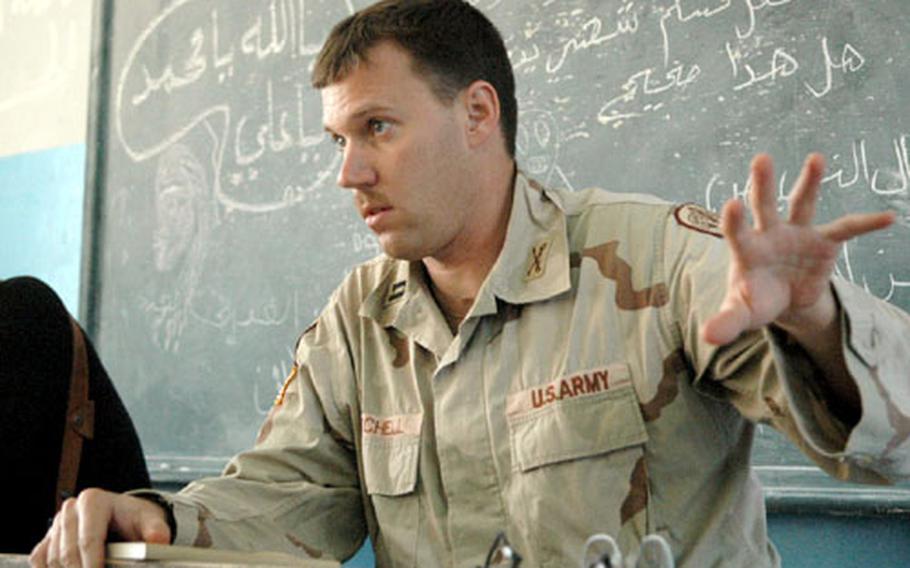 Capt. Gregory Mitchell, commander of Heavy Company, Sabre Squadron, 3rd Armored Cavalry Regiment, speaks in Arabic with a group of local men from the village of Shaykh Ibrahim, Iraq. He’s one of the few to survive an assassination attempt by local officials — in his case, an Iraqi police officer. (Monte Morin / S&S)

At this particular moment, Heavy Six was thinking that one of his soldiers was about to get himself killed.

&#8220;Hey! Get over here,&#8221; the commander of Heavy Company yelled from his Humvee. The soldier &#8212; a noncommissioned officer &#8212; was stopping traffic on foot near the center of this small, Sunni Turkmen town east of Tal Afar. The soldier wore a puzzled expression as he approached Heavy Six.

Then, lowering his voice for emphasis, Mitchell added, &#8220;Trust me on this. I was standing in your shoes exactly two years ago, man. They will cap your ass.&#8221;

As one of only a few U.S. command officers who speaks fluent Arabic and who has studied anthropology in the Middle East, the 34-year-old Dayton, Ohio, native enjoys a much fuller understanding of the region and its people than do many of his peers.

But as one of the few U.S. command officers who was also targeted for assassination by local officials, Mitchell&#8217;s understanding of Iraqis is often surpassed by his distrust.

The assassination attempt occurred during the 3rd Armored Cavalry Regiment&#8217;s first deployment to Iraq, when Mitchell worked as a government assistance officer in the small town of Rutbah near the Syrian border, in Anbar province.

Mitchell was on his way to a meeting with the town&#8217;s mayor when a bomb planted in the front steps of the municipal building exploded. The blast shredded Mitchell&#8217;s protective vest and left scars on his left arm and right hand. An Iraqi police lieutenant had planted the bomb, he said, as retaliation for Mitchell&#8217;s efforts to help clean up a corrupt police force.

Mitchell&#8217;s general suspicion appears to be finding confirmation in Muhallabiyah, a town of 2,000 in northwest Iraq that was once closely allied with Saddam Hussein&#8217;s Baathist regime. The town stands at the foot of the Shaykh Ibrahim Mountains and overlooks rolling, wheat-growing plains some 15 miles southeast of Tal Afar.

Earlier this month, a detail of Iraqi police from Mosul swept into the town and raided the homes of seven police department officers &#8212; including a lieutenant &#8212; and took the officers into custody on suspicion of corruption. A week before that, Mitchell&#8217;s company destroyed two homes that contained an arsenal of weaponry as well as toxic chemicals and photocopied textbooks on the use and production of poisons. The homes were ordered destroyed because of chemical contamination.

Mitchell said that because insurgents are taking refuge in this area, it will be necessary to continue periodic offensive operations in order to keep Tal Afar. He also recommends that the Army bypass traditional tribal leadership as it works to create relationships with local residents.

&#8220;To deal closely with the sheiks encourages a nondemocratic and medieval order,&#8221; Mitchell said. &#8220;It&#8217;s all tied to patriarchy and nepotism. We need to deal with the educated classes. We need to get away from the methods that the British and Saddam used and relied on &#8212; the tribal leaders. In this area they&#8217;re completely unreliable.&#8221;

He said that he views his job as standing up the Iraqi army in the area of Muhallabiyah and preparing them to battle the insurgents on their own.

&#8220;Our job should be to clear and hold and allow the Iraqi security forces to take root,&#8221; Mitchell said. &#8220;Every unit that comes in wants to be the heroes. They want to be the ones to clean up the city. What they don&#8217;t realize is a whole new set of insurgents is coming in. There is no decisive battle, no cordon-and-search operation that will solve everything. All we can do is shape the battle space for the Iraqi security forces.&#8221;

Before joining the Army, Mitchell entertained the idea of becoming a teacher. He began studying anthropology at Washington University in St. Louis, and spent his last year before graduation at the University of Cairo in Egypt. He spent another year at the American University of Cairo under the National Security Education Program, which encourages the study of non-Western languages and careers in public service. He entered the Army in 1997.

Mitchell concedes that anthropology is an unusual educational background for the commander of a tank company. In this conflict, however, it has paid serious dividends, he said.

&#8220;In a counterinsurgency, you have to understand the culture and the language,&#8221; Mitchell said. &#8220;When you understand those things, you have a better understanding of the terrorists.&#8221;