Language no barrier for U.S., Japanese scouts at Patrol-O-Ree 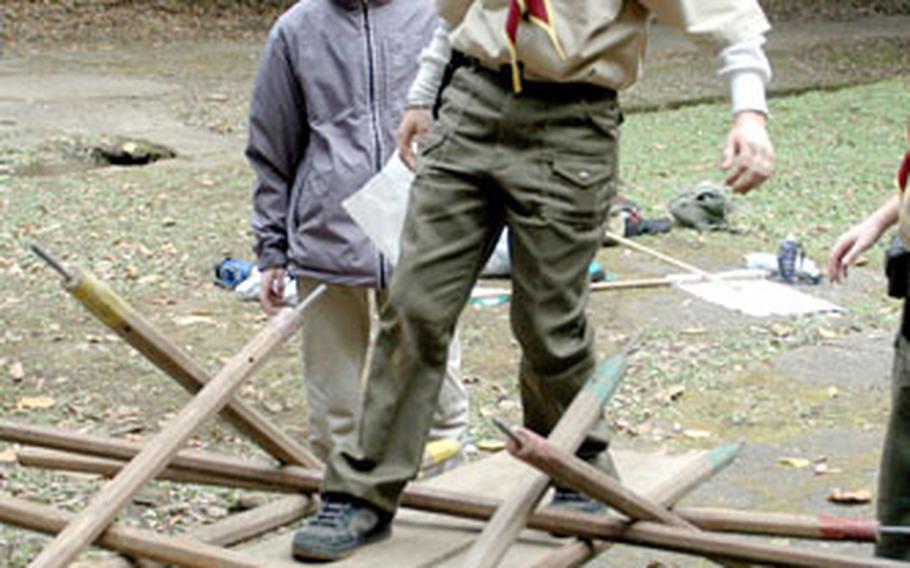 A member of Patrol I tests out a friction bridge built by his patrol at the Fall Patrol-O-Ree at Tama Hills Recreation Area. Building the bridge was one of the many challenges the scouts had to overcome during the event. (Bryce S. Dubee / S&S) TAMA HILLS RECREATION AREA, Japan &#8212; More than 350 Boy Scouts and Scout leaders from the Boys Scouts of America (BSA) and the Scouting Association of Japan (SAJ) came together this weekend for the annual Friendship Patrol-O-Ree at Tama Hills.

SAJ scout troops from throughout the Tokyo area participated.

The two organizations are not very different with the exception of a few cultural differences, explained Keisuke Hara, a Prefectural International Committee member of the Tokyo Scout Council.

&#8220;It is great fun to watch the Scouts from both countries come together, find a way to communicate, and then work as a team to overcome obstacles,&#8221; said Carl Frentz, the event director, in a news release.

Orienteering, fire-building, first aid and even tomahawk throwing were some of the challenges Scouts faced.

One of the more interesting challenges had the patrols build a &#8220;friction bridge,&#8221; a bridge made of poles and boards that is held together by its own mass, without any ropes or nails.

The event culminated in a campfire ceremony and pot luck in which each troop brought a dish to share, putting yakitori and udon alongside brisket and cobbler.

For more information about Scouting in Japan go to www.fareastbsa.org.