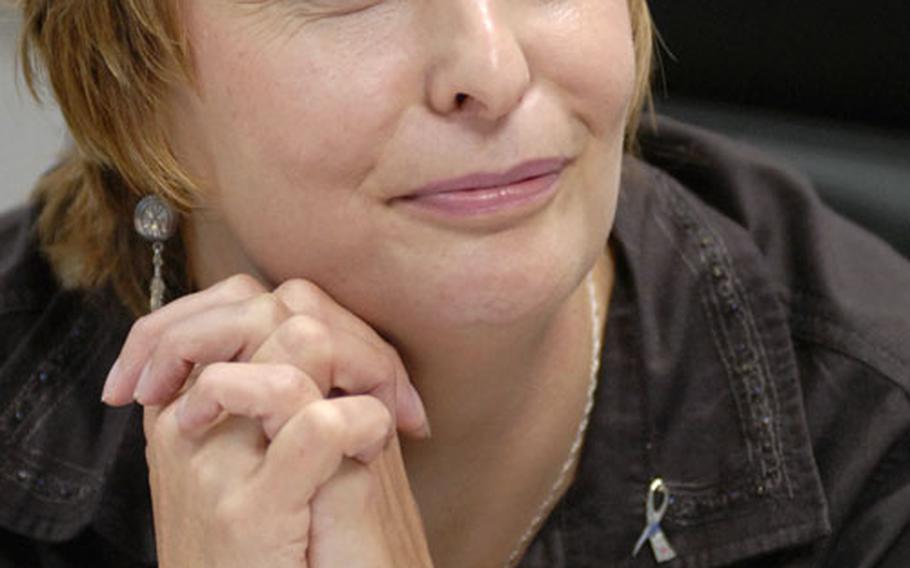 Cancer survivor Elvira Wortmann will be among the participants in the cancer awareness walk/run this Saturday at Landstuhl. (Ben Bloker / S&S)

LANDSTUHL, Germany &#8212; Being diagnosed with breast cancer is not a death sentence.

Just consider Elvira Wortmann, who was first diagnosed with breast cancer two years ago. The wife of a retired soldier is now cancer-free after surgery and chemotherapy. She is full of energy, has a full head of hair and plans to participate in a breast cancer awareness walk/run Saturday at Landstuhl Regional Medical Center.

As a breast cancer survivor, Wortmann is an advocate for awareness. So is her husband, Paul.

The 8 a.m. walk/run at Landstuhl is in conjunction with national breast cancer awareness month, which has taken place every October since 1985. The aim of of the month is to increase understanding of breast cancer issues, especially the importance of early detection.

In America, an estimated 211,000 people were diagnosed with breast cancer in 2003 and 40,000 died as a result, Flynn said. Only about two-thirds of American women who should be getting mammograms are undergoing the procedure on any given year.

Women who have mammograms every one to three years reduce their risk of dying from breast cancer by 30 percent, according to research on the topic.

Between the ages of 18 and 20, women should start performing self-exams once a month, he said. Flynn cited a statistic that between 70 percent and 80 percent of breast cancers are self-detected.

After the age of 40, women should get mammograms every one to two years. Women older than 50 should receive mammograms annually.

Flynn said the awareness programs are to remind people that people are at risk.